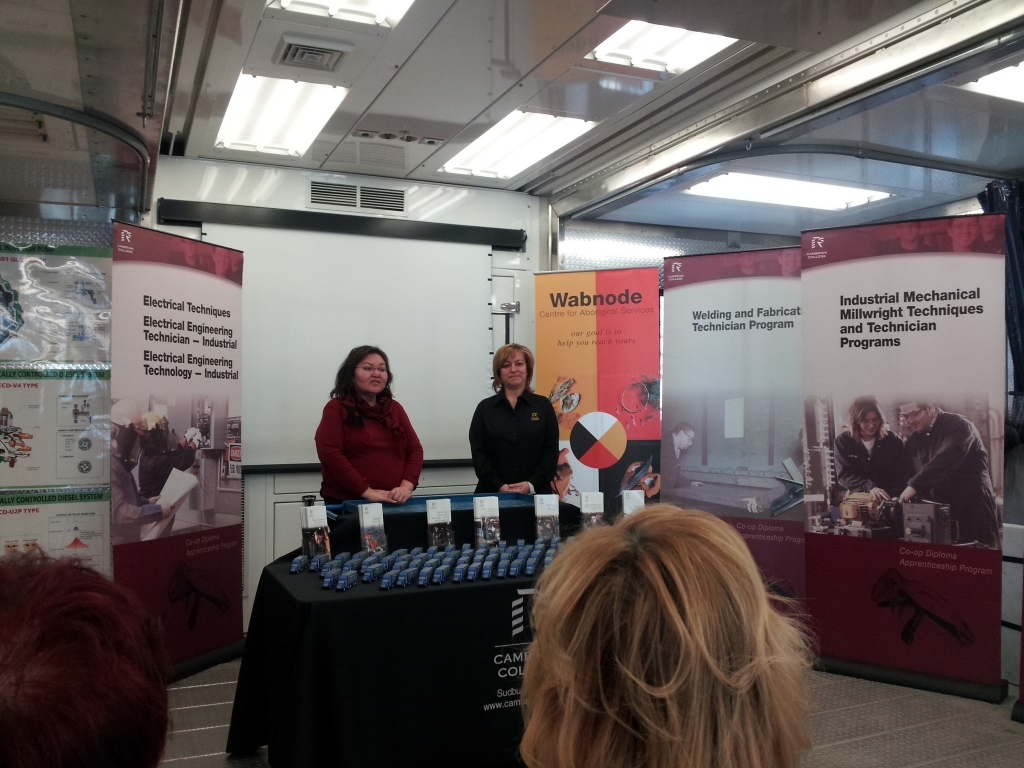 A one-week Ring of Fire job shadowing placement is featured in the Oshki-Pimache-O-Win Mining Essentials program that begins next week in Webequie.
“We’re going to send 16 Mining Essentials students to the Ring of Fire for job shadowing,” said Peter Rasevych, Mining Essentials program coordinator. “Whichever trade area they felt they had an interest in, they could job shadow on the Ring of Fire site for a week.”
Rasevych said most of the 16 students — one woman and a wide range of men — enrolled in the Mining Essentials program already know which trade they want to specialize in.
“They know exactly what trade they want to focus on and it’s heavy equipment mechanics,” Rasevych said. “They really want to get in there with the machines. Some like electrical, a couple carpentry.”
The Mining Essentials’ students will be taught in their own community over the next few months in a mobile trades training trailer developed by Cambrian College.
“The Cambrian College trailer is going to be used to deliver pre-trades training — like learning how to fix small engines,” said Gordon Kakegamic, Oshki’s e-learning coordinator. “We even had the instructor tell us, ‘If one of our students has a snowmobile that needs servicing, they can actually tow the snowmobile inside the trailer and all the students can work on the snowmobile.’”
The 12-week Mining Essentials program, which is being provided through $597,000 in funding from the province, includes 240 hours of classroom training in the portable classroom and 120 hours of enrichment activities such as applied training and practical training in the Cambrian College trailer.
“It’s all community-based training,” Kakegamic said. “Instead of students coming out to places like Thunder Bay to get vocational type of training, we’re bringing the training to them. The (Cambrian College) trailer is going to be travelling on the winter road and the trailer will be parked in the community as long as we can have it there.”
Kakegamic said the Cambrian College trailer, which includes a 2,000 pound crane for lifting equipment, will be stationed in Webequie for at least four weeks and possibly six weeks depending on winter road conditions.
“They’ll go for their classroom sessions in the portable to learn the life skills and job readiness training,” Rasevych said. “Then they’ll get their practical (in the Cambrian College trailer). They want to get their hands dirty. They want to take transmissions apart, and not just small engines, but they’re going to be doing heavy equipment diesel mechanics.
They’ll be doing power steering fluid systems, hydraulic systems, brake systems, electrical.”
Rasevych said the Cambrian College trailer, which also includes a welding shop and some carpentry equipment, will provide the students with hands-on experiential applications without having to leave their home community.
“They won’t have to leave their kids,” Rasevych said. “They’ll walk out the door in the Webequie First Nation community after having their bacon and eggs in the morning, and voila, nobody has to go away for hotel accommodations and meals hundreds of miles to the south anymore.”
Kakegamic said the students will earn two certificates when they graduate, a Mining Essentials certificate from the Mining and Human Resource Council and an Introduction to Trades certificate jointly issued by Oshki and Cambrian College.
“Mining Essentials is a new standard,” Kakegamic said. “It’s a standard that is becoming more recognized by the mining industry. If you have your Mining Essentials certificate, definitely for sure you have an advantage in getting employment in the mining industry.”
Kakegamic said the Introduction to Trades certificate can be applied as credit hours to Pre-Apprenticeship Level 1 programs.

We Are Not The Wild West