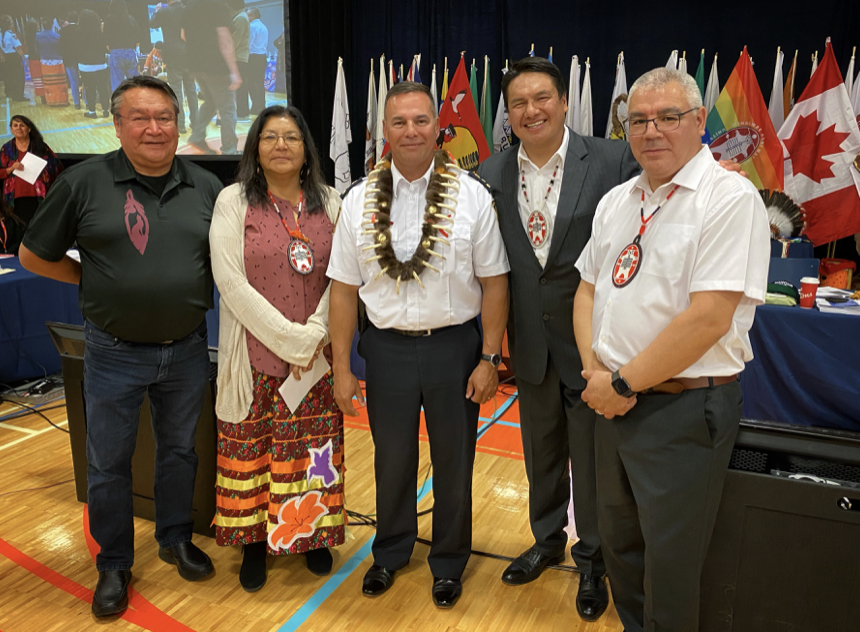 Nishnawbe Aski Police Service Chief of Police Roland Morrison was honoured with a bear claw necklace for his 25 years of service on the second day of the Keewaywin Conference, held Aug. 9-11 in Timmins. Screenshot from NAN Facebook page.

Timmins Mayor Kristin Murray and Nishnawbe Aski Police Service (NAPS) Chief of Police Roland Morrison were recognized for their leadership roles on the second day of the Keewaywin Conference, held Aug. 9-11 in Timmins.

Murray, a Chapleau Cree citizen who was elected as a Timmins councillor in 2018, was appointed as mayor on Aug. 9 for the remainder of the 2018-2022 term after serving as deputy mayor.

“I am a descendant of a signatory to Treaty #9, Henry Saylors (Sailor, signed in Cree syllabic), and last night I became the first Indigenous mayor of the City of Timmins,” Murray says. “It’s so exciting — I ran for Council in 2018 and there was a lot happening in the city. I’ve lived in Timmins since 2001, I came here for college, a 17-year-old who was going to change the world, go back to my community and really help, but I stayed in Timmins and I’m doing what I can.”

Murray says the deaths of two Fort Albany citizens in Timmins, Joey Knapaysweet and Agnes Sutherland, who had travelled to the city to access health services, compelled her to run for Council.

“That really compelled me to want to run because there’s a lot of injustices that are happening to our people in urban communities, and I felt if not me, then who,” Murray says. “I saw the slate of candidates and I’m like these are not people who represent me and my kids, they’re not people who can speak for me or make decisions for me, so I ran.”

“They spoke very clearly because I’m the first person to get that many votes on the City of Timmins Council,” Murray says.

Murray says there are opportunities for Nishnawbe Aski Nation (NAN) in Timmins.

“There’s agreements that exist with Mushkegowuk, and that’s great, but I wonder about NAN,” Murray says. “There’s opportunities for us to work together, to build those strategic partnerships and alliances, to build capacity on both sides. So that’s why I’m here today, to say genuinely: ‘Let’s walk together and create good things for the people in our community, because there’s a lot of Indigenous people in the City of Timmins.’”

Morrison was honoured with a bear claw necklace in recognition of his 25 years of service with NAPS.

“I’m truly honoured — this is such a beautiful gift,” Morrison says. “I’m going to let you know that Eric Cheechoo is the reason I’m standing up here. I started off as a guard in Moose Factory and Eric was the sergeant there and I got an opportunity to see how to give back to the community.”

Morrison says he has had a great career at NAPS.

“I love our NAN territory, I love the people in the territory,” Morrison says. “That’s why I’m committed to our territory, to improve it, to make it a better place for our people, to stop the harm that’s plaguing our people. But I can’t do it alone.”

Morrison says it is important to acknowledge the efforts of the NAPS officers who are working today.

“Many of them are working alone, and it’s important that we acknowledge that,” Morrison says. “Policing is a rewarding career, but it’s also a very challenging and tough career — it comes with a lot of hardship, a lot of sacrifice. But I will let you know the officers working for Nishnawbe Aski Police are committed to our territory, to making sure our communities are safe.”

Morrison says he is very honoured to be recognized with the bear claw necklace.

“I’m very surprised for this,” Morrison says. “Thank you very much for this completely wonderful honour. I am not going to stop doing what I do, I will be advocating on behalf of NAPS to our governments, to the other police services that we work with, when it comes to our service, making sure that we’re doing what we’re supposed to out on the frontline making sure our communities are safe.”

Morrison says he enjoys his job.

“I love my job, I love what I do and I’m not going to stop doing it,” Morrison says.