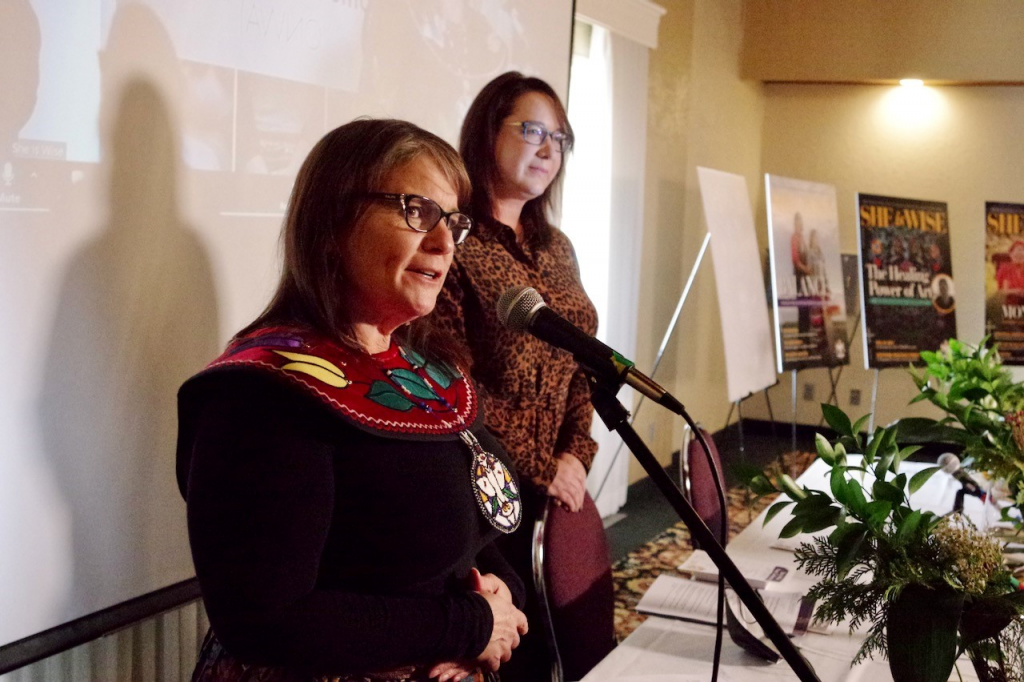 The Ontario Native Women’s Association (ONWA) celebrated its 50th Anniversary with the commemoration of three generations of Indigenous women in leadership at the 50th Annual General Assembly at the Best Western Nor'Wester Hotel and Convention Centre near Thunder Bay.

“We are here to celebrate 50 years of this association,” says Dawn Lavell-Harvard, outgoing president at ONWA. “And I realized just how important it is that we are gathered here today to celebrate, that we’re not just surviving any more, we’re thriving.”

Lavell-Harvard, daughter of ONWA co-founder Jeannette Corbiere-Lavell, announced at the 50th Anniversary celebration that she was stepping down from her role as president at ONWA after serving for the past 18 years.

“Carrying the legacy of leadership from my mother, Jeannette Corbiere-Lavell, it has been my mission to support and advocate on behalf of Indigenous women’s rights, always working toward the empowerment of Indigenous women and their families,” Lavell-Harvard says. “In doing so, I hope that I have honoured her and those who have walked with me and mentored me on this journey.”

Cora McGuire-Cyrette, executive director at ONWA, says it is an “honour” to work to get Indigenous women recognized, to get their issues at the forefront and to create programming and services that meet their needs.

“We’re going to continue to grow, we’re going to continue to do the amazing work that we’ve been doing for the past 50 years,” McGuire-Cyrette says. “We celebrated providing services to over 55,000 people in one year during the (COVID-19) pandemic, so that really goes to show when we collectively work together as a team to meet the community’s needs what we can accomplish together.”

McGuire-Cyrette says ONWA plans to continue to ask women in the community what their needs are and what issues they are facing.

“A lot of people don’t believe the truth of what is happening, so we’re going to continue that advocacy, we’re going to continue to fight to be recognized,” McGuire-Cyrette says. “Indigenous women have the right to be safe in our communities — our community isn’t safe if Indigenous women aren’t safe, so that is what we have to begin by recognizing.”

The 50th Annual General Assembly featured the election of Debra Vermette as president and Autumn Cooper as vice president and the recognition of McGuire-Cyrette for receiving the Women’s Executive Network WXN Mercedes-Benz Emerging Leaders Award for women aged 30-45 who have a proven passion for learning and innovation within their organizations.

Vermette, executive director at Beendigen Anishinabe Women’s Crisis Home and Family Healing Agency, believes leadership is an ongoing journey that takes willingness to watch, listen and learn from others.

“To me, a leader is a visionary – individuals who can see the big picture and bring a team together with the goal of bringing it to life,” Vermette says. “And I don’t just mean in business. Leaders are in every aspect of our lives; they are our mothers, fathers, family, and friends. They are throughout our communities and the world.”

Cooper, Indigenous education student at Trent University and daughter of Lavell-Harvard and granddaughter of Corbiere-Lavell, spoke about how growing up around Indigenous women leaders, like her grandmother and mother, allowed her to be secure in her identity.