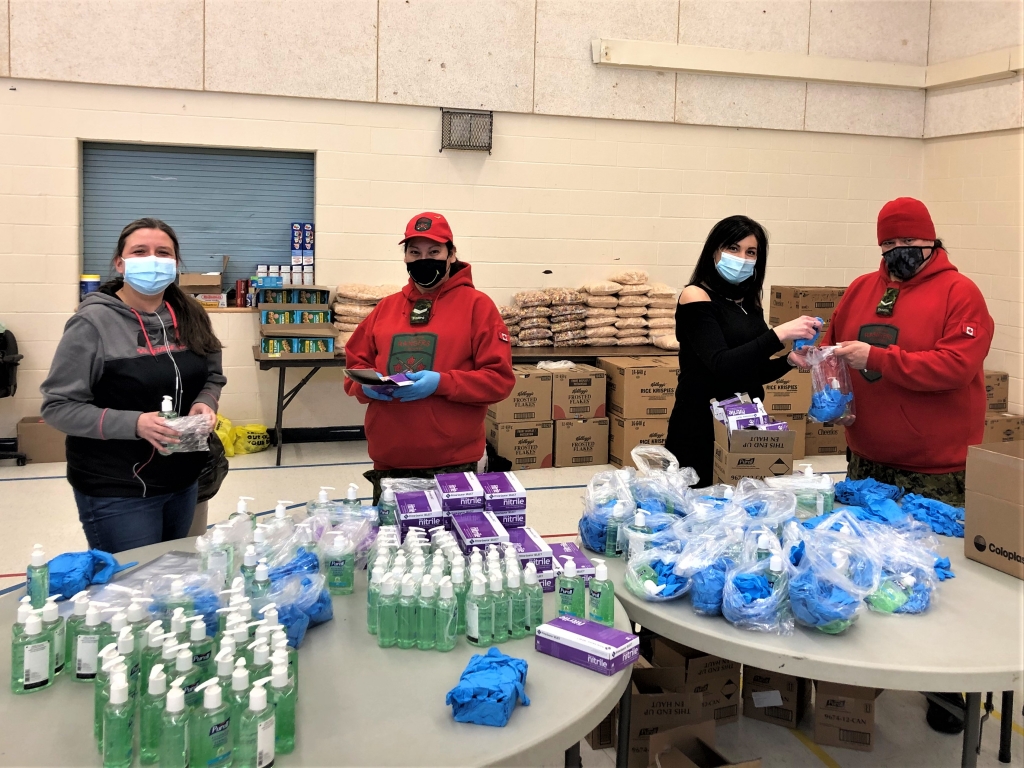 The well-known red sweaters worn by Canadian Rangers are boosting the spirits of a tiny First Nation in the midst of a Covid-9 crisis in Northern Ontario.

The six-member Ranger team arrived in Ginoogaming First Nation on Monday to assist the community after it requested military assistance.

Ginoogaming is an Ojibway community about 310 kilometrers northeast of Thunder Bay. It has a population of about 200.

On January 31 it reported nine active cases of Covid-19. Four cases have since been resolved leaving five active. The community asked for military assistance and the Canadian Army authorized the use of Canadian Rangers to provide support to the distressed community and its exhausted health workers. The Rangers are part-time army reservists.

“Seeing the Rangers in their red sweaters, which are a distinctive part of their uniform, has been welcomed by community citizens,” said Warrant Officer Carl Wolfe, a Canadian Army instructor.

“We going to be helping to distribute food and personal protective equipment,” he said. “We’re going to distribute educational materials to help the population understand the importance of following Covid guidelines and we’re going to assist in planning and helping them get ready for their next step, which will, hopefully, be to get the community vaccinated, but there’s no set date for that at the moment.”

The community is locked down and closed to visitors, except for residents and essential workers, with peoples’ movements carefully controlled.

“I’m exhausted and a lot of our other staff are exhausted,’ said Sheri Taylor, a band councilor and the community’s health director. “Six Rangers may be a small number to some people but to us it’s huge. They are our own people and they understand life in an isolated or semi -isolated community in the North. We are so happy to have them here.”

Ranger Jody Grenier, one of the Ranger team, is from the nearby Long Lake No. 58 First Nation, which is also in lockdown. “I’ve been a Ranger for two years,” he said, “and this is an honour for me to be here to help the people of Ginoogaming. I’m glad to be part of this operation and be able to help my people.”

The Rangers in Ginoogaming were a Ranger Go Team on standby in Thunder Bay, ready to respond if needed while a mass inoculation program reaches up to 32 First Nations across the Far North of Ontario.

When the team was dispatched to Ginoogaming on Monday another Ranger Go Team replaced them in Thunder Bay. Ranger Go Teams are ready and able to respond quickly to provide support anywhere across the Far North of Ontario.

“We’re very happy that we could respond in a timely way to meet the needs of the community,” said Lieutenant-Colonel Shane McArthur, the army officer who commands the Rangers of Northern Ontario. “They’ll do a good job, as usual, in their red sweaters.”