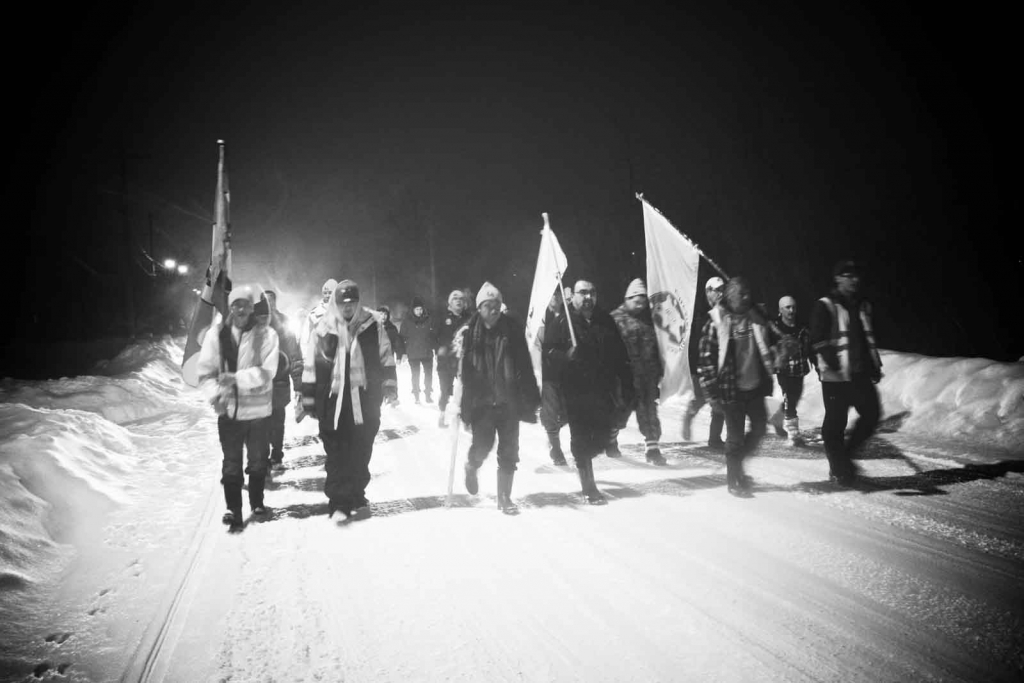 Attawapiskat’s walkers arrived in the Moose River Valley on a grey and overcast Monday afternoon.
The original group of three left Attawapiskat on Jan. 4 and arrived in Moosonee and Moose Factory 10 days later.
To this point their journey has seen more than 300 kilometres along the James Bay coast of Ontario.
They have been joined by more walkers in each community they passed through, including Fort Albany’s 27-year-old chief, Rex Knapaysweet.
Danny Metatawabin, spiritual leader of the group, has led the walkers — now numbering seven — on a path that leads to Ottawa.
Their goal is to address federal and provincial government officials with a demand that the treaty and ancestral land claim rights of Canadian First Nations be respected.
“We’re really proud of these guys,” said Moose Cree Chief Norm Hardisty, as he and the deputy chief Earl Cheechoo walked onto the winter road to meet the group just outside Moosonee.
The two were part of an exuberant welcoming committee made up of people from the community.
The group appeared weather-tempered; some displayed noticeable limps as they crossed into Moosonee. Yet they walked on and the crowd cheered every step.
After the welcome, the walkers made their way through the community to the Moosonee Elder’s Centre.
The group was given a police escort and residents of Moosonee emerged from their homes to greet the men as they passed.
“They’re here, it’s really them,” said a pre-teen girl standing on a street corner with a group of other children.
At the Elder’s centre, the walkers were met by an electrified crowd, including Attawapiskat Chief Theresa Spence and other local leaders.
“It’s his [Metatawabin’s] journey, his message, his moment. I support him as his chief. I worry about what they go through to spread this message, the cold they must go through,” she said.
The gathered crowd then shared a meal and heard speeches from the walkers.
As they left Moosonee, their numbers grew and they gained a new flag to carry across the Moose River.
Hardisty raised the flag of Moose Cree First Nation as they crossed the ice road to Moose Factory Island.
The ice was jagged and jutted out in different directions from a freeze-up in the fall.
A Moose Cree work truck with a warning light on top of its cab escorted the band of walkers to Moose Factory.
Temperatures were mild and temperate, laying an evaporating haze on the ice.
“We made it,” exclaimed a child near the end of the group as they walked up the bank of on the island.
The road was bathed in the amber light of overhead street lamps as the walkers and a convoy of vehicles moved along the river road headed north to the Cree Cultural Interpretive Centre.
At the centre, the walkers were led to a large cook tent where three fires and the wood stoves heated the inside of the large teepee, called ashapitawan.
There, they were fed bannock washed down with coffee and tea. Community leaders spoke and welcomed one another in both English and Cree.
The walkers, from reserves in Attawapiskat, Fort Albany, Moosonee and Moose Factory, made plans for the next stage of their journey to Ottawa.
Next, they will leave Moose Factory bound for Otter Rapids, Cochrane and Timmins then on to Ottawa.
Metatawabin says the group is focused, with a fierce song in their hearts and a message to present to the federal and provincial governments.
As of Feb. 16, the walkers have passed Deep Water, Ont., and are heading east on Highway 17. They expect to arrive in Ottawa on Feb. 24.
This story was produced with guidance from Danny Kresnyak of Journalists for Human Rights as part of JHR’s Northern Ontario Initiative. Wawatay Native Communications Society is a partner in the program.
This article was originally posted on cbc.ca/aboriginal.
Reprinted with permission.