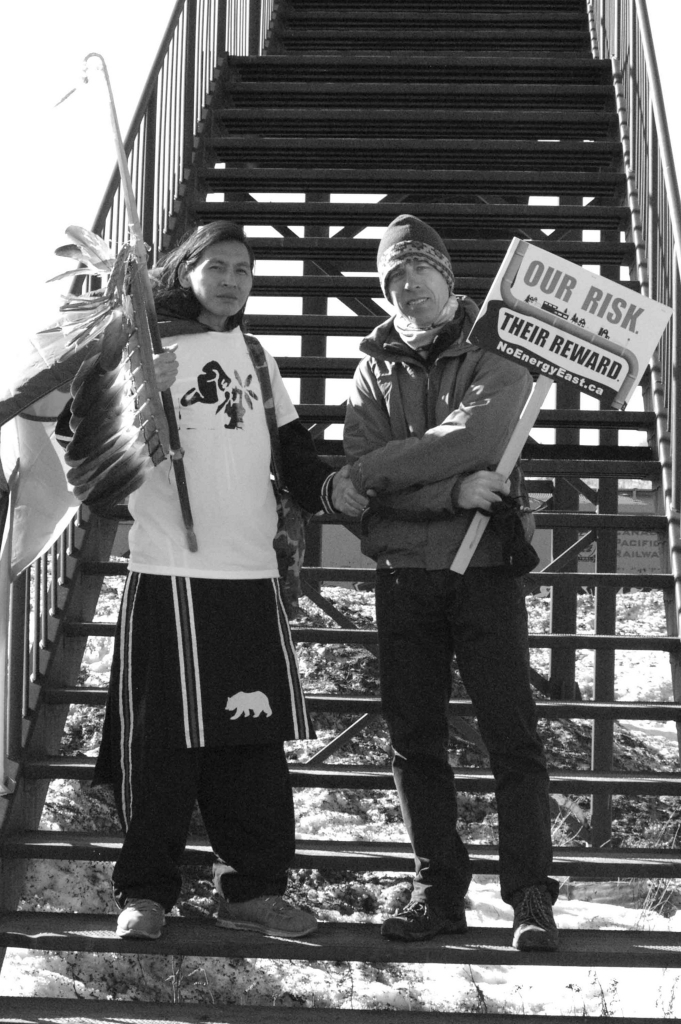 An open forum on the TransCanada Energy East Pipeline proposal in Thunder Bay was met with debate and protests by First Nations members and other organizations on April 9 and 10.
The proposed 4,600-kilometre pipeline is expected to carry 1.1 million barrels of crude oil daily across Alberta, Saskatchewan, Manitoba and Ontario to reach refineries in Quebec and New Brunswick.
Hundreds of people attended the open forum held at the Lakehead Labour Centre, and many raised concerns about potential spills and the impact on the environment.
Among them was Keywehnini, a member of Mishkeegogamang First Nation who is advocating the protection of northern Ontario from the Energy East Pipeline project.
When he had the floor, Keywehnini talked about a painting he created that represents the prophecy, where a serpent with a war club fights the four feathers representing all races and a man representing all people.
The prophecy said when the serpent comes to make its way across Turtle Island, the people, the human family including the red, white, yellow and black nations, are to rise and wake up and fight the serpent.
This serpent will poison water, destroy our lands and our ‘human’ way of life, he said.
The pipeline will cross 90 watersheds. A lot of muskeg, water systems and traditional food sources along the pipeline cannot afford to be affected by a potential oil spill, said Keywehnini.
“The pipeline will affect our water,” said Keywehnini. “It is the main source that gives us life.”
The pipeline routes will pass through a number of First Nation territories across the provinces.
In northern Ontario, the pipeline passes through Nipigon River that flows into Lake Superior, affecting signatories of the 1850 Robinson Superior Treaty.
Members of the Council of Canadians (COC), a social action organization with 60 chapters across the country, were also at the open forum.
COC chairwoman Maude Barlow was also worried about the impacts the pipeline could have to the Great Lakes and other fresh water sources in northern Ontario.
“We are a world running out of clean water,” said Barlow. “Canadians are blessed with clean water. In my opinion, we have to be extra vigilante to be stewards and take care of it.”
The Pembina Institute, a non-profit research organization that focuses on sustainable energy, released a preliminary assessment on the pipeline project in February. The study showed that the pipeline project would lead to 32 million tonnes of additional greenhouse gas emissions each year and 650,000 to 750,000 barrels per day of additional production from expanded oil sands.
Despite the environmental concerns, TransCanada says the project will create thousands of direct full-time jobs and billions of dollars will contribute to Canada’s economy.
TransCanada commissioned Deloitte & Touche LLP to complete an economic benefit study. The report forecasted $10 to $25 billion dollar in GDP and 91,000 jobs in the construction phase of the energy pipeline expansion.
But Barlow said the project job and economic benefit to Canadians won’t be anywhere near what TransCanada Energy East Pipeline project promises.
COC released a report stating 90 per cent of the Energy East Pipeline project will be exported to places like Asia and Europe and only major oil companies will profit.
“We say our risk and their reward,” said Barlow. “The risk is on the side of Canadians, particularly many First Nation communities.”
Barlow also noted that the federal government gutted environment acts like the Fisheries Acts, Navigable Waters Act and the Environmental Assessment Act through Bill C-45 in December 2012 – the very bill that helped ignite Idle No More protests that winter.
Protesters at the time allege the changes to those legislation was to allow the acceleration of the development of projects such as the TransCanada Energy East Pipeline.
“The very laws to protect our water are gone and the only laws left really are the treaties,” said Barlow. “Treaties protect us between absolute lawlessness.”
A Dene activist from Athabasca Fort Chipewyan First Nation (ACFN) in Alberta was also on hand for the open forum.
Eriel Deranger, who is also the communications coordinator for ACFN, said the Alberta tar sands and its expansion directly impacts risks to the drinking water, fishing, hunting, trapping and traditional food gathering and increases of cancer to the self-governing community of ACFN.
“We are not directly impacted by the Energy East Pipeline,“ she said. “But we are indirectly impacted by the expansion of the oil tar sands.”
Environment pollutions are directly affecting the ecosystem and signs of it are showing up as tumours, lesions, discolour and meat tastes in species, said Deranger.
“There have been confirmed studies of traditional foods showing arsenic and hydro carbons,” said Deranger. “Basically a slew of cocktails are being found in foods we should not be consuming.”
The community doesn’t know how surrounding water is being distressed, said Deranger. What they do know is community members can’t travel far to hunt and fish because they have to carry drinking water with them to be safe.
“Despite growing health concerns in the tar sands area, Alberta Health Services does not have any plans to do any health studies in the region,” said Deranger.
ACFN is looking to have independent health studies conducted to investigate increased cancer rates and other community health concerns.
Deranger said she doesn’t want to see First Nations communities across Canada continue to be effected by industry like her community has been.
The day after the forum, a protest took place with members of COC and First Nation and community allies at the corner of Gore Street and Brown Street near the CN rail oil trains shipping yard.