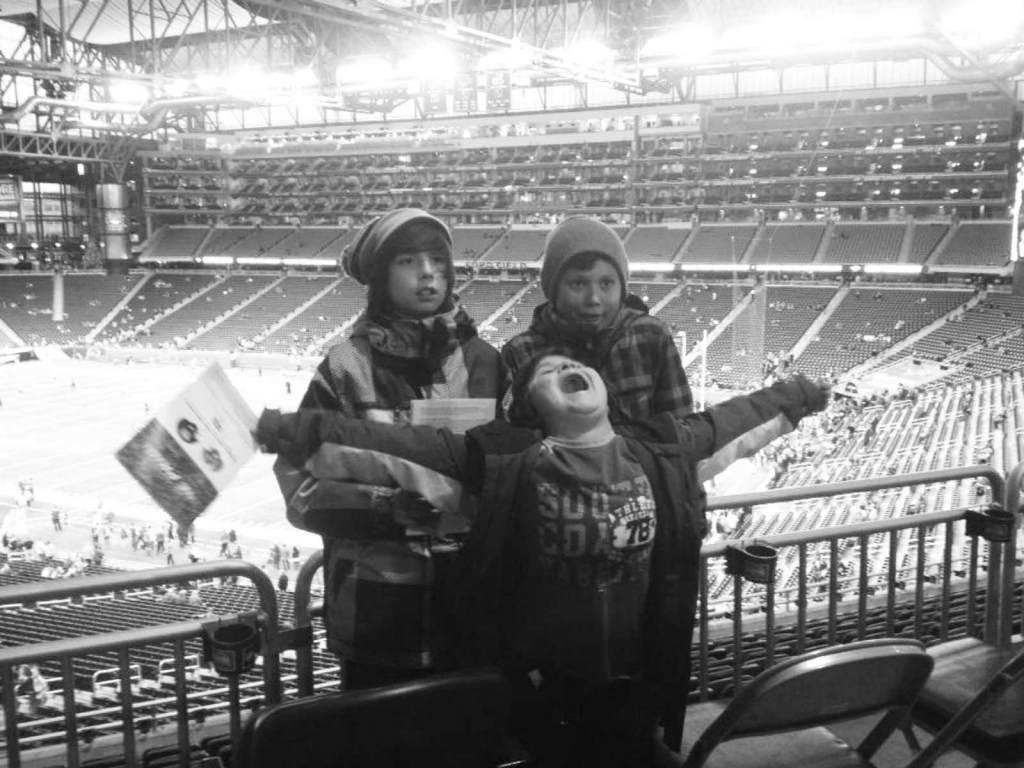 A Sault Ste. Marie Aboriginal youth group attended a National Football League (NFL) game in Detroit last month.
The trip was the culmination of fundraising efforts from a Football Leadership Program that was started by the Sault Ste. Marie Indian Friendship Center’s Cultural Connections for Aboriginal Youth (CCAY) program and the WasaNabin program.
Melodie General, CCAY Coordinator, said that it was concerns from the youth’s parents about their education that helped bring about the Football Leadership Program.
“The parents noticed that their sons were not taking their education, extra-curricular and community volunteering serious after football season was done,” General said. “The workers met and discussed options to help encourage and support these young men.”
General said that the outcome of the meeting was plans for a trip to a NFL game.
“We chose a Detroit Lions vs. New York Giants game,” General said.
General said they put a call out to local First Nation, Metis, and Inuit football players aged 10-24 years to attend the trip as part of the Football Leadership Program.
Cheryl Suggashie of Pikangikum First Nation is an assistant with CCAY. Suggashie said that given the time frame of the game and the formation of the program, a lot of fundraising had to be done in a small amount of time in order to make the trip happen.
“The parents were essential in fundraising and were more than happy to help,” General said.
The group received donations, including a raffle table, from local businesses and community members such as Gusto’s Bar and Grill, Elizabeth Fantham, Dreamcatchers Fund, Garden River Bingo Hall, Chili Willie’s Bar and Grill, Professional Auto, Family Tree in Garden River, and Perrault’s Gas Station.
The group succeeded in raising enough money for the program and its youth members to attend the game in Detroit.
“We rented a charter bus from Great Lakes Bus Tour,” General said. She said 25 people boarded the bus at 5 a.m. on Dec. 22.
“Before leaving, we reminded the youth that they were representing their First Nations, schools, communities, CCAY/WasaNabin program, and our country as well,” General said.
Suggashie said that the group had to drive through a snowstorm in the bus on the way to Detroit.
“The big coach bus was fishtailing and going 70 kilometres an hour,” Suggashie said. The group made it safely to their Detroit destination.
“When we were driving into the city, the youth were pumped because we were all looking forward to seeing ‘8 Mile Road,’ Eminem’s old neighbourhood, but we all totally missed it because we were socializing and laughing,” Suggashie said.
She said that the group arrived two hours early to the start of the game. The youth were able to explore the stadium, and even get close to the NFL players.
General said that she felt emotional over watching the youth’s reactions to being at the stadium in Detroit.
“As a youth worker, striving to encourage, support, and show the youth what they can accomplish with hard work and dedication, I had to hold the tears back,” General said.
General said that one of the youth, Jon Trudeau, turned to his mother when they were checking out the field, and told her “this is where I’m going to be playing in 10 years.”
The New York Giants defeated the Detroit Lions 23-20 in overtime.
Trudeau, who is 14 years old and a member of Wikwemikong, said that being able to go to the NFL game was amazing.
“The excitement of it, everything, and for those who are football players, (going to the game) makes them more determined to keep doing what they do,” Trudeau said. “Being able to watch my favourite team was awesome even though they lost. I can still say I’ve been to a game.”
Marek McLeod, who is 10 years old and a member of Thessalon First Nation, was happy to be able to attend the game.
“I finally found a sport that my size helps me with,” McLeod said. “I was so happy to be able to go to this football game. It was a super long trip, (we left at 5 am and got back at 5:30 am the next day), but it was worth it!”
General said that the CCAY would continue to encourage the youth in their community to set and reach their goals.
“The youth were asking what our next trip was going to be, personally they want to see a NBA game,” General said.