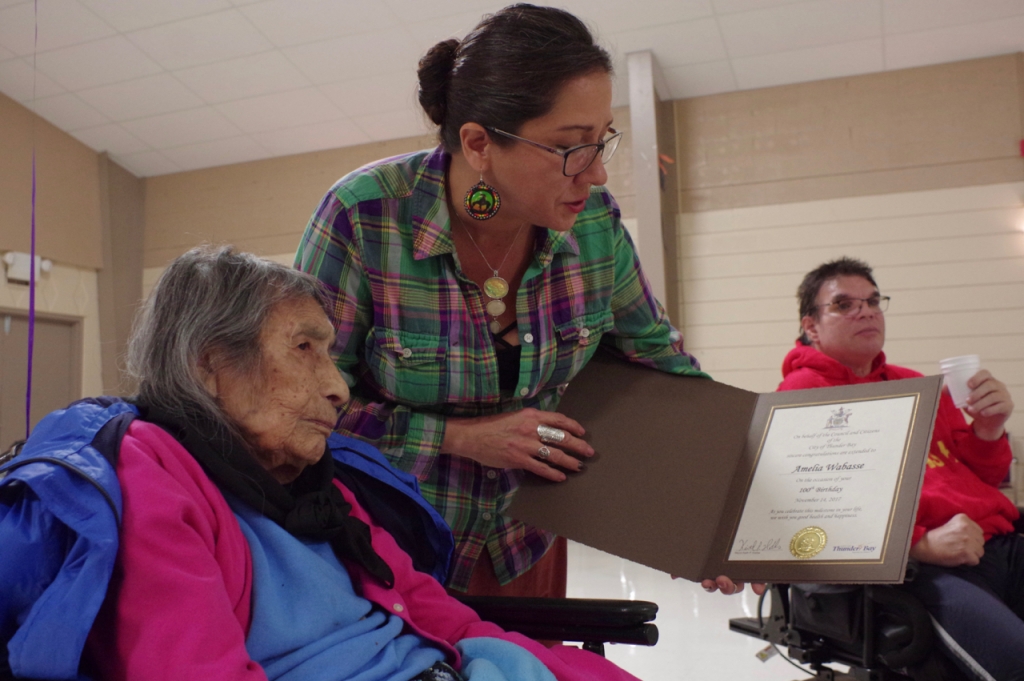 Nibinamik Elder Amelia Wabasse was recognized by the City of Thunder Bay on Nov. 17 for the occasion of her 100th birthday during Anishnawbe Mushkiki’s Fall Feast at the Ka-Na-Chi-Hih Specialized Solvent Abuse Treatment Centre in Thunder Bay. Photo by: Rick Garrick.

“She’s just happy that she is here with the group,” says Wabasse’s translator. “She was talking about at a very young age that she had seen this way of life, the traditional way of life. She was brought up that way by her late father. One time she was very sick … and her father treated her with this traditional medicine.”

Wabasse’s family lived on the land, travelling to Eabametoong and Lansdowne House in the summer by canoe. Wabasse married John Agash in 1941, but he passed away in 1942. They had a son Cornelius, who passed away in 1950.

“All her life she ate mostly traditional food,” the translator says. “She never had anything like she had now, like sweet stuff. It was all traditional food — she is not a diabetic either. Natural sweets were like berries.”

Teresa Trudeau, traditional healing coordinator with Anishnawbe Mushkiki, met Wabasse while working with the seniors at Lakehead Manor in Thunder Bay. Wabasse has been living at Lakehead Manor since August 14.

“It’s really great to have Amelia here today,” Trudeau says. “It’s really an honour to have her as part of our ceremony because it is a celebration of life, the feasting ceremonies we have four times a year. I know it is snowing outside, but this one is a celebration about the fall season. The leaves have all fallen, so that is when we know. In the spring, how we know is when the little buds are on the trees.”

Aaron Therriault, who conducted the Fall Feast ceremony, says it was “very fascinating” to have Wabasse at the ceremony.

“It was very empowering for somebody to reaffirm our culture and our ceremonies from that era,” Therriault says. “And seeing how this is how she remembered it as a little girl. This is how her dad did these ceremonies, exactly as our Elders passed it on to us. It feels good for somebody to come here that old and to be able to speak to our people here.”

Therriault appreciated the opportunity to sing for Wabasse.

“I’m really happy that she’s here,” Therriault says. “I’m really happy to be sitting here and feasting and eating with her and singing for her and sharing my drum with her and my language and my knowledge. I’m really blessed.”
Caroline Cameron-Fikis, recreation manager at Lakehead Manor, says the Fall Feast was an opportunity for Wabasse to connect with relatives and people from Nibinamik.

“It’s just to make that connection again for people — I think it’s fantastic,” Cameron-Fikis says. “I talked with Teresa from Mushkiki and I said could we bring her to this feast so she could be honoured and acknowledged by her people.”

Wabasse also celebrated her birthday with family and friends on Nov. 14 at Lakehead Manor.

NHL Radio Contest, Week 6 Word of the Week: soo ke in ne mo we win (Oji-Cree) OR Sokkitehewin (Cree). Visit http://www.wawataynews.ca/nhlradiocontest for details on how you can win a trip to Toronto to see the Leafs play the Oilers on December 10!