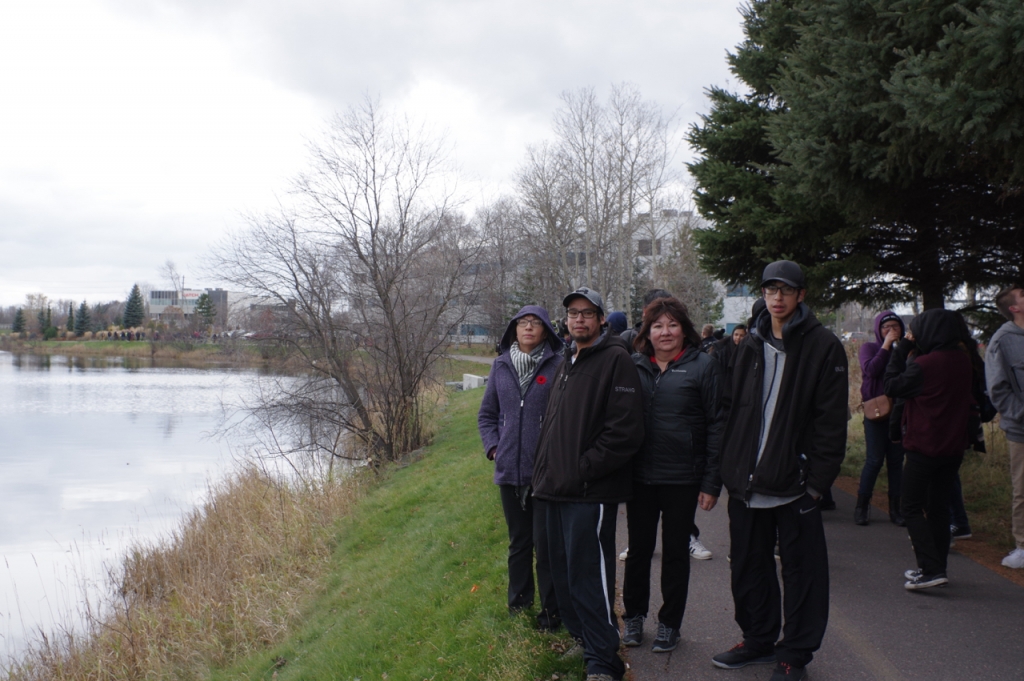 The lead group of A Day to Remember walkers wait for the rest of the walkers to catch up along the McIntyre River during the Nov. 1 walk for the seven Nishnawbe Aski Nation high school students who died in Thunder Bay from 2000-2011. Photo by Rick Garrick.

Reggie Bushie’s brother walked into the cold McIntyre River during the Nov. 1 A Day to Remember walk for the seven Nishnawbe Aski Nation high school students who died in Thunder Bay from 2000-2011.

“It was just one of those moments where it just hits you,” says Grand Chief Alvin Fiddler about Ricki Strang’s walk into the water. “It sure had an impact on those of us who witnessed that. It just shows that he still carries a heavy load and that’s something that we hope, through the ceremony today, that we can begin to address the grief and the loss that we all have.”

Strang organized the walk along with Tanya Talaga, who wrote her book, Seven Fallen Feathers: Racism, Death, and Hard Truths in a Northern City, about the deaths of the seven students.

“It’s to spread awareness to other young folks so this doesn’t have to happen ever again,” Strang says about the walk. “And we want to be heard too. With no answers (about the deaths), what’s up with that.”

Strang, from Poplar Hill, says he and his family had a “tough” time at first after Bushie died in 2007 in the McIntyre River.

Strang recalls waking up in the river the night his brother went missing in 2007.

“It was close to where my brother was,” Strang says. “I remember looking for him when I woke up.”

“It was Reggie’s family that was the first family that called for an inquest,” Fiddler says. “They wanted to know more about why their son died, how he died and most importantly they were looking for a way to prevent similar deaths in the future. And that’s when the struggle for an inquest began — it took a long time and we had to lose more students unfortunately before the province agreed to have an inquest, not just on Reggie’s life and death, but all the other students we have lost. So I commend the Bushie family for their courage to stand up and demand answers for their son.”

The walk was held from Dennis Franklin Cromarty First Nations High School to the location on the north shore of the McIntyre River just east of May St. where Bushie’s body was found.

“It was a very emotional day for me to walk with Ricki,” says Norma Kejick, executive director of Northern Nishnawbe Education Council. “Ten years ago I was walking the river with Ricki when we were looking for his brother Reggie. I stayed in Thunder Bay until his brother was found and I’ve always had a spot in my heart for Ricki and his family.”

Kejick also shared how happy she was when a group of DFC students completed the mural Bushie had started painting before he died, at the end of the Seven Youth Inquest.

“To have that mural displayed here in the school is something that we will never forget,” Kejick says. “Ricki did try to finish that mural, but he couldn’t so we left the outline. So I was very happy to walk with Ricki and his brother Everett today. I really thank Ricki for taking the lead as this memorial walk was what he wanted to do.”

Marten Falls Elder Sam Achneepineskum led the ceremony for the walkers at the McIntyre River before they headed back to DFC for a feast.

“It was to show some respect for the family, to remember the family and all the other families that have been affected by this,” says Deputy Grand Chief Derek Fox. “And in some ways to bring unity to our community — we saw some city leaders, government leaders, First Nation leaders and the kids all walking together. But the number one thing is to just show some respect and to honour and remember those whose lives were lost.”

Julian Falconer, legal counsel for NAN, says the deaths of the seven high school students was “deeply devastating” to their families and communities.

“For those of us who have worked, as I have, with Nishnawbe Aski Nation on this case for years, a piece of you is stuck with these kids and stuck with these issues,” Falconer says. “So today’s march was one way of paying tribute and respect for a very difficult set of losses.”

“One of the times I interviewed him (for the book), he mentioned to me that on Nov. 1 he wanted to have a special anniversary because it has been 10 years since his brother died,” Talaga says. “I was having coffee with him and Alvin, so that is how this came to be. He suggested we have a memorial by the river, and I said well that is way better than doing any book launch, so that’s we what we did. And then Alvin and I said: ‘Let’s do a feast too,’ and so here we are.”

NHL Radio Contest: Week 4 Word of the Week, saa ki i we win (Oji-Cree) or Sakihiwewin (Cree). Visit the contest page at www.wawataynews.ca/nhlradiocontest for contest rules!