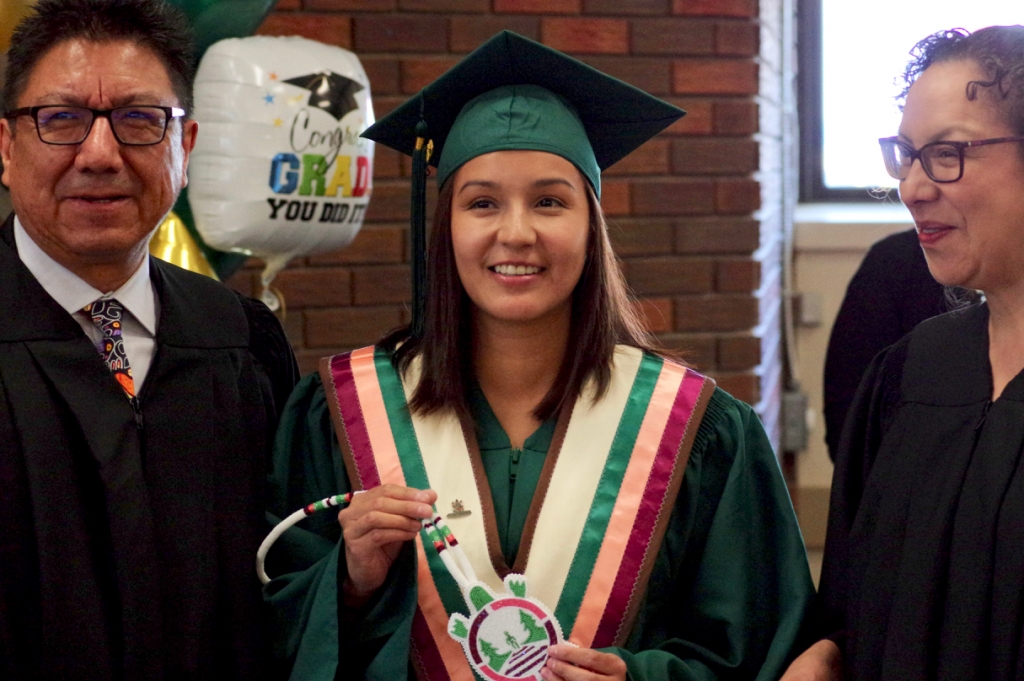 Tina Strong, an Early Childhood Education graduate, was presented with the Governing Council Award of Excellence for her 4.0 GPA in the ECE program at Oshki-Pimache-O-Win The Wenjack Education Institute’s 2019 Graduation Ceremony on June 6 at the DaVinci Centre in Thunder Bay.

Oshki-Pimache-O-Win The Wenjack Education Institute celebrated the achievements of 63 graduates during the 2019 Graduation Ceremony on June 6 at the DaVinci Centre in Thunder Bay.

“I just want to on behalf of Nishnawbe Aski Nation express my congratulations to all the graduates here — it’s a beautiful sight to see when you walked into the room,” says Grand Chief Alvin Fiddler. “I understand this is the largest graduation class ever for Oshki Wenjack, so I applaud Oshki Wenjack, the staff, the instructors, the board and everyone that contributed to the success of the students that worked so hard to get here today.”

Eabametoong Chief Elizabeth Atlookan stressed the importance of the support that family members provided to the graduates during her keynote address at the graduation ceremony.

“You have been the biggest support, so I just want to commend that,” Atlookan says. “The time (the students) are away from home, it takes a lot right at the home base. So thank you very much, because support is everything in achieving one’s dream.”

Atlookan says graduations are one of the highest forms of recognizing personal achievement.

“I felt that when I graduated, sitting there where you are today,” Atlookan says. “It was such a feeling of accomplishment. I know there are a lot of things that happened towards making that happen, so this ceremony is a confirmation of your success.”

“We are on the rise,” Atlookan says. “Give yourself a clap for that.”

“Our time here has been quite a journey,” Arpin says. “Each of us has our own story about struggles and successes, and thankfully each story has culminated here today at this moment.”

“The group of us that are graduating from the Advanced Chemical Addictions Worker program, we are 50-plus or in our early 60s,” Quisses says. “Education is very important to many of us, no matter how old we are. It does take commitment and patience.”

Quisses says the graduates helped and supported each other during the program.

Tina Strong, a Dalles citizen and Early Childhood Education (ECE) graduate, was presented with the Governing Council Award of Excellence for her 4.0 GPA in the ECE program.

“I’m very surprised and shocked and happy,” Strong says. “My future goals are I want to go to university after this. I really enjoyed (the ECE) program, I enjoyed everyone I met, my classmates and the little ones I met throughout my placement.”

Gary Bruyere, acting executive director and director of finance with Oshki Wenjack, says the graduates “did great” during their programs.

“The students survived many challenges that they encountered especially at the beginning,” Bruyere says. “As the year went on, they got louder and louder as they became more friendly. It was great to see, especially for some of them who thought they wouldn’t be able to make it but did. So that is fantastic to see.”