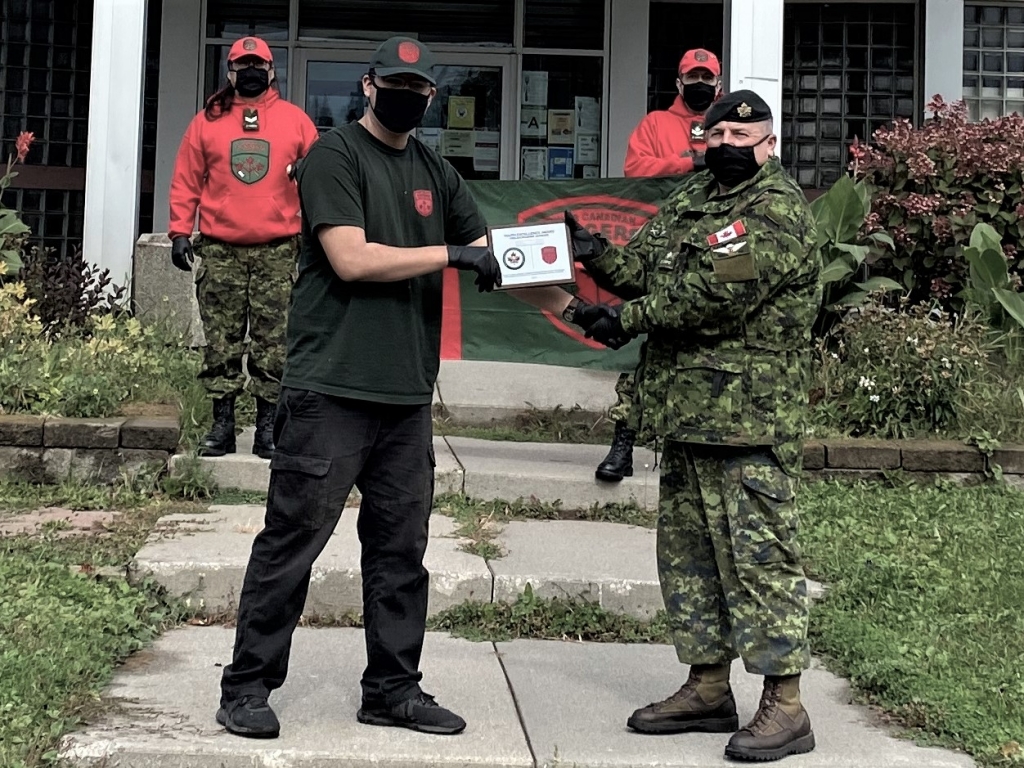 Two Junior Canadian Rangers from Northern Ontario are among 10 Junior Rangers from across the Canadian North who have won Canada Company bursaries to assist with their education. Both received a plaque recognizing their leadership and citizenship and a cheque for $1,000 to further their educations. Junior Canadian Ranger Michael Baxter, left, receives a cheque for $1,000 to further his education and a plaque from 2nd Lieutenant Jack Teskey of the Canadian Army.

Two Junior Canadian Rangers from Northern Ontario are among 10 Junior Rangers from across the Canadian North who have won Canada Company bursaries to assist with their education.

Both received a plaque recognizing their leadership and citizenship and a cheque for $1,000 to further their educations.

Canada Company is a Toronto-based charity that provides a range of supports for the military. The Junior Canadian Rangers is a Canadian Army leadership program for boys and girls aged 12 to 18 in remote and isolated communities across the Canadian North. There are about 750 Junior Rangers in 24 remote and solated First Nations across the Far North of Ontario.

Michael Baxter, 19, of Eabametoong First Nation, a recent graduate of Westgate Collegiate and Vocational Institute in Thunder Bay, is studying at Confederation College in Thunder Bay to become an aviation maintenance technician. “I’m going to use some of my cheque to buy tools for my college work,” he said. “It’s going to be a great help. Getting it was a nice surprise.”

Daniel Bottle, 18, of Lac Seul First Nation, a graduate of Sioux North High School in Sioux Lookout, is going to use his bursary to study to become a conservation officer. “I’m going to hang the plaque on the wall and I’m going to save the money for college,” he said.

“Daniel’s awesome,” said Master Corporal Lori Kendall, the Canadian Ranger who runs the Junior Ranger program in Lac Seul. “He really helps with the weekly training. He has been an outstanding role model for the younger kids. He has lots of patience with them and they look up to him. If I need help he’s the first to be there asking how can he help me.”

In 2019 he was named the province’s top Junior Ranger.

“Michael Baxter is a natural leader,” said 2nd Lieutenant Jack Teskey, the Canadian Army officer who runs the Junior Ranger program based at Thunder Bay’s Dennis Franklin Cromarty High School. “He has an excellent personality and he has a calming effect amongst the younger Junior Rangers. He’s an excellent shot and he’s always showing the younger kids how to shoot.”

Both award winners are aging out of the Junior Ranger program and are in the process of becoming Canadian Rangers, who are part-time army reservists.