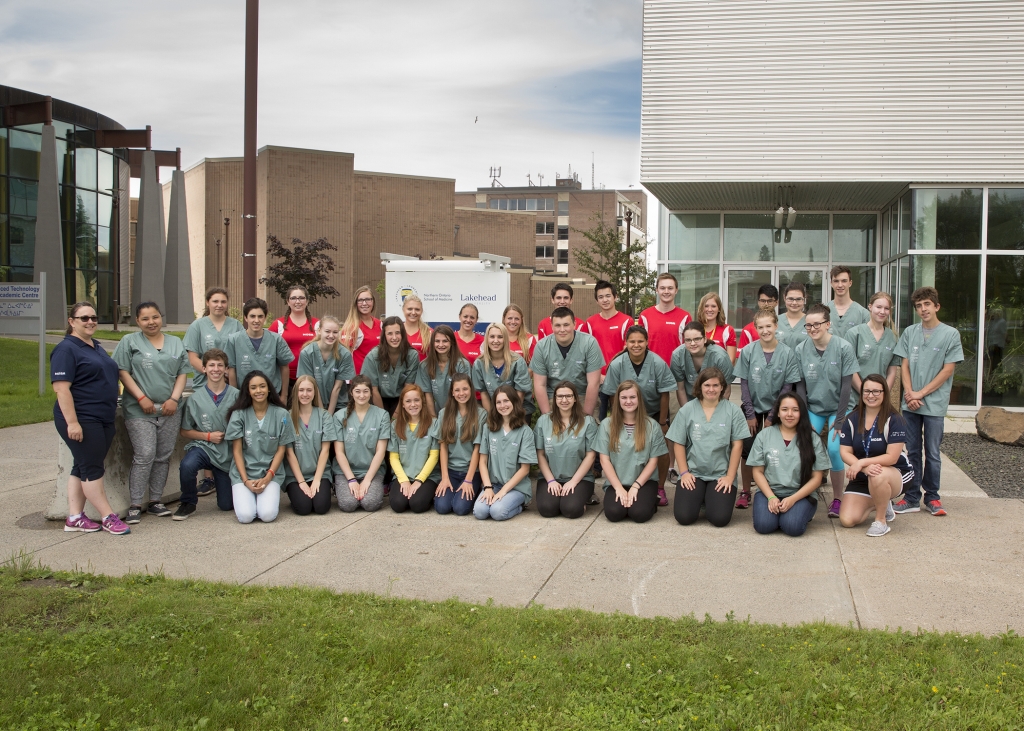 Kitchenuhmaykoosib Inninuwug’s Elyssia Nanokeesic and a group of about 28 students from across northern Ontario and Nunavut participated in the Northern Ontario School of Medicine West Campus Health Sciences Summer Camp at Lakehead University in Thunder Bay. Submitted photo.

“The most interesting one was doing the CSI,” says the Grade 11 student. “I’m interested in that branch (of medicine) too, the forensics.”

The CSI activity took place throughout the week with the murder scene set on Monday and the camp participants gathering evidence for the rest of the week.

“Students have to discover who the murderer was for the victim through hair analysis, fibre analysis, fingerprints,” says Véronique Poirier, coordinator of the Health Sciences Summer Camp and admissions and learner recruitment officer with NOSM. “They even do an interrogation room with the suspects. They have four suspects when they started the week and they narrow it down as the week goes on to see who was the one responsible for the murder.”

Nanokeesic had already been considering the pursuit of a medical career before she attended the Health Sciences Summer Camp at Lakehead University in Thunder Bay.

“I was thinking of studying to become a surgeon,” Naokeesic says. “I don’t know which one yet though.”

Nanokeesic says she wants to help Aboriginal people with their health care.

“I just want to try to find out whatever is wrong with the patients,” Nanokeesic says. “Mostly the reason why is because I have actually lost my aunt and uncle through sickness.”

Nanokeesic enjoyed learning how to suture and make casts with the other participants during the Health Sciences Summer Camp.

“The funnest (activity) was suturing, learning how to stitch up wounds,” Nanokeesic says. “That was pretty fun. We had to do different kinds of wounds, like big wounds and small wounds.”

Nanokeesic was one of about 28 youth, ranging from 14 to 16 years old, who participated in the NOSM West Campus Health Sciences Summer Camp. NOSM also held an East Campus Health Sciences Summer Camp from July 4-8 for about 35 youth at Laurentian University in Sudbury. A wide range of students from across northern Ontario as well as two students from Nunavut attended the two camps.

“It’s a good way for me to get familiar with the campus and see what other opportunities there are for me,” Nanokeesic says.

“The students are having a lot of fun,” Poirier says. “They have to apply to attend camp, so there is a selection process. So of course they want to be here, they have applied to be here, so they are having quite a lot of fun. It’s been very positive.”

Nanokeesic found the experience at Lakehead University to be “very different” from back home in KI.

“It’s kind of too busy,” Nanokeesic says. “I guess I’m just used to being isolated, being out on the land instead of (being) in traffic.”

One of Nanokeesic’s fellow KI citizens, Daniel Cutfeet, studied in the first class at NOSM and is now a general physician at the Namgis Health Centre in northern B.C.