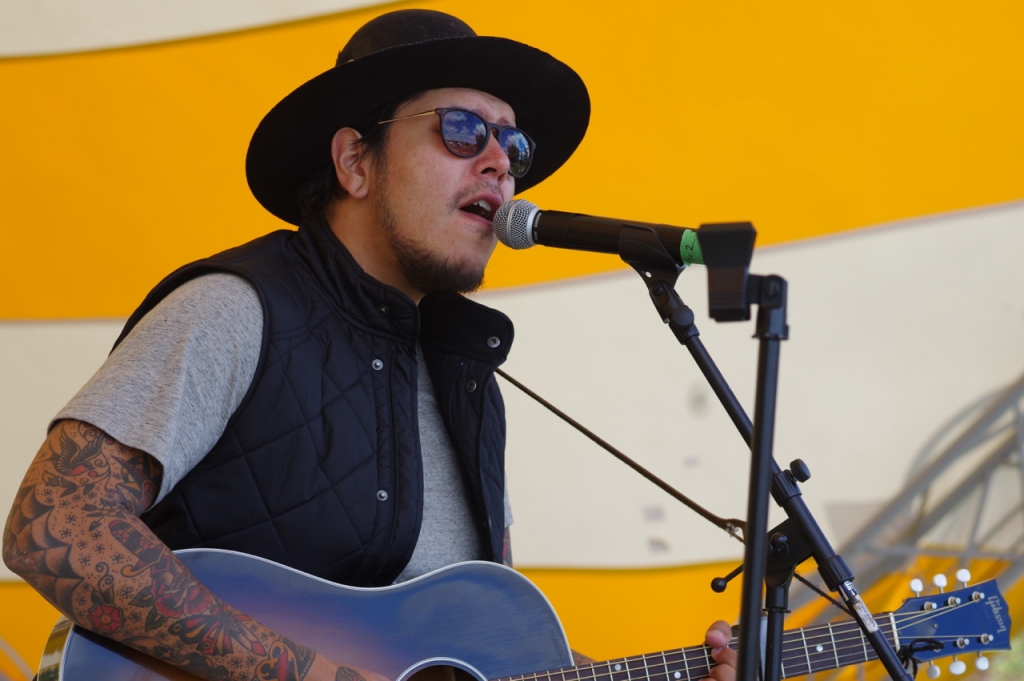 Musician Nick Sherman performed many of his songs during the 3rd Annual Maadaadizi Orientation for Aboriginal post-secondary students, held Sept. 10 in Thunder Bay.

The Revenant’s Grace Dove spoke about her career as an actor during the 3rd Annual Maadaadizi Orientation for Aboriginal post-secondary students, held Sept. 10 in Thunder Bay.

“This week has been like many others — I work to build routine and discipline into the hurdles of an artist’s lifestyle,” says Dove, a Shuswap from the Canim Lake Indian Band in B.C. who performed as Leonardo DiCaprio’s wife during The Revenant film in 2015. “During these dry spells I can go a number of weeks without an audition, which sometimes makes me feel like I am standing still. That’s when I have to remind myself of the many reasons I have to be grateful today and trust that the next opportunity is right around the corner.”

Dove, who lives in Vancouver, recently received an audition call after “an extremely quiet August.”

“(It was) an audition that sent chills up my spine and made my heart want to burst,” Dove says. “Obviously I can’t quite share details, but I want to describe the feeling I get in my soul when a script feels right. Images, emotions and characters started dancing off the page, and that moment, just sitting on the plane yesterday, reminded me why I have to say yes to my dreams every single day and believe the future can be brighter than I have ever imagined.”

Local musician Nick Sherman and Elvis impersonator Bobby Narcisse were also featured during the orientation, which was held at Marina Park with a variety of information booths from local organizations, an artisan’s market and children’s activities. Free pizza was served to the students and prizes were drawn for students during the orientation.

“It’s another great year,” says Rosie Mosquito, Oshki’s executive director. “It’s always really nice to see our people, young and old, deciding to take new paths through education to improve their lives for their family and their communities.”

Mosquito earned her degree in political science at York University in Toronto.

“That was a culture shock, but I stuck it out,” Mosquito says. “It was tough but exciting, and worth it, worth it all.”

“For our students from Aboriginal communities, it’s to bring them together, to welcome them to Thunder Bay and to show them what kind of services and supports are available here in Thunder Bay,” says Rita Winter Duncan, student support worker at Oshki and co-chair of the Maadaadizi committee. “The turnout is pretty good and the weather turned out great. Welcome to all students who are here, returning, new students. This event is for you and I hope you enjoyed it and best of luck in the school year.”

Brian Stevenson, president and and vice-chancellor of Lakehead University, says it is great to have all the education institutes in Thunder Bay at the orientation.

“For us at Lakehead University, we are fully committed to having more Aboriginal students,” Stevenson says. “There is this huge group of young kids who are going to go to post-secondary education in the next few years — we want to make sure we are friendly for them, that they see the university as theirs, so that they own it and that they come when they are ready.”

Stevenson says the path through university is at least four years long.

“Throughout that journey, the university is there as a community to support them for them to succeed going forward,” Stevenson says. “And we want them to engage with the community and to give back to their own community.”