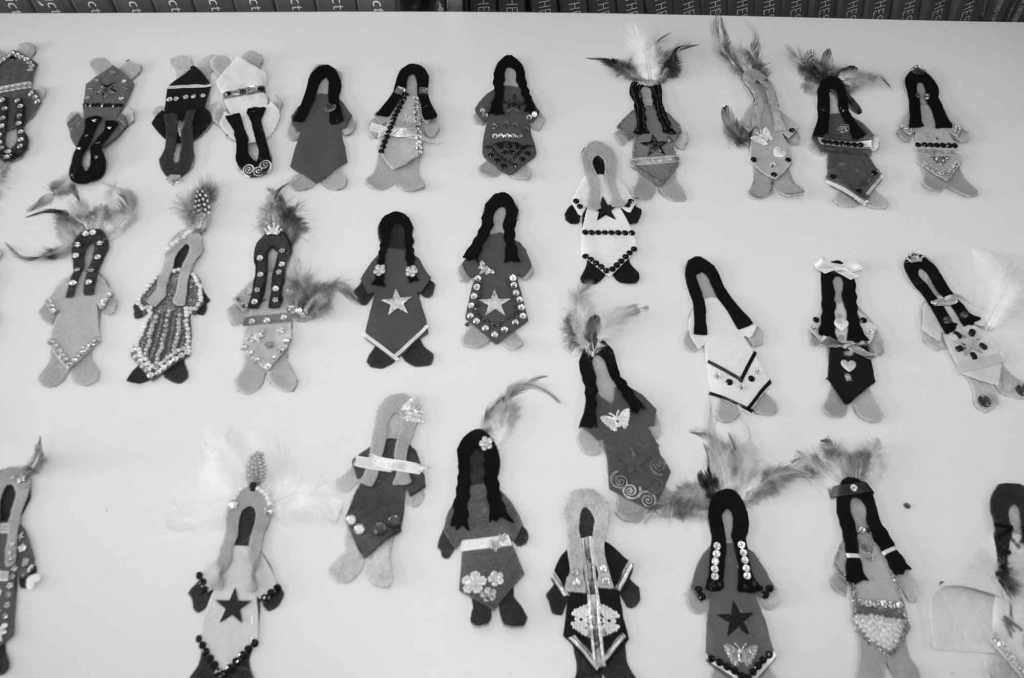 The issue of missing and murdered Aboriginal women was recently shared with students in Thunder Bay through Lakehead University’s local faceless dolls project.
“I think it’s sad, mainly, that no one is paying attention to these people who have gone missing,” said Rachel Corston, a Grade 8 Algonquin Avenue Public School student. “It’s nice that they’re recognizing them now and that we’re doing all these dolls.”
Corston and her fellow students created unique faceless dolls during a March 26 faceless dolls project session at her school.
“It’s actually pretty neat — we get to make these dolls, the people representing them,” Corston said. “I focused mostly on the trim of the dress, you know the glitter glue and ribbons.”
Helen Pelletier, director of the Lakehead University Aboriginal Awareness Centre, and Charmaine Romaniuk, the vice-president student issues at Lakehead University Student Union who created the local faceless dolls project at Lakehead University after hearing about the Native Women’s Association of Canada’s Faceless Dolls Project, brought the local faceless dolls project to two Thunder Bay schools, Ecole Gron Morgan and Algonquin Avenue Public School.
“Overall, it’s been very successful,” Pelletier said. “This is the second school we’ve been to. We went to Ecole Gron Morgan and there were over 200 dolls made there. And at the university as well, we’ve had over 100 made.”
Pelletier estimates there will be about 500 dolls created once the faceless dolls project sessions are completed at Algonquin Avenue Public School.
“And there are other schools interested, so if we actually kept going to every school, we would probably have more than enough dolls to represent the (murdered and missing) women,” Pelletier said. “It’s kind of comparable to the Walking With Our Sisters uncompleted moccasin vamps. When that project started, Christi Belcourt only asked for 500 or 600 moccasin vamps, but when all was said and done she had over 1,800.”
Belcourt’s project involved the creation of 600-plus beaded moccasin vamps by hundreds of people that were to be combined into one large collaborative art piece for installation in a winding path on cloth on the gallery floor in various galleries and sites across Canada.
Pelletier said about 13 classes participated in the faceless dolls project at both schools through the cooperation of Corine Bannon, Native language teacher at Ecole Gron Morgan and Algonquin Avenue Elementary School.
“This project, for me, is empowering for our students to recognize the importance of culture and how important the girls are,” Bannon said. “Traditionally, women are the life givers, so when a woman is missing, that is one less person that is giving life. And in a First Nations community, women are valued because of our traditions.”
Bannon said she received a mixed reaction from the students about the high numbers of missing and murdered Aboriginal women. The Native Women’s Association of Canada’s Faceless Dolls Project involved the creation of 582 dolls to represent the 582 known cases of missing and murdered Aboriginal women and girls.
“Some were not aware of the statistics, some are very shocked,” Bannon said.
“After they do the dolls, they feel very empowered. They feel they are contributing and recognizing the First Nations women and girls who are missing.”
Algonquin Avenue Public School Grade 8 student Kyra Maki said the project was “very interesting.”
“You get to show your hope for all the women and girls who went missing,” Maki said. “I thought it was sad that no one was even looking for the people because if it was like a Caucasian person, it would be all over the news and everyone would be looking for them. But since it’s not, no one seems to care.”