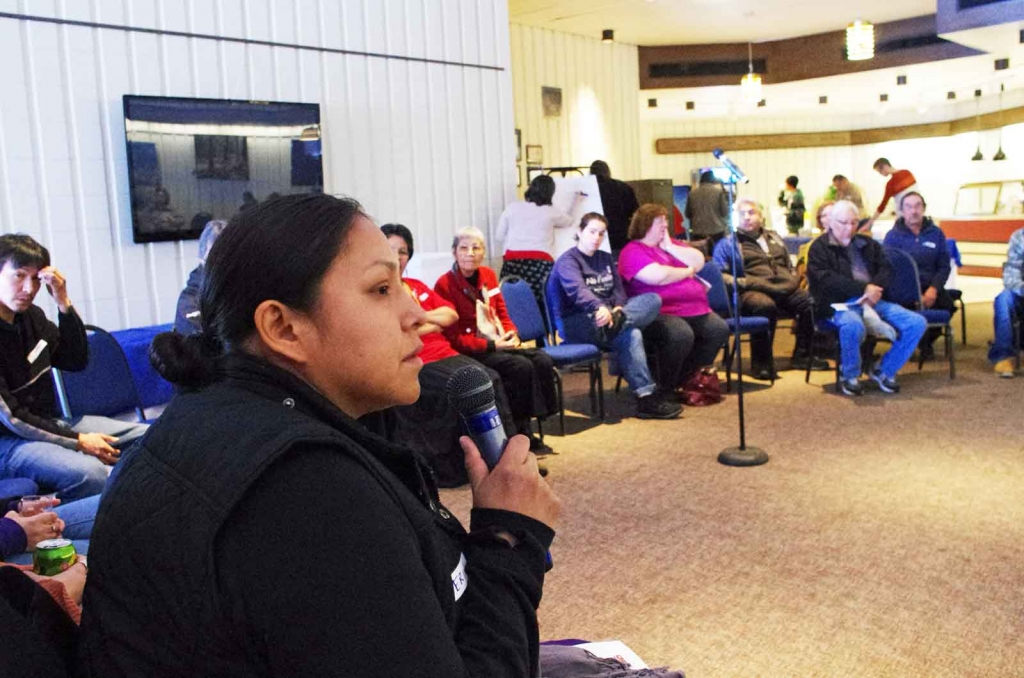 Mishkeegogamang’s Erin Bottle called for Elders to share more traditional knowledge with youth during a Lakehead University Elders and Youth Round Table.
“When I hear our people talk about what we lost, what we don’t have, (and) what we need, what we need to change is the language that we use if we are to empower our young people,” Bottle said during the March 19 gathering in Thunder Bay. “I understand the Anishinabeg is not given everything all at once. It is impossible for somebody to know everything — that is why we need each other, every piece of knowledge. Each and every single one of you were given a piece (of knowledge); bring those pieces together.”
Bottle encouraged people to gather together during the winter, noting winter is the sacred time for the Elders to share their knowledge.
“You have knowledge that we young people need,” Bottle said. “We need you; we need your knowledge.”
Bottle said it doesn’t “cost anything” for people to gather together.
“It doesn’t cost anything to go see an Elder, to help them out, to go clean their house, wash their dishes,” Bottle said. “Spending time with them — they love it.”
Bottle also encouraged the Elders to approach youth with tobacco instead of waiting for youth to approach them.
“It is not only young people’s responsibility to take tobacco to an Elder,” Bottle said. “It is also the responsibility of an Elder to take tobacco to young people if they have knowledge and they see somebody strong to carry it.”
Bottle recently received tobacco from an Elder.
“I felt so loved by them,” Bottle said. “They wanted to come and give me tobacco to share with me. I gave them time to talk to me. What I received was ancient knowledge of the clans. Sixteen songs were given to me during that Ogichidaa fire.”
Bottle also called for those who have lost their language to strive to reclaim it.
“It is up to you to feed that fire inside to retrieve your language,” Bottle said. “To use both eyes to see when someone is talking.”
The Elders and Youth Round Table was hosted by Lakehead University’s Office of Aboriginal Initiatives in conjunction with Aboriginal Cultural and Support Services. Topics included: relationship building, cultural programming, culture in institutions, meaningful teachings, language programming and knowledge transfer.
Metis Senator Bob Mckay suggested the development of an Elders handbook, similar to the Elders Handbook produced by the Northern Ontario School of Medicine, to fill the gap between youth and Elders.
“All the information is in that handbook for the people who want to talk with an Elder,” McKay said. “It is very important and I would like to see the university to come up and produce an Elders handbook.”
Sagkeeng Elder Freda McDonald said Anishinabemowin is important for connecting people together because it comes from the heart.
“The language was given to us as a heritage and it is the root of our people,” said the member of the Spirit Wheel Singers. “It is very important for all of us Anishinabe to learn the language. I have lost a lot of the language myself, but I keep studying it and try to learn more and more.”
Pic River Elder Beatrice Twance-Hynes said she feels a “sense of peace” whenever somebody offers her tobacco.
“I feel like I know what I have to do,” said Twance-Hynes, who is also a member of the Spirit Wheel Singers. “Sometimes the answer doesn’t always come. When you go to talk with an Elder, the Elder may not have the answer right away to what you are asking. The Elder may have to go back to reflect and pray on what needs to be shared.”
Pic River Elder Raphael Moses encouraged others to share their traditional knowledge.
“I spent many years travelling — I doctored many people in Ontario, Manitoba and Quebec in the last 34 years,” Moses said, noting he recently published a book on traditional medicines after seeing many of his friends passing on across the north without sharing their knowledge.
“It’s hard to find young ones to follow; I’ve been asking young people to come sit with me and I will teach you what I know, but it is very hard.”