Diverse careers ahead for KKETS grads 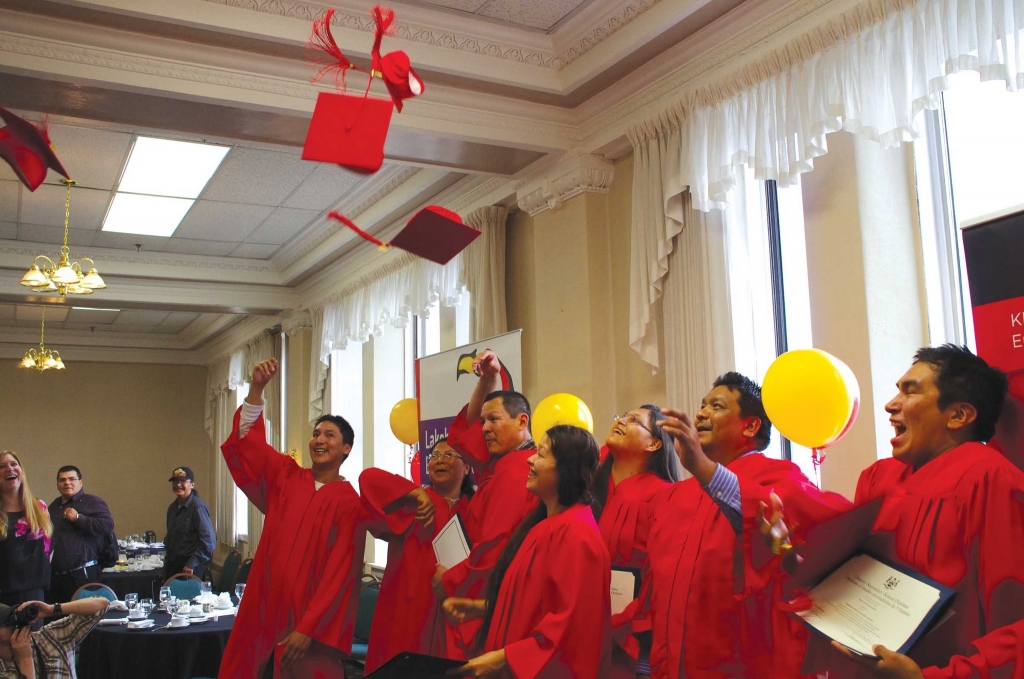 Eabametoong’s Ricky Yellowhead is looking at a career in the Ring of Fire after graduating from KKETS’ Aboriginal Skills Advancement Pilot Program (ASAPP) with a GED.
“I applied for forest management and environmental technician (at college this fall),” Yellowhead said during Kiikenomaga Kikenjigewen Employment and Training Services’ June 28 graduation ceremony at the Prince Arthur Hotel in Thunder Bay. “With the mine that’s going to be opening up, I know there’s going to be a lot of opportunities and I want to be a front-line worker. I just want to work in the mines. I like working in the outdoors.”
Yellowhead and about 28 other adult learners graduated from ASAPP with GEDs (General Education Development Diplomas), Ontario Secondary School Diplomas (OSSD) or a variety of certificates.
“The KKETS’ ASAPP program has been set up to help our community members get the skills and training they need to improve their lives in the new economy that is emerging due to resource development,” said David Paul Achneepineskum, CEO of Matawa First Nation Management. “I believe the KKETS approach is going to help hundreds, possibly thousands, of First Nation members achieve a better life for themselves, their families and their communities.”
Aroland’s Holly Mendowegan plans to study natural resource management at both college and university levels after graduating with an OSSD.
“I like the outdoors and I like my land,” Mendowegan said. “I want to learn as much as I can ... and take my knowledge back to my reserve.”
Mendowegan enjoyed the learning environment at KKETS.
“All of us came from reserves and we had to adapt to living in the city,” Mandowegan said. “It took a couple of months to get used to it and then after that we started working hard on our school work and helping each other.”
Aroland Chief Sonny Gagnon said ASAPP is changing the lives of Matawa community members.
“Our community members want to improve their lives,” Gagnon said. “They want to share in the benefits and opportunities that will come from development of the Ring of Fire, and First Nation traditional territories. We are proud of our members who are graduating today.”
Funded by the provincial government, ASAPP’s primary objective is aimed at developing an educated and highly skilled workforce in the north.
“The Aboriginal Skills Advancement Pilot Program is a wonderful example of our government’s support and collaboration with Aboriginal peoples to help students obtain the skills needed to support economic development across northern Ontario,” said Michael Gravelle, minister of Northern Development and Mines. “Ensuring all Ontarians get the education and training they need to succeed in the global economy is critical to our province’s future, and I wish to congratulate all of these graduates as they embark on the next stage of their journey.”
Marten Falls’ Shawn Baxter plans to study electronic engineering at Confederation College this fall after graduating with an OSSD.
“I have some interesting ideas I’d like to do with engineering, especially electronic engineering with computers,” Baxter said.
Baxter is also considering a university education in the future with a long-term goal of studying law.
“Ensuring our Matawa First Nation members have the education, training and skills to fully participate in today’s economy and labour market is integral to KKETS mission — to provide culturally appropriate opportunities for education, training and employment by providing professional advisory support services, relevant systems and programs to empower individuals to take initiative for change in their own lives,” said Elsie MacDonald, KKETS board member president. “The graduating students will now be ready for whatever comes their way whether it’s post-secondary, training and employment.”
Eabametoong’s Gwendolyn Boyce plans to pursue a career in policing after graduating with an OSSD.
“I’m going to college and hoping to get into police foundations,” Boyce said, noting she has relatives working with Nishnawbe Aski Police Service. “I’ve been having that passion for a while now.”
Neskantaga’s Neal Ostamus plans to study arts and fundamentals at college after graduating with an OSSD.
“I do a lot of drawing, sketching (in) black and white,” Ostamus said. “I don’t really work with colours a lot.”
Constance Lake’s Patricia Moore and Webequie’s Glen Wabasse also graduated from with OSSDs while Neskantaga’s Leon Moonias, Eabametoong’s Viola Stevens and Aroland’s Keith Towedo graduated with GEDs.
Nibinamik’s Gershom Beaver, Aroland’s Krista Bouchard, Ginoogaming’s Marianne Echum and Webequie’s Jessie Mekanak, Beverly Moonias and Sandra Spence graduated with Certificates of Academic Completion.
Constance Lake’s Adnan Chum graduated with a Certificate of Accomplishment Construction Craft Worker Level 1 while Aroland’s John Towedo and Ginoogaming’s George Echum and Patrick Spence graduated from the Operating Engineers Training Institute of Ontario.
Marten Falls’ Samuel Achneepineskum, Nibinamik’s Elijah Sugarhead, Eabametoong’s Rudy Waboose, Webequie’s Howard Jacob and Richard Jacob, Neskantaga’s Darren Sakane and Tracey Wapoose, and Aroland’s Leo Gagnon, Chad Kashkish, Ross Kashkish, Ginette Magiskan and Derek Meshake graduated with Certificate of Accomplishments (GED).
Yellowhead encouraged others to consider studying at KKETS.
“It was really good — they support you in every way,” Yellowhead said. “You’re going to love it. They take care of you.”