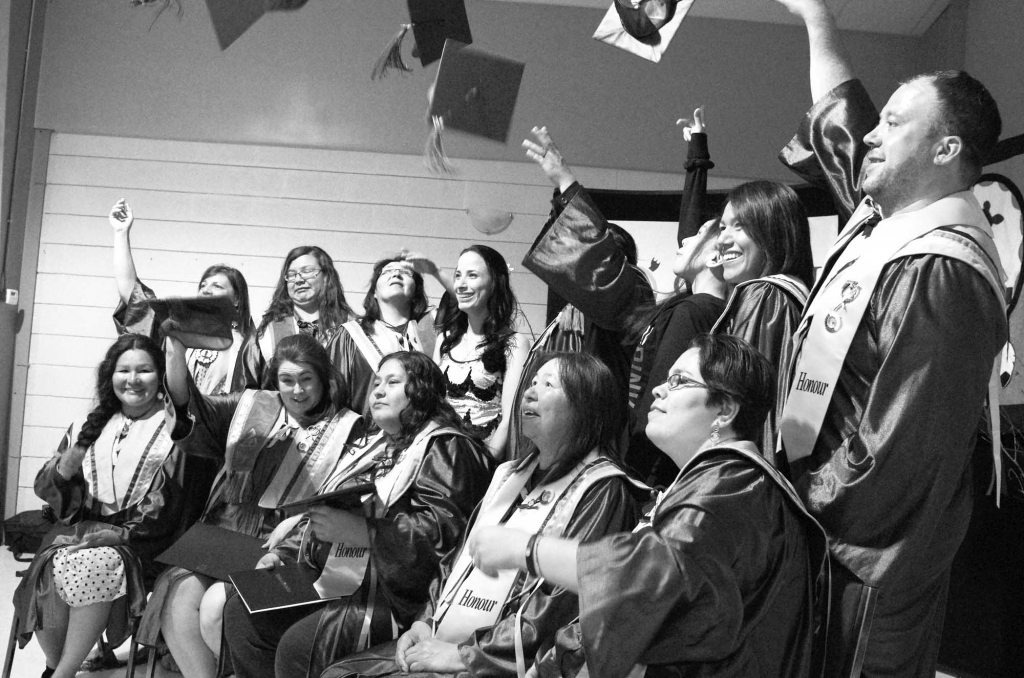 Michelle Harel’s hard work in Oshki-Pimache-O-Win’s Social Services Worker — Native Specialization program has paid off with a 3.98 GPA, Oshki’s Governing Council Medal and a job in her chosen field.
“I just got a position on May 21 as a child protection worker in child welfare,” said Harel, originally from Caramat, located about 262 kilometres northeast of Thunder Bay. “That’s what I was working towards because of my maturity, I feel I am able to work with the families.”
Harel waited until her children were older before she went back to school at Oshki-Pimache-O-Win Education and Training Institute. She graduated at age 48.
“It was five semesters, so we went through the summers,” Harel said. “But it is worth it; it is an achievement.”
Harel said the program included two hours of evening e-classes from Monday to Thursday of every week as well as homework assignments and essays.
“It was intense, but it was doable,” Harel said. “I don’t want to say that going back to school is easy, but Oshki made it easy to achieve it. It is doable, you just have to hang in there.”
Harel was one of 17 graduates who were celebrated for their achievements during Oshki’s graduation ceremony, held June 14 at the Ka-Na-Chi-Hih Specialized Solvent Abuse Treatment Centre in Thunder Bay.
Naomi Chikane, Sheri Desmoulin, Rhonda Goodman, Lesley Mathe, Greg Moe, Ryan Sakakeep and Themainia (Amy) Winter graduated along with Harel from Social Services Worker — Native Specialization, a five-semester program delivered in partnership with Sault College.
“During the first three years, I worked full-time and I took off the 10 days when we came out (to study at Oshki),” said Mathe, who studied in Pickle Lake. “It was difficult with the long hours and then going back to work and going back to my family, but it all paid off in the end.”
Mathe plans to take further courses in the fall.
Gloria Collins, Tracy Gagnon, Margaret Kakekapetum, Roseanne Legarde, Jennifer Meekis and Stephanie Paavola graduated with Native Early Childhood Education diplomas while Suzanne Ostlund, Kristen Owen and Brenda Spade graduated with Pre-Health Sciences certificates.
Native Early Childhood Education is a five-semester program delivered in partnership with Cambrian College while Pre-Health Sciences is a three-semester program delivered in partnership with Confederation College.
“Sometimes it was easy and sometimes it was hard,” said Gagnon, who studied in Ginoogaming. “We all had our rough times in there but we made it through.”
Spade took the Pre-Health Sciences program because she wants to help people.
“I just had a vision that I was going to be a helper and a healer so I thought getting into the health field would be the best way to help people,” said Spade, who is originally from Namaygoosisagagun (Collins). “I was helping to take care of some family for a while and also I had to keep working, so because it was part-time, the schedule was flexible for me to be able to complete everything.”
Spade is looking to continue her education in about a year at Lakehead University’s nursing program.
“I’m really proud to see all of these people graduating,” Spade said about her fellow graduates. “It gives me a lot of hope.”