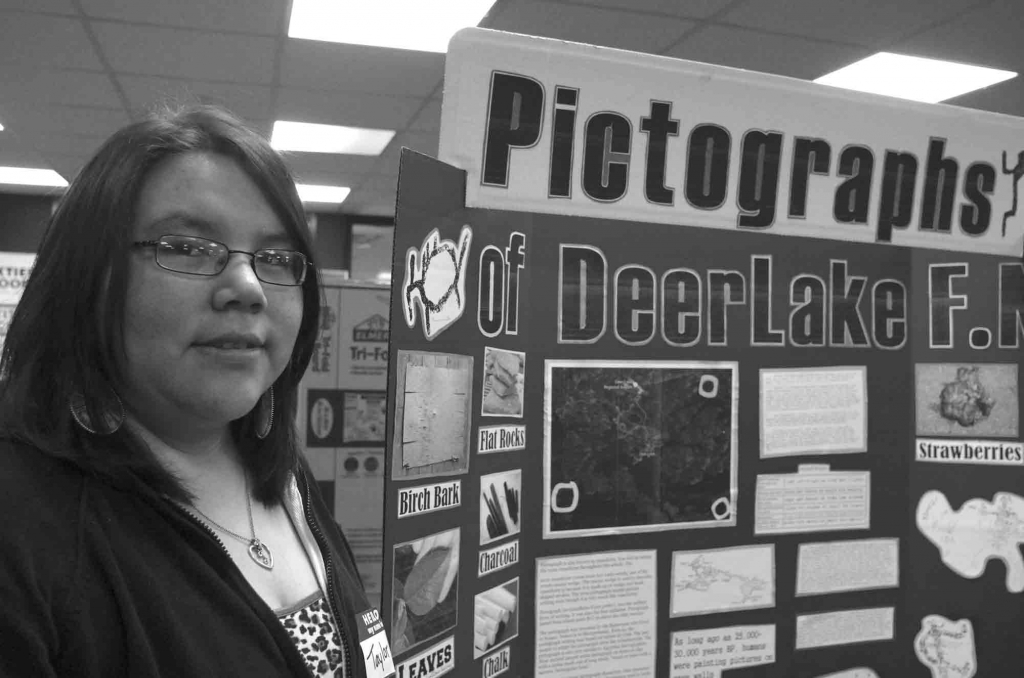 Deer Lake’s Misti Harding won the Best Use of Primary Research award for her diabetes presentation at the 5th Annual Aboriginal Science Fair at Confederation College.
“Diabetes is a pretty common disease and everybody knows about it but when they came to my presentation, they learned stuff that they didn’t really know, like why it is more common in Aboriginals,” said Harding, a Grade 12 student at Dennis Franklin Cromarty First Nations High School in Thunder Bay. “In earlier days, Aboriginals used to go boating and fishing and hunting for their food. They would go and chop down wood for their stoves. They were just a lot more active — they didn’t have motor boats, so they paddled and were a lot more active.”
Harding said many Aboriginal people no longer go hunting or fishing.
“They don’t have to, they just buy junk food from the store,” Harding said, noting her community has a KFC outlet. “There is not a lot of exercise on a reserve; it’s hard to exercise on a reserve.”
Harding received a good response to her award, a tablet-laptop combo, at DFC. And the school nurse was proud because she had helped Harding to do her blood test for the presentation.
“I did a little experiment on doing blood tests with random people, non-Aboriginals and Aboriginals, and there was some test results proving ... that Aboriginals are more prone to diabetes,” Harding said.
Harding was one of about 17 Grade 8-12 students who participated in the April 11 Science Fair, which was hosted by Confederation College’s Let’s Talk Science outreach program and Lakehead University’s Aboriginal Mentorship program.
“The ability of Aboriginal students and others to participate in this event has created a wonderful awareness and celebration of Aboriginal people’s accomplishments and traditional knowledge both for the participants and for the community at large,” said Barbara Walberg, science fair judge and coordinator of the Native Child and Family Service program at Confederation College. “This unique event has also provided the students with an important positive experience with the academic world that embraces the Aboriginal perspectives, traditional culture and world view.”
Jared Visitor and Taylor Dalzell, from Crolancia Public School in Pickle Lake, won the Best Use of Indigenous Knowledge award for their presentation on the Aurora Borealis, or Northern Lights, and the Aurora Australis, or Southern Lights.
“We tied it into the different cultures of the world,” Visitor said. “We tried to gather all their legends as to why they thought there were lights in the sky at night.”
The two students also discussed what would happen if a coronal mass ejection were to occur in modern times.
“Back in 1859, the highest solar storm hit the earth,” Visitor said. “If that happened today, because we are so dependent on technology, we would be without power for months. It would have grave consequences for a lot of people.”
Dalzell said the presentation gave them an opportunity to “look deeper into something we were accustomed to.”
“We went into the science of it and we looked to see what actually happens at the core of the sun,” Dalzell said. “We also have a bunch of random facts and interesting things about the auroras, such as when the earliest datable observation of the aurora were, which was in 567 B.C. And the earliest drawings were from 30,000 B.C.”
The science fair was sponsored by Ontario Power Generation and the Oshki-Anishnawbeg Student Association at Confederation College.
“The science fair is designed for students to develop an interest in science, engineering and technology while celebrating traditional sciences,” said Sandra Stiles, director of Let’s Talk Science, a national charitable organization committed to community and school outreach by post-secondary students and professional volunteers. “It also gives them an opportunity to explore the college environment, hopefully inspiring them to enroll.”
Other award winners included: Jennifer Keetch, from Churchill High School in Thunder Bay, for Best Oral Presentation; Cassandra (CJ) Jolicoeur, from Dryden High School, for Best
Interactive Display and Sydney Haskins, from Superior CVI High School in Thunder Bay, for Best Visual Display.