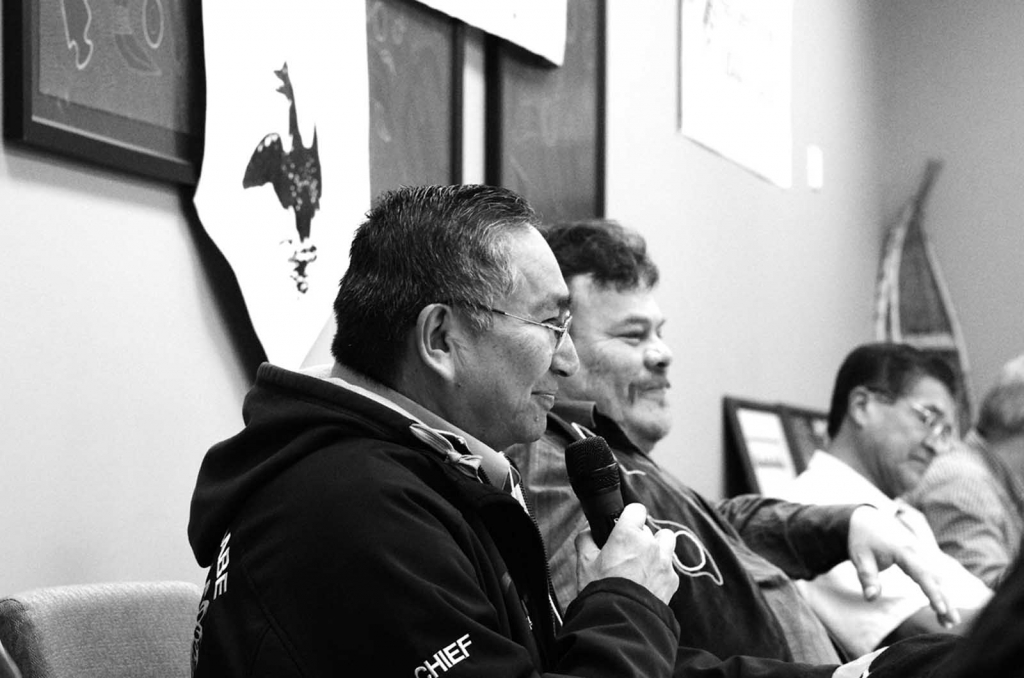 Grassy Narrows has rejected a recently announced Ministry of Natural Resources plans to proceed with further clearcuts in the Treaty #3 community’s traditional territory.
“Premier Wynne, it is within your power to ensure that the mistakes of the past are not repeated at the expense of another generation of Grassy Narrows children,” said Grassy Narrows Chief Simon Fobister in a Dec. 23 press release. “I call on you to intervene to repeal this hurtful plan and to ensure that never again will Ontario attempt to force decisions on our people and our lands.”
Even though the MNR’s Forest Management Guide for Natural Disturbance Pattern Emulation calls for 80 per cent of planned boreal forest clearcuts to be less than 260 hectares in size, the Whiskey Jack Forest Management Plan 2012-2022 calls for only 76 per cent of the clearcuts to be less than 260 hectares in size.
Ranging in size from two to 7,904 hectares, the planned clearcuts contain both new and older harvest areas up to 20 years old. In the planned clearcuts over 260 hectares, which average 964 hectares in size, the average size of new cut is 533 hectares, which accounts for 55 per cent of planned clearcut area.
Grassy Narrows has depended on the forest for generations to sustain their families and to practice their culture through fishing, hunting, trapping, medicine harvesting, ceremony and healing.
“Ontario has ignored our voices, and has added insult to injury by delivering this bitter blow during Christmas,” said Grassy Narrows hunter Joseph Fobister. “My heart sinks because I know that clearcut logging has devastating consequences for our people. We cannot allow this.”
The community expressed concerns about the potential elevation of mercury levels in fish due to clearcut logging. Community members were affected by the dumping of mercury from an upstream paper mill in the 1960s.
A 2012 report by a team of experts in mercury poisoning found that 54 people, or 34 per cent of the 160 people tested in Grassy Narrows and nearby Wabaseemoong (Whitedog), were diagnosed with Minamata disease and 40 people, or 25 per cent, were diagnosed with suspected Minamata disease.
Grassy Narrows also raised concerns about not being properly consulted on the logging plans.
“It’s absolutely imperative that the Ontario government maintain protocol regarding First Nation consultation as per the Canadian Constitution,” said Regional Chief Stan Beardy.
“First Nations in Ontario are still hoping that it can build a strong, trusting relationship with Ontario. Making unilateral decisions to harvest on traditional territory without a community’s consent only further erodes the relationship.”
The community also raised objections to the clearcutting of “much of what little mature forest remains” on their traditional territory.
“Grassy Narrows is requesting a meeting with Ontario Minister of Natural Resources David Orazietti,” Beardy said. “I urge the minister to meet with the First Nation to reach an understanding on how to move forward.”
An MNR spokeswoman said that supporting greater Aboriginal involvement in forestry is part of Ontario’s plan to create jobs for Ontarians, create opportunities for First Nations’ communities and strengthen the economy.
“Ontario is aware that the Whiskey Jack Forest is important to the First Nation communities in this area,” said Jolanta Kowalski, senior media relations officer with the MNR, in an e-mail reply. “Wood from the Whiskey Jack Forest provides economic opportunities as well as a wood supply to local mills, including two mills owned and operated by local First Nations’ members.”
Kowalski said Ontario remains committed to working with Grassy Narrows First Nation and values their continued involvement in discussions pertaining to the management of this forest.
“MNR and nine First Nations, including Grassy Narrows, have established a Sustainable Forest License table for the Whiskey Jack Forest Crown Unit,” Kowalski said. “Our goal is a new form of tenure for that forest.”
Grassy Narrows originally set up a blockade in 2002, the longest running blockade in Canada, on a logging road about five kilometres from Grassy Narrows to protest against clear-cutting practices that community members felt were interfering with traditional, constitutionally-protected activities such as hunting and trapping.
Since then the community has taken the provincial government to court, which led to a 2011 Ontario Superior Court decision that the province cannot authorize timber and logging if the operations infringe on federal treaty promises protecting Aboriginal rights to traditional hunting and trapping.
The decision was appealed by Ontario and the Supreme Court of Canada is set to hear the case on May 15, a month and a half after the Whiskey Jack Forest Management Plan is set to start on April 1. Supreme Court judgements are usually made about six months after the hearing, on average.