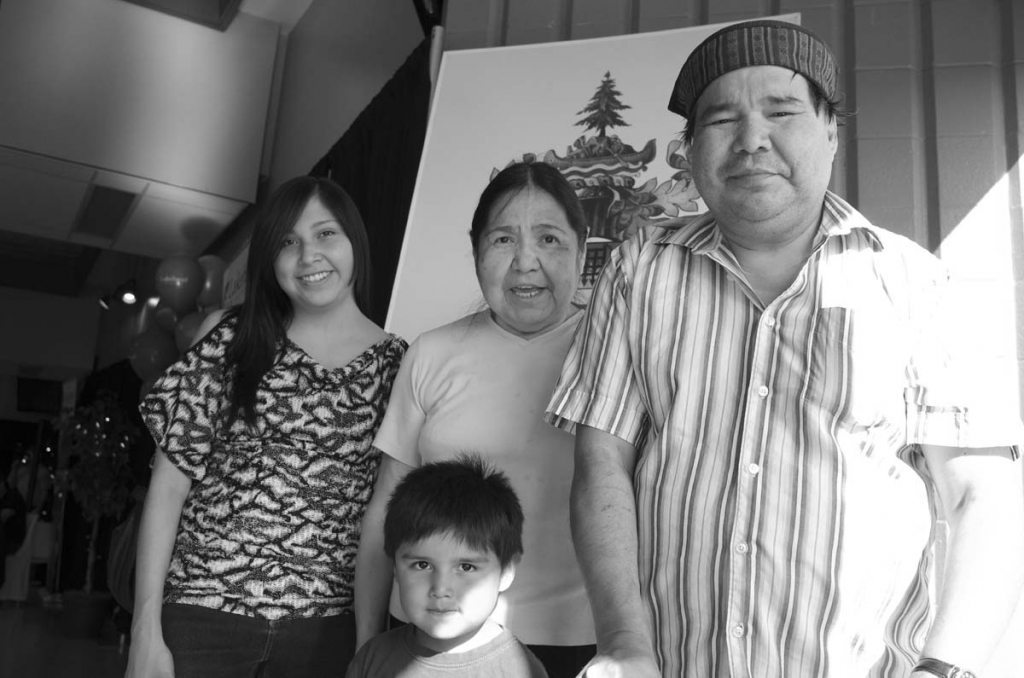 Lac Seul artist Ahmoo Angeconeb and two other First Nation Lakehead University alumni were among the five honoured at the 2014 Lakehead University Alumni Awards Dinner.
“I was quite surprised at first but I’m really honoured,” said Angeconeb, who picked up an Alumni Honour Award at the May 28 symposium in Thunder Bay. “It’s really overwhelming getting this award. I didn’t suspect I would get such an award.”
Angeconeb graduated with an honours bachelor of fine arts in 1993 and his work — drawings, serigraphs, linocut prints, paintings and etchings — has been featured in solo exhibitions throughout North America and Europe and gathered in public and private collections around the world.
“It was a good experience studying here,” Angeconeb said. “I had a good time here at the university — the visual arts department was so small that I got a lot of attention. The facilities were good, especially when it came to print making.”
Angeconeb was inspired by Norval Morrisseau and his unique style and depictions of animals, people and spirits has attracted the attention of international curators and collectors, including Prince Albert of Monaco.
“He deserves this award; he’s worked hard for it,” said Ahnisnabae Art Gallery owner Louise Thomas. “He’s known as a print maker and they’re pretty amazing.”
Temagami’s Mae Katt also picked up an Alumni Honour Award at the annual symposium. She has been honoured many times for her achievements as a clinician, health administrator, educator and researcher over her four-decade health care career.
“It’s a real honour to be recognized for a career that has been many years in northern health care,” Katt said. “I’ve really enjoyed the work, the challenges, the colleagues.”
One of Lakehead University’s first Aboriginal nursing graduates, Katt graduated with an honours bachelor of science in nursing in 1986 and a masters in education in 1995.
“It certainly puts you into a profession where you can make a lot of impact directly on clients (and) also on community health,” Katt said. “I’ve worked a lot on policy as well working for the federal government, so I think it just opened a lot of doors.”
She was named one of Lakehead University’s 40 Northern Lights in 2005, a Fellow of Lakehead University in 1996 and she received the President’s Award in 1986.
“I was actually a coordinator of (Lakehead University’s) Native Nurses Entry Program,” Katt said. “Through that we were able to graduate 65 nursing students, who are now working out in the communities.”
Pays Plat’s Christopher Mushquash, who is nationally recognized for his expertise in First Nations mental health and substance use, picked up an Outstanding Young Alumni Award. He collaborates with First Nations to create community-based solutions to issues such as substance abuse.
“It’s a really nice honour,” Mushquash said. “It speaks to the importance of the work, maybe not so much perhaps the person who received the recognition, but rather the work itself and the relationships needed to carry on the meaningful work.”
After graduating with a masters in experimental psychology from Lakehead University in 2004, Mushquash completed his doctorate at Dalhousie University.
“The opportunity for working closely with mentors in the field of indigenous health research was really something that enabled me to find my way and find what was most important for me so I could develop the skills that I thought might be helpful,” Musquash said about his education at Lakehead University.
Mushquash earned the 2013 President’s New Researcher Award from the Canadian Psychological Association and he has garnered more than $2,227,000 in research grants and contracts since 2011.
Lakehead University professor Dolores Wawia was thrilled to see three First Nations alumni among the five alumni award winners.
“It’s good that more Native people are being recognized for their accomplishments,” Wawia said. “To see three get an award at this time is great.”
The other two alumni award winners were Ashleigh Quarrell, who picked up an Outstanding Young Alumni Award, and Mark Tilbury, who picked up the Alumni Legacy Award.