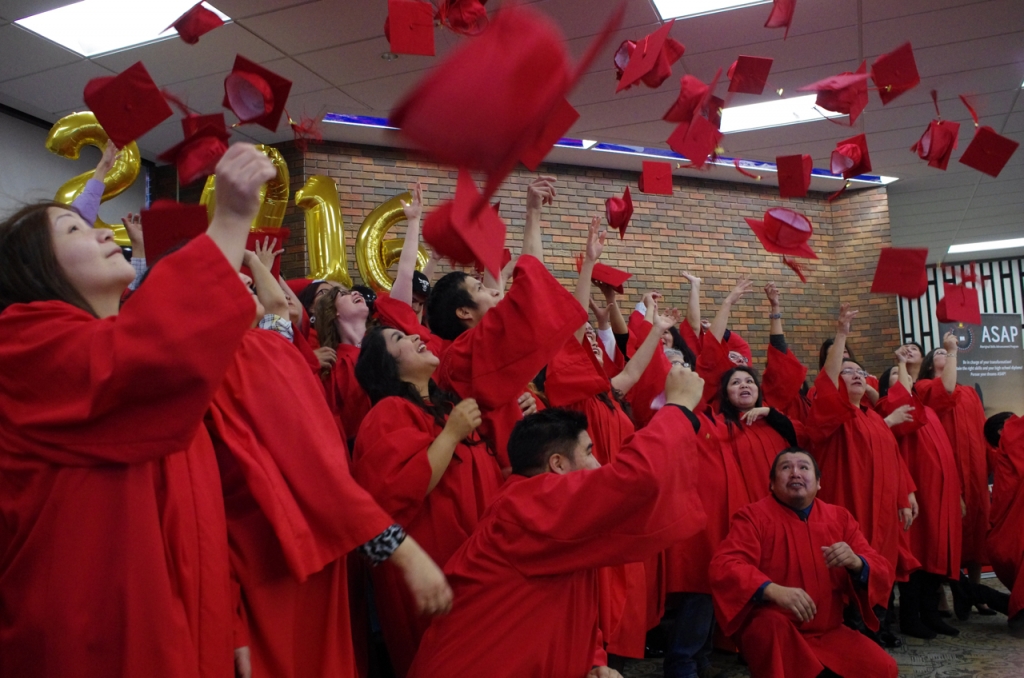 Aroland’s Greg Meshake plans to study culinary, carpentry or welding at Confederation College after graduating from Kiikenomaga Kikenjigewen Employment and Training Services Aboriginal Skills Advancement Program.
“I chose (culinary) because I have a passion for cooking,” says Meshake, one of two valedictorians at the March 3 graduation ceremony at the Davinci Centre in Thunder Bay. “I do enjoy cooking and I’d like to learn more skills on how to do it properly.”

Meshake chose carpentry because he has worked in carpentry for most of his life. He chose welding for the opposite reason — he has never done any welding before.

Meshake credits the community the students built and the support they provided for each other for their success.

“And the respect we had for one another was a good part of our learning program,” Meshake says. “With the people you’ve known before, you get to know them a little more. And with the new friends that you meet, you get so close to them that you have to look after each other.”

The 69 graduates earned Ontario Secondary School Diplomas during the program, with many also completing their post-secondary entrance requirements.

Aroland’s Angela Magiskan completed the program to provide a role model for her grandchildren.

“Everything I do, I do for my grandsons,” Magiskan says. “I’ve got two really beautiful boys that I really want to take care of. I want to be a good role model for them and just do what I can to live a good comfortable life.”
Magiskan says it is never too late to go back to school.

“I’m super proud of myself,” Magiskan says. “I didn’t think I could make it, but here I am.”

“Also I’m going to follow it up with some English and math,” Spence says. “I’m trying to set an example for my youngest son.”

“I never missed a day so I’m pretty proud of myself right now,” Spence says.

Matawa First Nations CEO David Paul Achneepineskum says the ASAP program was a second chance for many of the graduates.

“It’s great to see that on their second chance that they graduated,” Achneepineskum says. “Because these (graduates) were much older, I believe they have an idea of where they want to go. They have their dream they had before, and now it is becoming a reality.”

The program is part of Phase 2 of the KKETS training model, which is designed to prepare Matawa First Nations citizens to move forward with further employment and training opportunities to meet potential labour demands in the Ring of Fire mineral exploration area.

The pilot program had 62 graduates in 2012-13 and the 2014-15 program had 64 graduates. This year’s program was the first year of a three-year agreement with Ministry of Training of Colleges and Universities.
“We have many opportunities ahead of us and we need to use these tools to strengthen our nation,” says Morris Wapoose, KKETS executive director. “We encourage our students, the future leaders, to continue learning. KKETS has striven to give them a strong foundation so they can be confident to achieve their goals and dreams. It is time for our Anishnabe people to move forward.”