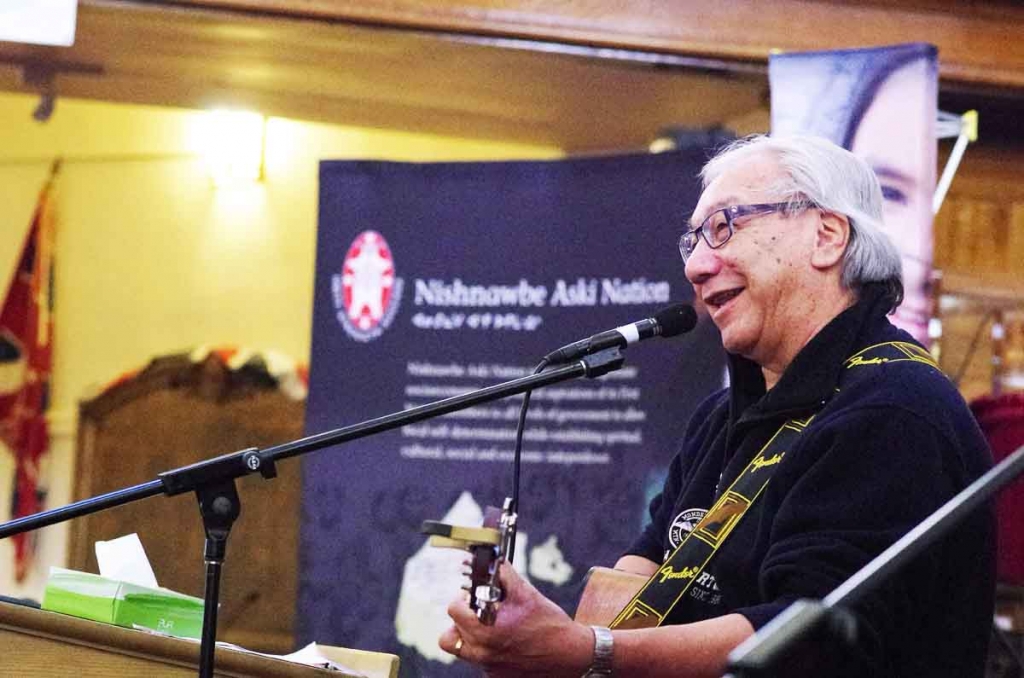 Rapping dad Derek Clark was a hit during the 10th Embrace Life Forum, held Feb. 18-19 in Thunder Bay.
“He’s a Cherokee Indian — he went through a lot of child care and foster homes,” said NAN Deputy Grand Chief Goyce Kakegamic. “He identifies with a lot of youth who are in counselling. He was (involved with) drugs and alcohol and a broken home, so he was a very interesting speaker for our youth.”
Clark was one of three “headliner performers,” including The Hoppers and Tim Lovelace, who performed during two free Embrace Life evening concerts at the Thunder Bay Community Auditorium. The Hoppers are known as America’s favourite family of gospel music and Tim Lovelace is a comedian-motivational speaker.
“The auditorium was full with a mainstream audience who were very appreciative of the talent we brought in,” said Gloria Hendrick-Laliberte, public environmental education coordinator at Nishnawbe Aski Nation.
Sagkeeng’s Finest, a trio of jiggers who won the Canada’s Got Talent reality show in 2012, Jerome Harper, Bernard Mekanak, Darius Ferris and Abe and Max Kakepetum also performed during the evening concerts.
“It was a great opportunity for us First Nation performers,” said Darius Ferris, a Constance Lake band councillor. “It gives us a lot of exposure for the talent we have as First Nations. Not only looking at the talent, but also what our music can do to other people’s lives. It touches them and influences them in a good way.”
In addition to the two concerts, a series of workshops was held at St Paul’s United Church about a variety of topics, including grieving, parenting, residential schools, family, healthy eating, mentoring and role modeling.
“The speakers are all very motivational and inspirational,” Hendrick-Laliberte said. “Their personal experiences are so moving. It’s a faith-based event of all denominations, all communities, all genders, all ages, so it crosses every possible barrier you can imagine.”
Lakehead University associate professor Raymond Neckoway encouraged people to watch out for the food patterns they are passing on to their children during his Healthy Eating presentation.
“Our family exerts pressure on us to eat a certain way, a certain style, certain foods at certain times,” Neckoway said. “So when you sit down to watch a movie, instead of having vegetables and fruits, we had chips and popcorn. So that gets ingrained in your psyche and it becomes a regular pattern.”
Neckoway said his own family has ingrained that pattern, noting his daughter recently bought a bag of chips to eat while watching a movie.
“I reminded her that is one of those things I wish I could take back,” Neckoway said.
Barb Friesen, client services representative for Sioux Lookout First Nations Health Authority, was impressed with Gary Quequish’s Raw Deals/Residential School Effects presentation.
“What I really liked about his story is all the things he is doing,” Friesen said. “Even though all these things have happened to him, he has made a real difference in First Nation communities.”
A reflexology and massage therapy component was also added to the forum this year for participants who needed help with stress and tension issues.
“It’s been very well received,” Hendrick-Laliberte said. “Participants go in, get a back massage and back rub and they come out feeling refreshed and renewed.”
Kakegamic said the Surviving Despite Adversity presentation by Ron and Karen Marano also provided insights for youth.
“They were raised by a single parent,” Kakegamic said. “A lot of youth are in that situation too, so here was a shining example of how to overcome that. They survived and are doing well.”
The Embrace Life forums are held each year by NAN to bring spiritual and community leaders together to support social challenges, including suicide, in the communities.Concert-goers were encouraged to bring non-perishable food items for donation to Shelter House Thunder Bay and a meet and greet was held with the headline and First Nation performers.