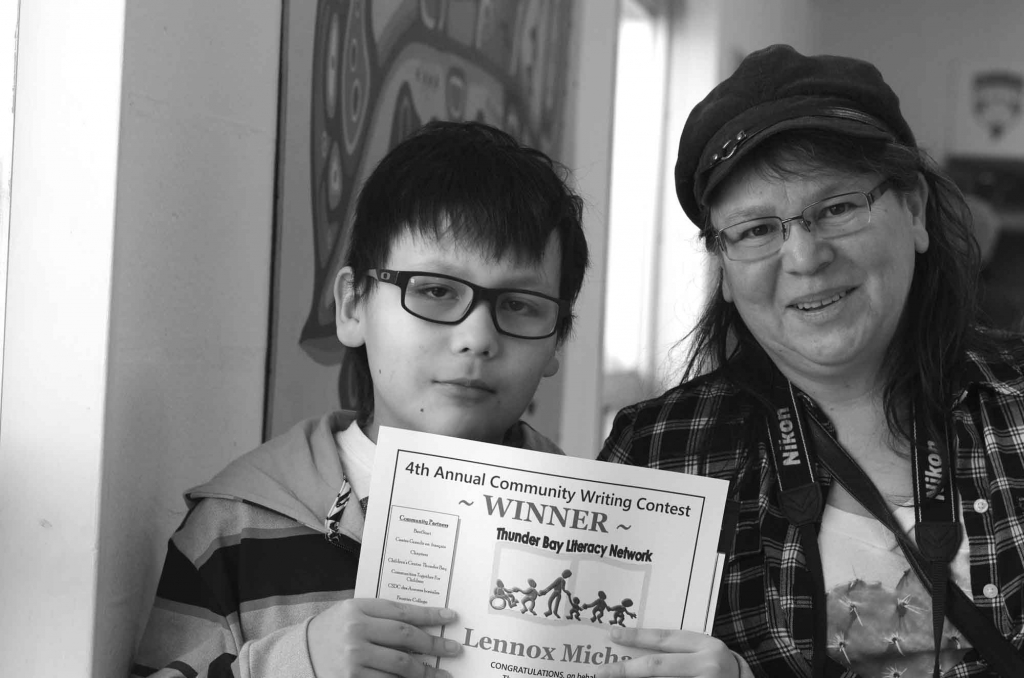 Geraldton’s Lennox Michon recently won an award for his multiple-choice ending book Impossible at the 4th Annual Writing Contest in Thunder Bay.
“It’s about this boy in his everyday life,” Michon said about his 20-page book. “In the first part of the scene he’s getting chased by a bully and one of the choices is you either go back to class or you just don’t think of anything and just get picked on.”
Michon was inspired by other books that also had multiple endings.
“I made (the book) before I even knew about the writing contest,” Michon said. “The other book I was going to write and enter the contest, I didn’t have time to finish it so I just entered (this) book. And it won.”
Michon and about 60 other youth won awards for their entries in the Writing Contest, which was held on Feb. 27 at Dennis Franklin Cromarty First Nations High School by the Thunder Bay Literacy Network - Writing Contest Committee, in partnership with Communities Together for Children/Best Start and Frontier College.
“I’ve seen a lot of great work and and a lot of effort put into some of the entries we received this year,” said William Campbell, Aboriginal projects coordinator at Frontier College. “This is the second year we’ve been here (at DFC). We’re going to be awarding DFC with an award this evening for their sponsorship of this event and opening their doors for us.”
The Writing Contest was developed to promote literacy through family learning and to support young writers to express their creativity, with entries growing from 50 in 2011 to 180 in 2013.
“I would like to see more First Nation students participating,” Campbell said. “We do have a few this year, but I would like to see them enter and participate in events like this more to promote their literacy. They’re going to need that later on in life and in school.”
Youth are encouraged to submit entries in English, French and Aboriginal languages, with a variety of categories, including fiction, non-fiction, story books, picture books, poetry, legends and comic book/graphic novels.
Vivian Michon, Lennox’s mother, was proud of her son’s work in the book.
“He taped it together and made it look like an actual book,” Vivian said. “When I heard about the contest, and he had written the book earlier at Christmastime, I said ‘I know what I’m going to do’ and I entered it for him.”
Vivian felt Lennox’s book would win an award.
“I’m really proud of him,” Vivian said. “It’s a book that I don’t think I could even write. It’s pretty intricate.”
Vivian said her son has always been creative.
“He’s always had quite an imagination,” Vivian said. “Other kids in his class say Lennox is a real genius.”
Vivian said the Writing Contest is a great opportunity for youth.
“It gives you a chance to be proud of your child,” Vivian said.