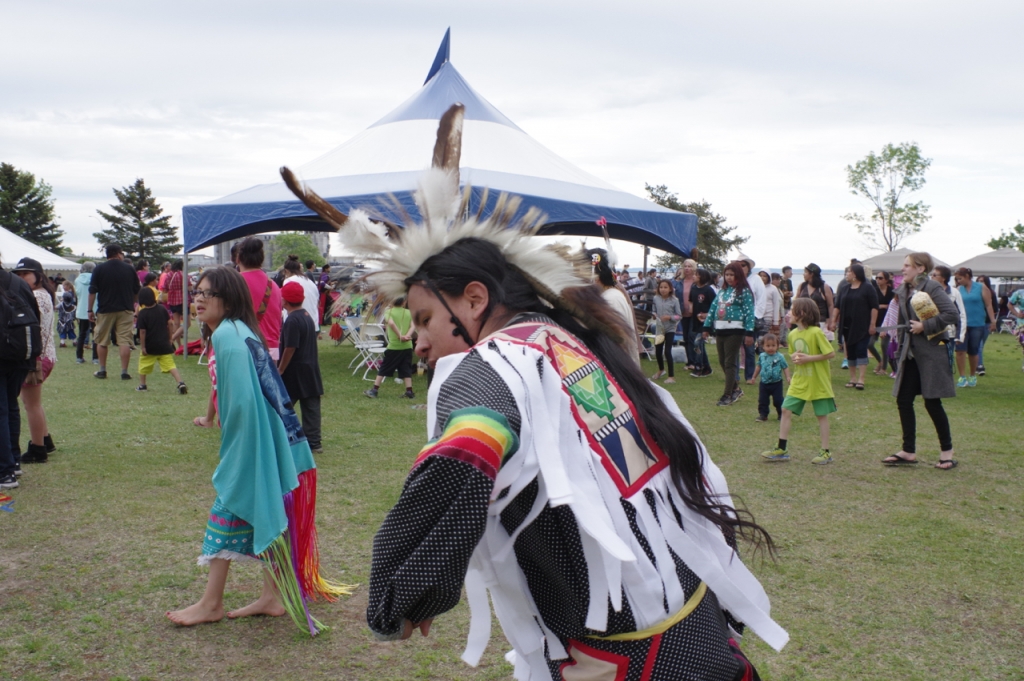 Grass dancer Munsee Neekan was one of about 100 registered dancers at the National Indigenous Peoples Day Powwow at Prince Arthur’s Landing in Thunder Bay. Photo by Rick Garrick.

A group of seven Aboriginal Youth Leadership Program (AYLP) graduates were recognized with awards and an honour song at the National Indigenous Peoples Day Powwow in Thunder Bay.

“It’s such an honour to be here to accept these awards and to take part in this program,” says Farren Forbes, a Rainy River First Nations citizen. “It started out with a big group, but with the seven we have left here with us today, we really got very close with each other. We bonded and we grew with each other as leaders.”

James Kiriak, another AYLP graduate, enjoyed working with the other youth in the program, which began last fall at a retreat in Dorion, a community located east of Thunder Bay.

“It was a little bit challenging working in a team,” Kiriak says. “Once we figured it all out and connected, it all came together and here we are now today.”

“The one that stood out (most) to us was our last day,” Forbes says. “We got to go up onto (Mt. McKay) and walk around and learn more about the mountain.”

Kiriak encourages other youth to get involved with AYLP, which is currently looking for youth to be involved in this upcoming year’s program.

“If there are any youth out there that are looking for a purpose and are looking for something to do, to take small steps, this could be the right step for you,” Kiriak says.

The AYLP is a joint venture between Leadership Thunder Bay and the TBIFC. It is based on the seven grandfather teachings: wisdom, love, respect, bravery, honesty, humility and truth.

“I’m just excited that we are continuing to graduate Aboriginal youth under the Aboriginal Youth Leadership Program,” says Frances Wesley, a TBIFC representative. “It’s something that we really need to instil, pride and confidence, in our young people. With all of the negative things that are going on here in our community, it’s really nice to see young people thriving and wanting to help others in the things that they’ve learned.”

Wesley says application forms and information about AYLP is available online at: www.leadershiptb.com/aylp/.

Thunder Bay’s National Indigenous Peoples Day celebrations began with a sunrise ceremony at 5:45 a.m. at Prince Arthur’s Landing, continued with the opening ceremonies at 11 a.m., the powwow at 12 noon, the feast at 5 p.m. and an open air concert with Classic Roots at 8 p.m. A teaching lodge organized by the Rites of Passage multi-cultural and multi-generational project was also held near the Spirit Gardens on Thunder Bay’s waterfront. A wide variety of vendors and organizations also hosted booths around the Port Arthur’s Landing field.

Although Constance Lake’s Corey Wesley enjoyed the day, he wants all Canadians to have an opportunity to have the day off from work so they could also celebrate National Indigenous Peoples Day.

“I think National Aboriginal Day or the celebration of the summer solstice should be a national holiday for everyone,” says Corey Wesley, who brought his Juice Monkey’s concession trailer to the event. “It’s just important because it is the first day of summer and the longest day of the year.”

“This bill is inspired by the Truth and Reconciliation Commission call to create a statutory holiday to honour residential schools survivors, their families and their communities,” Jolibois says. “This holiday will further ensure the public’s recognition of this history, legacy and the treaty relationship which remains a vital component of the reconciliation process.”

“I think it is important,” Mosquito says. “Events like this are intended to create awareness of our peoples, to promote awareness and support and to create a better understanding of who we are, what we are and our world views.”