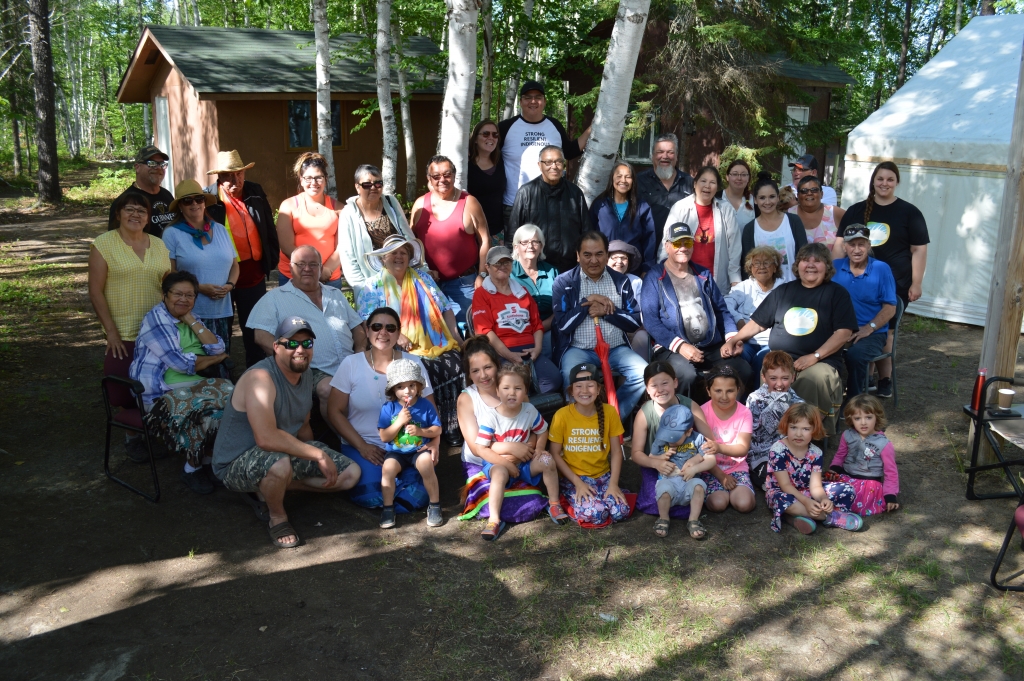 photo by Xavier Kataquapit
Indigenous Language Gathering was organized by the Temiskaming Native Women’s Support Group (TNWSG) at Dorothy Lake near Kirkland Lake July 6 and 7. Here we see some of the participants who took part in the two-day event.

The Temiskaming Native Women’s Support Group (TNWSG) hosted a weekend Language Gathering at Dorothy Lake near Kirkland Lake on July 6 and 7 to promote and encourage language speakers in the north to share their knowledge. The event brought together First Nation Elders and language speakers from the First Nations of Beaverhouse, Matachewan, Temiskaming, Wahgoshig and citizens of the Metis Nation. They came together for the event with community citizens and their children who wanted to learn the language of the Ojibway dialects of Matachewan and Beaverhouse. Other Native dialects were spoken during the event. The gathering was held at Dorothy Lake, which is owned by Beaverhouse FN.

“We wanted to host the event in a traditional setting on the land to give our Elders an opportunity to be in a familiar environment where they could share stories and repeat and use their language like they did when they were growing up. Having people around a fire with their Elders starts conversations and moments where we can learn the language. It is also a fun time as the stories often bring about laughter and good times which makes these stories more memorable for everyone,” said Anne Batisse, Executive Director, TNWSG.

Batisse, together with Arlene Hache, Keepers Of The Circle Program Developer, led the proposal effort to access funding which was provided through health and wellness programs by the Ontario provincial government. The planning process was also led by an Elders Circle composed of Elders from the Kirkland Lake and Temiskaming area First Nations and organizations. The event was also made possible with the assistance of Nancy Wabie, Beaverhouse FN; Bertha Cormier, Matachewan FN; Chelsea Daley, Ellen Joyner and staff from the TNWSG and Beaverhouse FN. The gathering was led by traditional drummers and teachers Roberta Oshkabewisens, TNWSG; Henry Joseph, Wahgoshig FN; Elder Marilyn Chevier-Wills, Temiskaming FN.

“I am very happy with the turnout here today. We are planning for more of these important language gatherings and we hope this becomes a regular program and event,”explained Cormier.

Elder Tom Wabie is one of the last few citizens who was born and raised at the old Beaverhouse FN settlement near Kirkland Lake. He shared his stories and memories of the traditional life his family had in the wilderness outside the town.

“As a child I learned my language as that was the only way our parents and grandparents spoke to us. As an adult I became part of the Canadian white culture and over time I didn’t use my language. My children didn’t get the same chance to learn the language as I did and I regret that. Now they are doing their best to learn it again and when I see these small children participating here it gives me hope that they will hold on to their language and their identity,” said Elder Wabie, Beaverhouse FN.

His son Wayne Wabie is the current Chief of Beaverhouse FN.

“It feels good to see everyone here today to connect with one another, to learn and to have a bit of fun while doing it,” said Chief Wayne Wabie.

Elders from the surrounding territory also came to attend the event to share their knowledge.

“I’m very happy here today to see everyone coming together and to take steps to share our language with those who want to learn,” said Elder Marie Boucher, Matachewan FN.

She and Elder Vina Hendrix both attended the event as Elders from their home community where they were born and raised. They are the last fully fluent speakers of their Ojibway language dialect from Matachewan.

“I’m happy to see the adults doing their best to learn the language but it also makes me feel good to see our younger ones learning too. They need to hold on to to their language and remember their heritage and to be proud of where they come from,” said Elder Hendrix.

Contributing Elder Chevrier-Wills of Temiskaming FN, a traditional drummer and singer was on hand to help out with the event.

“It is so great to be here and listen to stories and songs that are familiar to me and it makes me feel connected and at home,” commented Elder Chevrier-Wills.

The organizers are hopeful that they can turn this into a regular gathering with events that could take place in the autumn, winter and spring to encompass all seasons and give Elders an opportunity to share stories and activities that go with every part of the year.