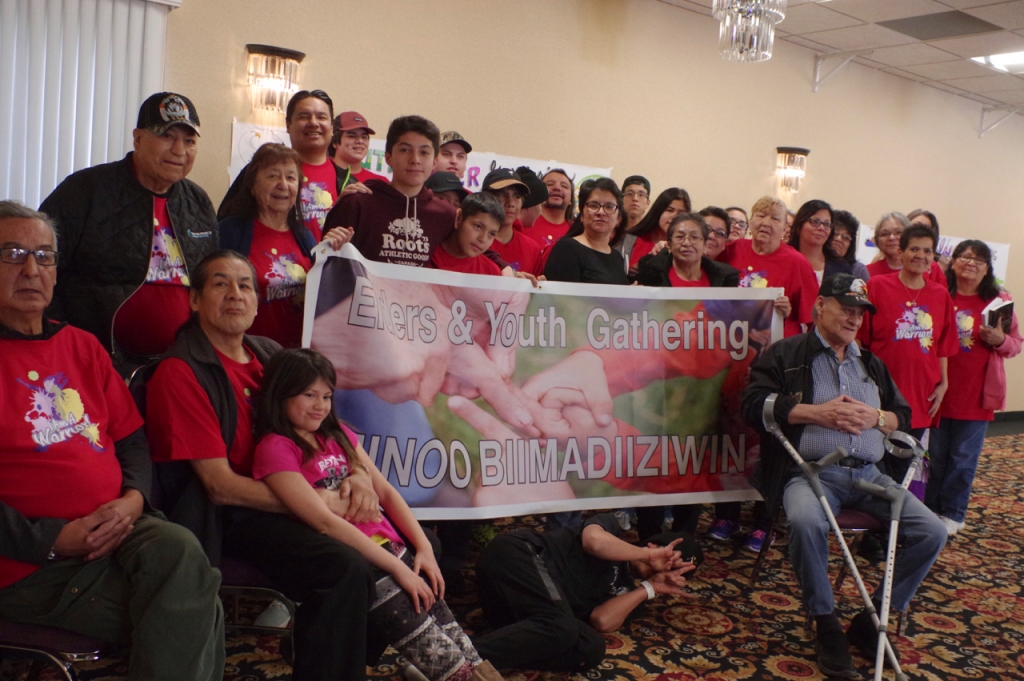 The Ginoogaming Elders and Youth Gathering was held at the Best Western Nor’Wester Hotel and Conference Centre in Thunder Bay.

A group of youth and Elders from Ginoogaming recently enjoyed the opportunity to participate in group activities during the community’s Elders and Youth Gathering, held in Thunder Bay.

“It’s good, and we’re having fun too,” says Rayn Fisher, a Grade 6 student from Ginoogaming. “It was interesting to learn about our culture too.”

Fisher appreciated the Breaking the Chain, Steps to Healing from Intergenerational Oppression presentation that Sandi Boucher delivered on the second day of the gathering, which was held at the Best Western Nor’Wester Hotel and Conference Centre.

“It’s good to learn what oppressed means and all that,” Fisher says.

Boucher says her presentation was about how to move from the past to the future.

“We (talked) about the past and how we got here,” Boucher says. “But now today is all about solutions, what do we do going forward, how do we heal, how do we change what we were taught so we can land where we want to be.”
Boucher says her presentation also includes information on internalized oppression.

“So how after so many generations, you don’t even need someone telling you that you can’t do it,” Boucher says. “We’re telling ourselves that now, so we stop ourselves before we even try. I’m showing them different examples of that, so that in the future they can identify it as oppression rather than just believing it.”

Cecil Mendowegan, Ginoogaming’s National Native Alcohol and Drug Abuse Program worker, says the oppression of First Nations people began about 100 years ago when they had to start living a different way of life.

“Myself, I was raised up the traditional way — I didn’t speak any English until I started going to school,” Mendowegan says. “Our younger generation, they know a little bit about that but it’s not really talked about too much. Now that they’ve been at this workshop setting, they know a little bit more. And they get a better idea of what our grandparents or our parents went through in the residential school system.”

The gathering also featured a presentation on Understanding and Overcoming the Effects of Intergenerational Trauma by Cathy Fobister on the first day.

“I’m working with the community to identify the impacts of the intergenerational trauma, how history has influenced our current belief systems, how history has influenced how we as Anishinabe live our lives today,” Fobister says. “The youth and Elders this morning had a traditional election to identify who was going to be their leader today, their chief. And then we signed a treaty where they all had to move from the big circle into a land base that was reserved just for First Nations. And then we had some individuals who were acting out, so they got thrown in jail and kind of disappeared from the group and their families.”

Ginoogaming Chief Celia Echum says the gathering was held to bring the youth and Elders together so they can get to know each other and work together.

“I like to call it closing the gap between the two age groups,” Echum says. “This way, hopefully the doors will be opened so we can start working more effectively in the community instead of the way we are living right now.”

Echum says the community has changed since cell phones and other electronic devices became popular.

“I think that is what keeps the kids indoors,” Echum says. “What we’re trying to promote here is to put the phones away and start listening. Communicating is what it is all about for these two days.”

Echum says the gathering is also about preparing the youth for the future.

“We’re looking at what is tomorrow going to bring them,” Echum says. “What are the changes they’re going to have to face compared to what we lived through and what our ancestors lived through since the signing of the treaty.”