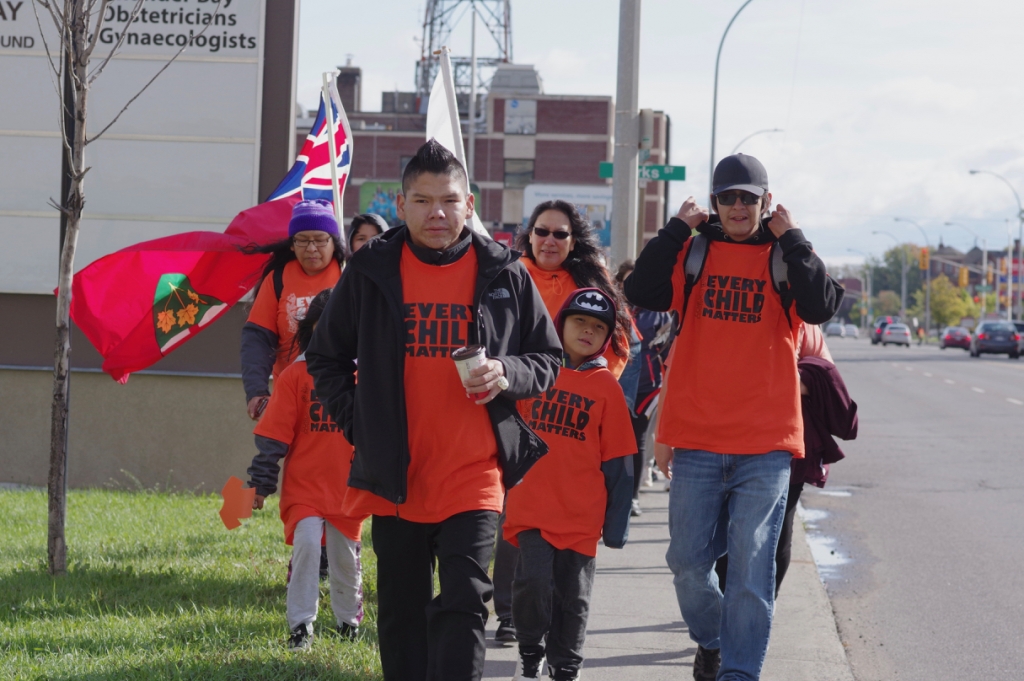 “Even though he is in his 60s now, he talks about the impacts that he still feels in his life, how this impacted him when he was sent to a residential school in Kenora when he was just a small boy,” Fiddler says. “We know that these impacts are still very much with us today in our communities, the fact that we are still losing children to suicide, to the child welfare system, even to the education system. The impacts are still there and it is up to all of us to address these things so that all of us can heal, not just Indigenous people, not just those who went to residential schools, but for all of us in order for us to be a better community and a better nation.”

The Orange Shirt Day Walk began with an opening ceremony at Paterson Park, located at the corner of May and Miles Sts. near the Thunder Bay Courthouse, before the walkers proceeded along Miles, Vickers and Authur Sts. to Pope John Paul II Senior Elementary School, where another ceremony was held at the site of the demolished St. Joseph’s Indian residential school.

“On Wednesday we lit the sacred fire at the site of the old St. Joseph’s residential school,” Fiddler says. “I’ve been there a number of times over the last three or four days, and it is so heartwarming to see people coming, especially young people and students coming to know more about what happened at residential schools and the importance of them learning more about that part of their history.”

An update on the St. Joseph’s Indian residential school monument, which was created through a partnership between the City of Thunder Bay, Nishnawbe Aski Nation and the Thunder Bay Catholic District School Board on the southwestern corner of the Pope John Paul II Senior Elementary School property, was also delivered by Ann Magiskan, Aboriginal liaison with the City of Thunder Bay.

“We’re working on having a bronze plaque, which should go in in the next six-to-eight weeks,” Magiskan says, adding that benches will also be installed in a circular fashion around the monument. “You will notice that the outside fences have been taken down, so this will be a place that people can come and reflect, offer tobacco and just remember and honour the lives (of students) that had come to this school.”

“That is why we are walking around without no spirits,” Towegishig says. “The same thing happened to me when I was in McIntosh (residential school), I left my childhood behind. And no matter how long your healing is, we still get flashbacks.”

Towegishig says he went through a ceremony to get his childhood back.

“That’s what we have to do, get back our childhood to be able to live again,” Towegishig says.

Oshkaatisak (All Young People's) Council member Randall Crowe says it was “awesome” to participate in the Orange Shirt Day Walk.

“It is good that we took part in this to honour the students that didn’t make it home and to honour the residential school survivors,” Crowe says. “I hope more people will come and see (the monument) just to know what this site represents and what that monument represents and what happened on this site to our people and the students that didn’t make it home.”

Orange Shirt Day is named after Phyllis (Jack) Webstad, who had her new orange shirt, which her grandmother had bought for her, taken away on her first day at residential school in B.C.