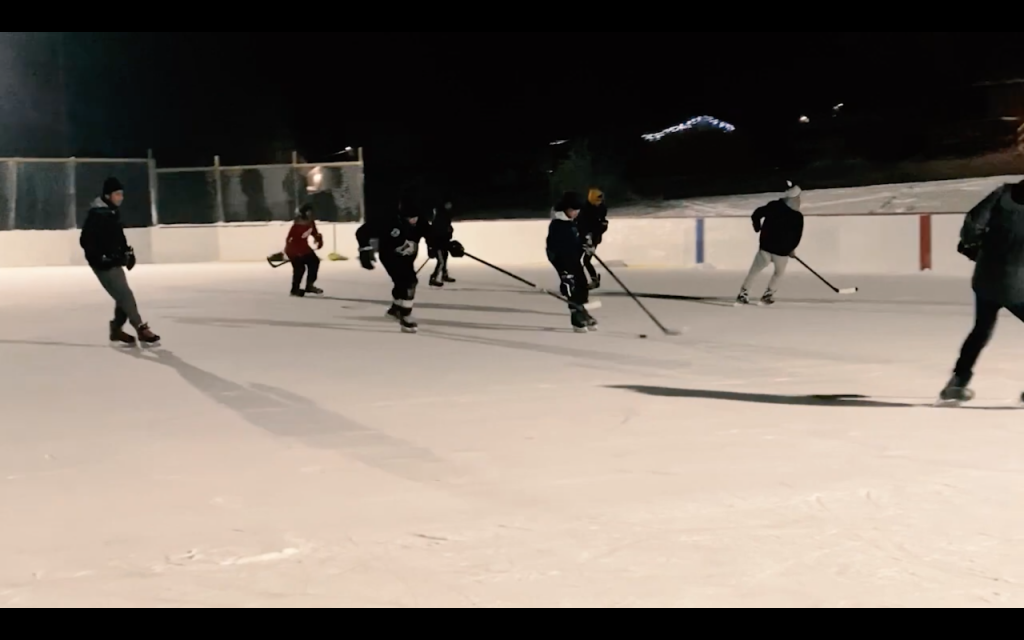 A group of hockey players enjoy a game at the Cat Lake outdoor ice rink, which will have its boards replaced next summer thanks to a $5,000 Tbaytel for Good Community Fund prize.

The Cat Lake Hockey Rink project in Cat Lake recently received one of two $5,000 Tbaytel for Good Community Fund prizes on Nov. 30 for repairs to the outdoor rink boards.

“It’s a great rink and everybody loves the location,” says Matt Klockenga, a missionary in Cat Lake. “But as far as the boards go that they used to build the rink, they’re on their last legs. So we thought we would reach out to Tbaytel and apply for this grant and see if we could win it, and it turned out we could so the plan is to replace the hockey rink boards with 2x6s instead of going the plywood route just to give it a little more strength. And we’ll put plywood at the bottom so when we flood the water won’t run out.”

Klockenga says the community does not have an arena so it is important to keep the outdoor rink open.

“It provides a lot of entertainment and activity,” Klockenga says, noting the rink is located in a central location. “It’s got nice LED lights on it so it’s lit up over night with a timer so people can flip on the lights and play even when we have early sunsets here in December.”

Klockenga says this year has been challenging to get the rink prepared due to the COVID-19 pandemic and mild weather conditions.

“Temperatures have been really mild,” Klockenga says. “But we’re getting close.”

Klockenga says they plan to purchase the 2x6s from one of the lumber suppliers in the area and then to transport the lumber over the winter road.

“We’ve got to try to make that $5,000 go as far as possible,” Klockenga says. “With lumber prices going up this year with the virus, we’ll probably try to delay our purchase as long as we can to give the lumber industry a little bit of time to recover.”

Klockenga says they have estimated that the $5,000 will enable them to purchase just enough 2x6s to go around the perimeter of the rink.

“We’re looking ahead recognizing that the current boards, while they are going to make it through this year and be good, they’re on their last legs,” Klockenga says. “Some of the boards are already breaking this year, there’s a couple of holes in them. We’ll patch them up as much as we can to make it work for this year but definitely next summer is when we’ll start replacing the boards.”

Klockenga says the community rallied together to support the project.

“We got over 22,000 votes,” Klockenga says. “We are really thankful on just how (Tbaytel) had their eyes on giving back to the communities. It’s a great community fun thing to be able to do.”

“We cannot express our thanks enough to Tbaytel and to everyone who voted for us — because of your efforts, and because of Tbaytel's generosity in supporting community projects like ours, every student at Keewatin Public School is going to be snowshoeing this winter,” says Shayla Smith, co-chair of the Keewatin Public Schools Parent Council. “Our staff, students and parents are so excited that we're able to add this activity to our Forest School programming, and we know the kids are going to have a great time adventuring on their brand new snowshoes.”

The A Mile in My Mocs project at Pope John Paul II School in Thunder Bay and the Musical Instruments for Safe Bed project at the Canadian Mental Health Association in Kenora also received $2,000 Tbaytel for Good Community Fund prizes.

The Tbaytel for Good Community Fund has provided $232,342 in funding for 86 unique community-based projects in 18 communities across northern Ontario since it was established in 2013.