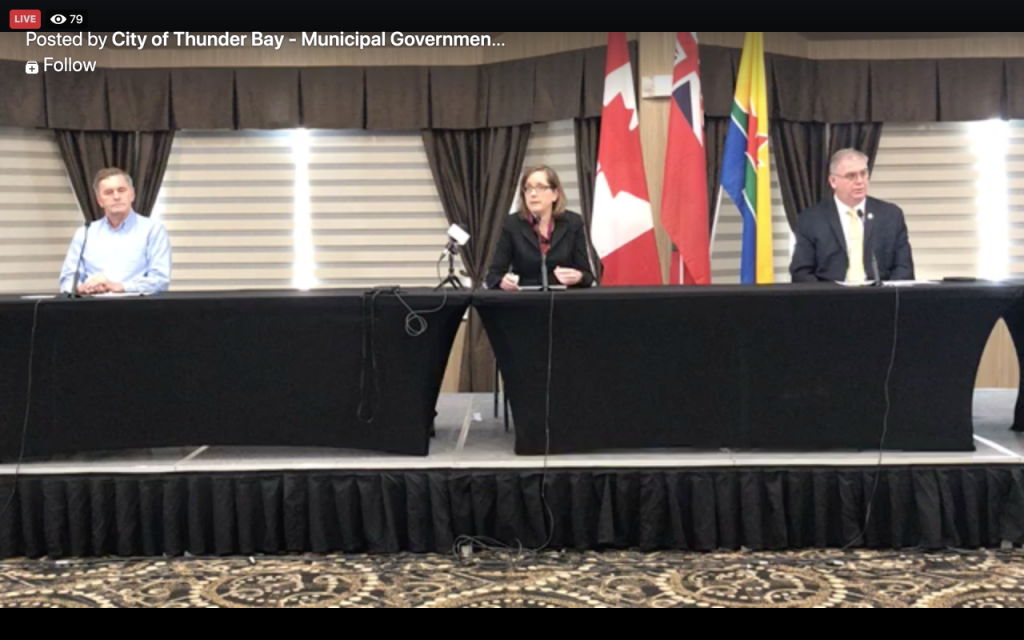 Muskrat Dam is closing its borders after March 27 to all traffic except for medical trips approved by a practicing physician due to the COVID-19 global pandemic.

“Here in Muskrat Dam the people have given direction to do so, and that will be effective Friday at midnight,” says Muskrat Dam Chief Vernon Morris. “We are aware of all the activity that is happening outside of our own community and in the urban setting as well and we are in close communication with other communities in our respective area.”

Morris says his community’s services are “very limited” as they are an isolated community.

“It’s not like living in the mainstream where you have access to health services, to all other services, infrastructure, supplies,” Morris says. “We don’t have that in remote northwestern Ontario, so whatever we are able to get in the community that is what we live on. So in order to be a safe community, we have to practice as the community advises — isolate the community until further notice.”

Muskrat Dam’s Closing the Borders notice also states that medivacs will be allowed at the discretion of the community’s medical staff, but private charters will not be allowed into the community without prior approval from the chief and council.

The notice also states that citizens are to stay home and wash their hands as recommended by health officials and the private sale of food plates is to cease immediately. The sharing of raw traditional foods, such as fish, meat and birds, is still allowed.

“I’ve had a number of phone calls all day and usually the parting words are: ‘Stay safe, be safe,’” Morris says. “So that is the same message I can give to anybody — stay safe and be safe.”

Thunder Bay health officials also called for citizens to stay safe by practicing social distancing and self-isolation to limit the spread of COVID-19 during a March 26 press conference at the Victoria Inn.

“Currently, as before, we have no confirmed cases of COVID-19 in the Thunder Bay District Health Unit area,” says Dr. Janet DeMille, medical officer of health with the Thunder Bay District Health Unit. “Close to 300 tests have been done — 163 have come back negative and the rest of them are pending. Across northwestern Ontario there has been only one confirmed case of COVID-19 — that was announced a while ago by the Northwestern Health Unit. It was an individual (from Fort Frances) who acquired it while travelling outside the country.”

DeMille says the increasing numbers of confirmed COVID-19 cases across Ontario, Canada and the United States puts people in the area at “increasing risk.”

“We need to act and put all the measures in place as though COVID-19 was actually here already,” DeMille says. “So all of those measures we can do as individuals and with our families, the hand washing, the coughing in the sleeve and the staying home when you are sick, these are really important right now.”

“But don’t forget to connect with others through electronic means and technology,” DeMille says.

Dr. Stewart Kennedy, COVID-19 incident manager with the Thunder Bay Regional Health Sciences Centre (TBRHSC), says no visitors will be allowed at TBRHSC as of March 27.

“There will be few exceptions — they will be on our website, palliative care patients, labour and delivery patients with their husband,” Kennedy says. “Basically the message is no visitors will be allowed, even their care partners will not be allowed in (TBRHSC). We have to prevent this virus from getting into (TBRHSC) as best we can.”

Kennedy says measures are being put into place for patients to communicate with their family such as a free phone service, and free television for patients who are in a room alone.

Kennedy adds that TBRHSC has been approved for a licence to do lab testing for COVID-19 and it should be available in two-to-three weeks depending on the supply chain.

The press conference is posted online at: www.facebook.com/CityofThunderBay/