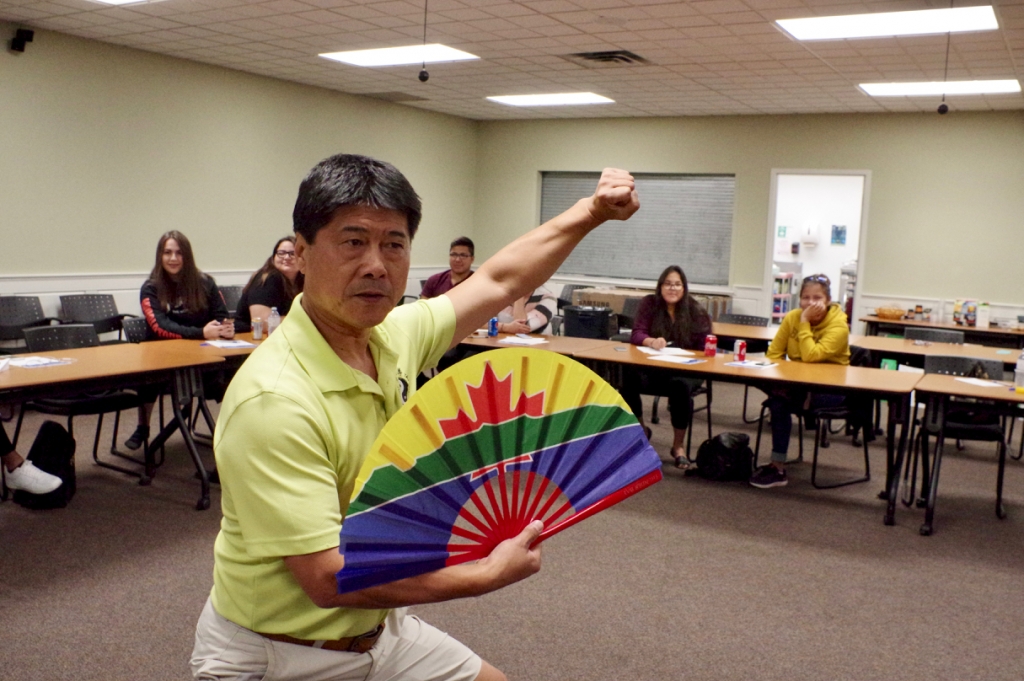 The Matawa First Nations Youth Leadership and Empowerment Workshop featuring speaker and author Sandi Boucher and Tai Chi master Peng You was a hit with a group of about 14 youth.

“They loved it and Peng You was hilarious,” says Miranda Waboose, a postsecondary summer student at Matawa who organized the workshop. “There were very meaningful things we learned this morning with Sandi (such as) the
intergenerational trauma that we all face, even generations now, and how we have to unpack those things and pack in new positive things where we believe in ourselves and believe we are worthy and that we are resilient and we are strong and that we can go further in life.”

Peng You says he shared his Tai Chi concepts and his life in Thunder Bay with the youth during the workshop, which was held at the Matawa First Nations building in Thunder Bay.

“In 1990 I moved to Thunder Bay from a big city with 20 million people,” Peng You says. “I was shocked. You have to use your Tai Chi concepts, which is balance and to work hard for it. (I had) limited English, I didn’t even know what was ketchup. Catch who up. I started to learn and I opened up the restaurant in 1992, a couple of years from ground zero.”

Peng You says he told the youth that life is a balance and he also encouraged them to dream big.

“That is why I used some Chinese language — I said one day you may go to China with me,” Peng You says. “I took a group of Aboriginal youth (to China) in 2015 and we powwowed on the Great Wall. If you don’t believe in yourself or you don’t have a goal or see the big picture of the big world, you go nowhere. So that is what I tried to tell the young people.”

Boucher says the workshop was called: Not Their World.

“What I wanted to really target was the fact that our youth seem lost,” Boucher says. “Their parents and their teachers talk about a world that they don’t even live in anymore.”

Boucher says the older generations didn’t have social media and the challenges stemming from it that today’s youth face.

“So their world is different and I wanted to show them that that is not them being mistaken, that is the truth,” Boucher says. “And I really wanted them to start believing in themselves and their own wisdom and their instincts and to break away from the past.”

Boucher says she loved the strength of the youths’ voices.

“By the end of the day they are asking questions and we are having really important discussions,” Boucher says. “Our youth are stronger than we think they are. We have to get better at listening and actually following through, not just staying quiet while they talk. A lot of them mentioned that they’ve tried speaking up and no one listens. I think if we listen, they have a lot of the answers.”

Frances Wesley, health co-operative planner with Matawa, says the organization of the workshop provided Waboose with an opportunity to gain some skills and a successful achievement that she could put on her resume.

“I wanted her to learn to organize events, to build on her self esteem, to be more confident in what she does and to practice some of her interpersonal skills,” Wesley says. “She’s never done this before and I think she did an amazing job.”