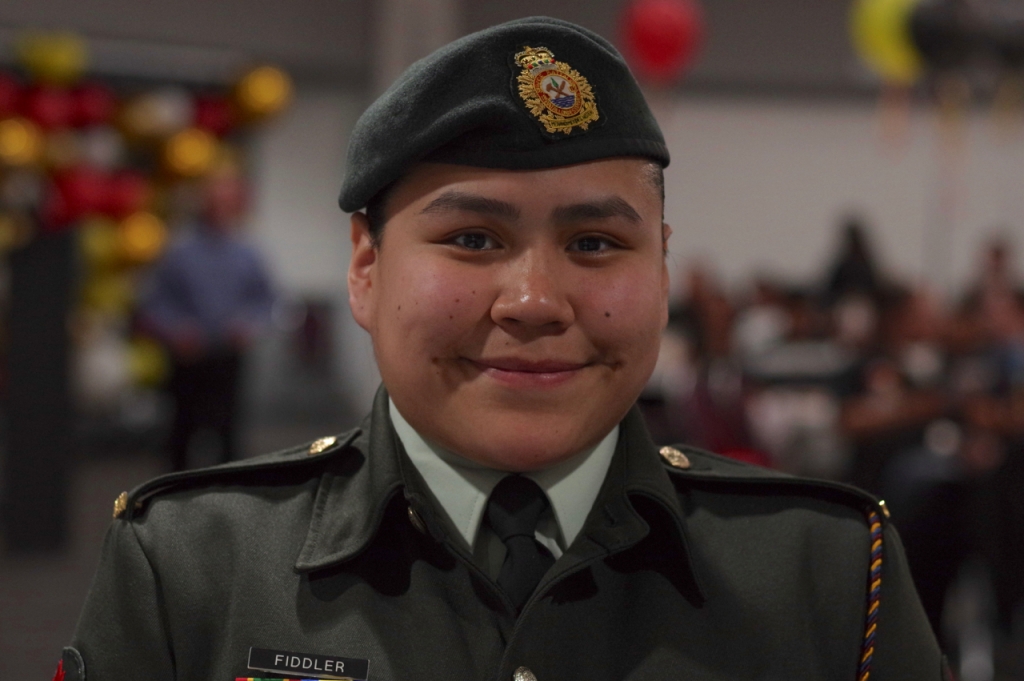 Sandy Lake’s Kayla Fiddler was recognized with a Personal Achievement Award on May 2 during the 14th Annual Northwestern Ontario Aboriginal Youth Achievement and Recognition Awards in Thunder Bay. Photo by: Rick Garrick.

Fiddler, a Hammarskjold High School student and cadet warrant officer with the 2294 Royal Canadian Army Cadet Corps, was presented with one of six Personal Achievement Awards during the AYARA ceremony, which was held on May 2 at the Italian Cultural Centre in Thunder Bay.

“It feels good for me, considering I’ve been working so hard personally for this award since I was 12-years-old,” Fiddler says. “I actually started cadets when I was 13. You learn many skills, such as expedition skills, and also just making friends.”

In addition to participating in many optional activities with the cadets, including the biathlon, marksmanship and drill teams, Fiddler also recruits new cadets from her peer group.

Kahgee, a Sir Winston Churchill Collegiate and Vocational Institute student and medal-winning boxer, was presented with one of four Athletic Awards during the AYARA ceremony. He competed at the Brampton Cup and the Ontario
Winter Games this past winter, where he won bronze and silver medals.

Kahgee discovered his passion for boxing at the Underground Gym in Thunder Bay, where he has volunteered and mentored other youth.

“I actually want to join the military,” Kahgee says. “It could be a good career for me.”

Moonias, a Hammarskjold High School student, student representative on Lakehead Public Schools’ Aboriginal Education Advisory Committee and co-founder of the Aboriginal Student Committee, was presented with one of four Advocacy and Activism Awards during the AYARA ceremony.

“I help out whenever I can,” Moonias says. “I just want to make (school) a better experience for everybody.”

Moonias got involved with the committees after being encouraged by a teacher.

“A teacher pulled me aside and said I had some leadership qualities,” Moonias says. “I didn’t really believe him at first but it has really changed a lot since.”

Moonias also volunteers on a weekly basis by cooking a bannock for his fellow students during the lunch hour.

“In the future I dream to be prime minister of Canada,” Moonias says.

Lac Seul’s Ann Magiskan, Aboriginal liaison for the City of Thunder Bay, was presented with the Recognition Award during the AYARA ceremony.

“I was shocked, surprised and very honoured,” Magiskan says. “The work that I have done over the years has always been about our children, our grandchildren, the ones that are coming up behind us.”

The AYARA was originally established as The Niigaantige Career Fair in 1987.

“It is very important to recognize our youth as they are going through their journey and figuring out what they want to do when they are older,” says Sharon Smith-Baxter, chair of the AYARA committee. “It gives them some encouragement and gives them a positive vibe going towards the future.”

“We have a lot more sponsors on board,” Smith-Baxter says. “Bell joined us this year, which was great. They actually approached us because they heard about the great things of our event and wanted to be a part of it, so we keep growing bigger and better and recognizing so many youth from across northwestern Ontario.”