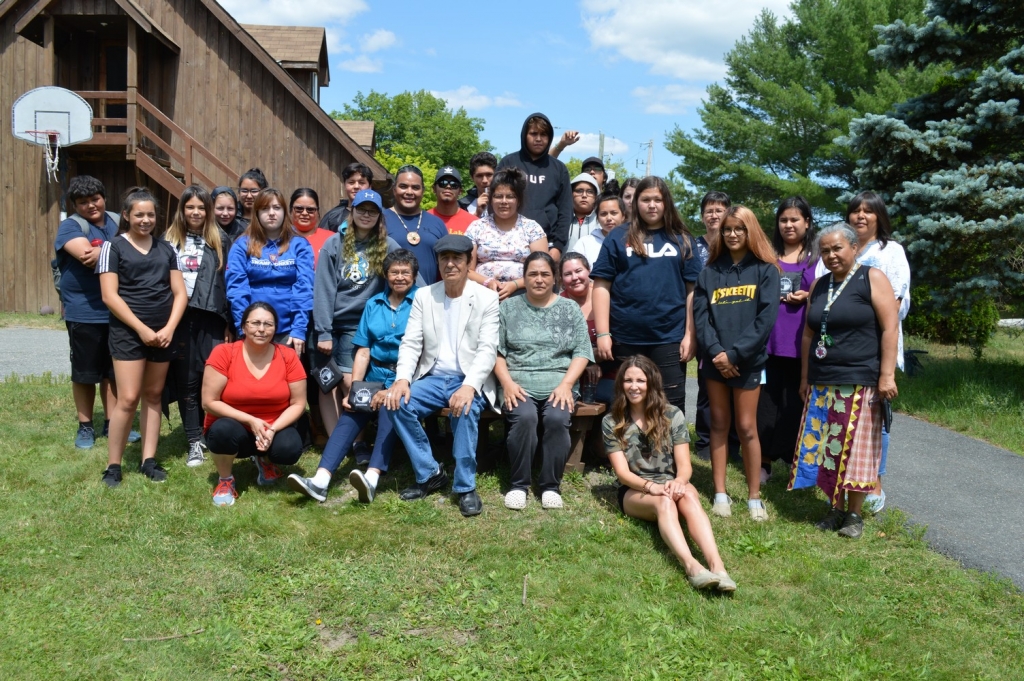 photo by Xavier Kataquapit
The Junior Week of the Wabun Youth Gathering featured traditional teaching, fun and games. Pictured are the participants, organizers, facilitators and volunteers at the Anishinabe Spiritual Center during the event which ran from July 22 to August 2.

The 13th Annual Wabun Youth Gathering was held July 22 to August 2, 2019. The event brought together junior youth aged 11 to 14 during the first week from July 22 to 26 and senior youth aged 15 to 19 from July 29 to August 2. The annual event brings together Indigenous youth from the Wabun Tribal Council First Nations in northeastern Ontario for a two week long gathering that provides educational workshops on culture, heritage, outdoor activities as well as presentations on mental health and wellness. Wabun First Nations are situated primarily near Timmins, Kirkland Lake and Chapleau. This year’s gathering was held at the Anishinabe Spiritual Center in Espanola.

“This year’s gathering has provided an amazing cultural experience for our youth. In addition to learning about their culture and heritage, they also receive education and counselling on important issues such as mental health, depression and addictions. They have received this type of education and encouragement so often that we are now starting to see them providing peer to peer counselling and support with one another,” explained Deanna Heyde, Regional Crisis Coordinator for Wabun Health Services.

Deputy Grand Chief Walter Naveau attended the event during the second week and spoke to youth during a special presentation.

“It is like medicine for the soul when I see our young people interacting with one another and coming together at a gathering like this. It gives us hope to see our young people finding their connection to the land, their culture and their heritage. I also wanted to share with them that we support and encourage every one of them in everything they do,” said Deputy Grand Chief Naveau.

Both weeks were facilitated by Great Lakes Cultural Camps, an Indigenous owned and operated training and teaching company from Wikwemikong First Nation. The company was founded and is led by Maheengun and Bernadette ‘Cookz’ Shawanda. They were assisted by their son Naakwam Shawanda. Great Lakes Cultural Camps provided modern outdoor training in canoe handling and water safety, as well as educational workshops in traditional Native outdoor games, Indigenous song, traditional dance and craftwork. They brought along additional specialists that provided hands on training for canoeing and workshops on the science of traditional Indigenous crafts, tools and building methods.

“We started our small business as a way to teach others about proper canoeing and kayaking methods and safety procedures but also to instill in youth knowledge of traditional culture and ceremonies. It feels great to share this knowledge with our Indigenous youth and to keep them connected to their heritage,” said Maheengun Shawanda.

Bernadette ‘Cookz’ Shawanda also led the youth on both weeks through several workshops and presentations on plants and medicines, cultural teachings, traditional ceremonies, regalia, Pow Wow etiquette and traditional dress. She presented some of her own craft work including a traditionally styled dress that would have appeared a century ago among the Woodland people of northern Ontario and the Great Lakes region.

A special presentation and education workshop was also provided during both weeks by Teddy Syrette, who self identifies as a Queer-Indigenous advocate and artist from Batchewana First Nation. He spoke to youth about issues regarding sexuality, identity, self esteem and acceptance of others who are different in the community.

“I’ve known Teddy personally for many years and she has always been a great speaker and representative in the Native community when it comes to issues of sexuality and identity. Many of our young people are identifying themselves in multiple ways here in the north and it is important that we show them that we all understand and accept everyone, no matter who they are,” said Heyde.

Randi Ray, a citizen of Flying Post FN held a workshop and presentation to youth to encourage them in their education goals, as well as to gather their feedback and input on how to give voice to their needs in the education system in northern Ontario. Ray is an Indigenous representative and advocate who has been involved in many initiatives with post secondary education over the years.

“I’ve been attending this gathering from the beginning and I have watched many of these young people grow over the years. They have become more confident in themselves and more in touch with their heritage and past,” said Elder Hendrix.

“We all look forward to this gathering every year as it is a chance for us to see friends from other communities and meet new ones too. Many of us don’t get a chance to go out of our home community so it is always exciting and fun to go somewhere new where we can be with our friends and learn new things,” said Prince.

Heyde, who was the lead organizer of this year’s event explained that she and the Wabun Health Department are grateful to so many people. Wabun Health Director Jean Lemieux also expressed her thanks to everyone involved.

“We are very thankful to our Elders, chaperones and everyone who assisted in this years event. We are also grateful to Deputy Grand Chief Walter Naveau for attending to address our youth. This annual event is made possible due to the work of so many people at our health office and through the collaboration of our community citizens and especially by our youth who attend and show their enthusiasm every year. It would also not be possible without the support and encouragement of our Wabun Chiefs and our Executive Director Jason Batise,” said Jean Lemieux, Wabun Health Director.

The Wabun Youth Gathering originated through the vision and dream of Wabun Elder Thomas Saunders of Brunswick House FN who lobbied for a youth gathering. Sadly, he passed on before his dream came to be but his legacy lives on.