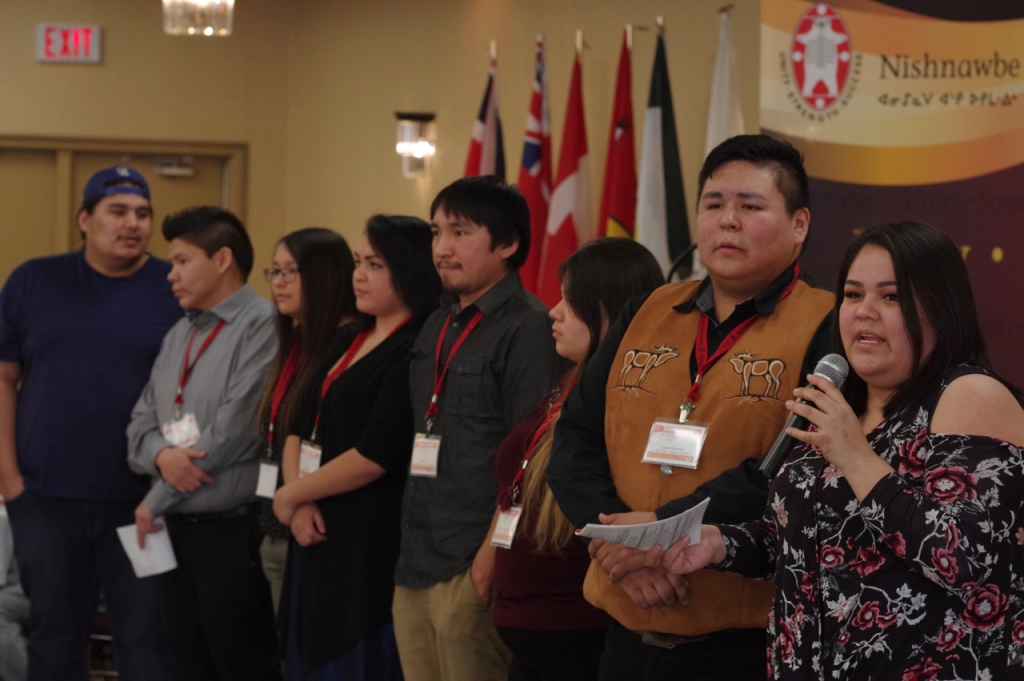 Members of the NAN Oshkaatisak All Young People’s Council speak at the opening of the Nishnawbe Aski Nation To Have Hope Youth Gathering, held Feb. 9-11 in Thunder Bay. Photo by Rick Garrick.

The Nishnawbe Aski Nation To Have Hope Youth Gathering was a success with opportunities for youth to learn about healthy expression, leadership skills and cultural teachings.

“It’s been awesome,” says Ashley Bach, a Mishkeegogamang youth who grew up out west and recently graduated with a Bachelor of Science in Environmental Science degree from McGill University. “It’s been a really good gathering. I’ve done a few workshops every day. Yesterday I made a drum, on Friday I learned about medicines from Elder Tom Chisel.”

Bach says Chisel showed the youth some of the medicines he brought with him to the gathering, which was held Feb. 9-11 at the Best Western Plus Nor’Wester Hotel and Conference Centre near Thunder Bay.

“We got to touch them and look at them and even try some of the medicines, like teas and whatnot, that he has made,” Bach says.

Bach also enjoyed meeting and participating in activities with the other youth at the gathering.

“That’s why I wanted to come to this,” Bach says. “I wanted to meet people from NAN territory, connect with everyone and make friends.”

In addition to a range of breakout sessions on NAN engagement, sacred teachings, youth leadership and expression, the gathering also featured a powwow on the first evening, a Night to Remember Gala on the second evening and a bonfire and dogsledding on the final day.

“Throughout the weekend we had plenty of workshops in regards to culture, art, life promotion and leadership skills,” says Clyde Brandon Moonias, a member of the NAN Oshkaatisak All Young People’s Council. “I feel like we really gave (the youth) the opportunity to express who they are, whether that’s through the culture, through the arts, through the crafts or through the leadership training. Every youth’s experience is going to be different, but in general I feel like we will leave a lasting impression and memories for these youth.”

Moonias says it is important for youth to attend the gathering because it gives them hope.

“We are here to help them grow and learn as young people,” Moonias says.

Elder Teri Fiddler says the young women who attended her Women’s Teachings breakout session on the first day enjoyed her stories and teachings.

“I mostly talked about the power they have as women and the gifts they have as women and and how to use them in a good way,” Fiddler says. “I also told them stories about how I grew up in a traditional way with my parents from
Shoal Lake. I talked about my grandmother, she took over raising me when I was seven-years-old, and I spent a lot of time with her. She taught me how to eat wild food and those kind of teachings.”

Deputy Grand Chief Anna Betty Achneepineskum says about 137 youth from across NAN territory registered for the gathering, which was the third annual youth gathering held since the current NAN executive was elected in 2015.

“Their input is valuable,” Achneepineskum says. “It needs to be part of what we are doing, whether we are talking about resource development, treaty education, child welfare, our children need to be part of it. That is our way of empowering our young people, to ensure that they have a voice.”

“There was a lot of really good workshops on how to inspire hope back in the communities,” Wesley says. “And inspiring hope in the communities is a really simple process, and that is going home and doing something to help other people.”

The Oshkaatisak Council and the Ottawa Youth Delegation also delivered a presentation about their meeting with Prime Minister Justin Trudeau and their work on the NAN Youth Declaration in 2016 on the final day of the gathering.