Whitesand to generate its own electricity 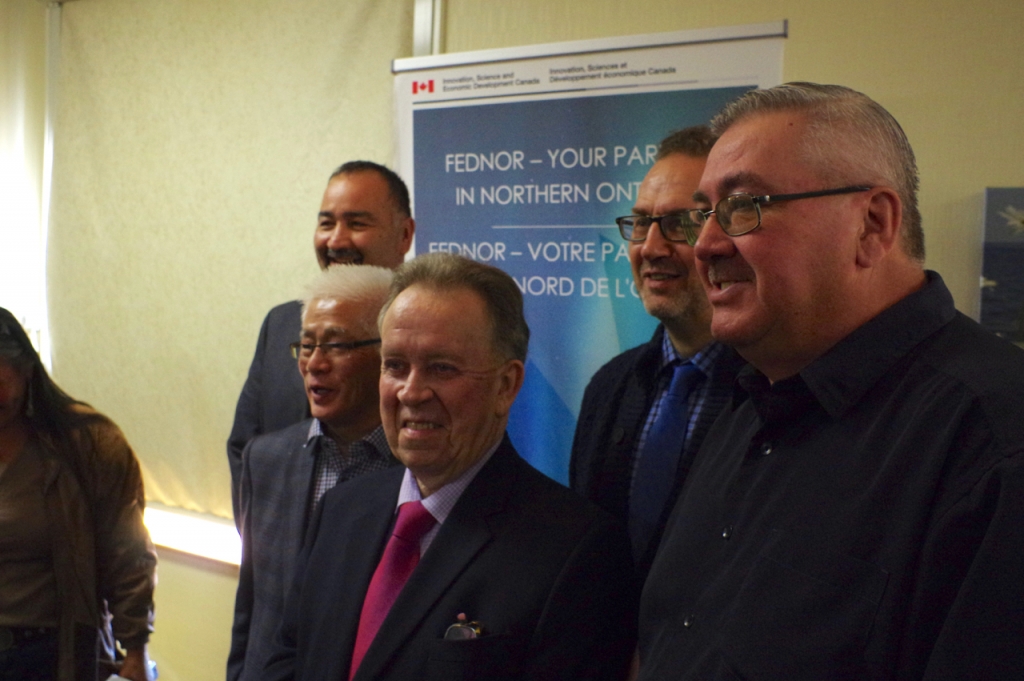 Whitesand looks forward to generating its own electricity thanks to a $3.76 million investment from the federal and provincial governments for an industrial park with biomass and wood processing facilities.

“It’s going to be a huge facility — we are going to be powering Armstrong, Whitesand and Collins,” says Whitesand Chief Allan Gustafson during an Oct. 20 press conference at the Prince Arthur in Thunder Bay. “We are also going to have a (wood fuel) pellet facility to make pellets and put them on the market.”

Whitesand plans to build the Sagatay Cogeneration LP biomass co-generation facility, the Sagatay Wood Pellets LP plant and a wood merchandising yard in the Bio-Energy Centre industrial park, which will be located on Hwy. 527 about one kilometre south of Armstrong.

“The (biomass co-generation) facility is up to 5 MWs — we will have more than enough power,” Gustafson says. “We only need about 1.5 MWs to (power) Whitesand, Armstrong and Collins. Right now we can’t build any more facilities because we can’t add any power to them. So it’s hard on the community.”

The co-generation facility will enable the three communities to get off the diesel-powered electricity they are currently using as they are not connected to the provincial hydro grid.

“We burn about a million litres a year,” Gustafson says. “With this new plant, we will have clean energy and keep the environment clean.”

Whitesand previously negotiated a 20-year renewable agreement for electrical generation to ensure a guaranteed revenue stream and the sustainability of the industrial park project.

“There’s going to be about 64 full-time positions and about 60 seasonal,” Gustafson says.

Gustafson says the community is happy to see the project moving forward after it was first proposed in 1982 by former chief Douglas Sinoway and brought up again about nine years ago.

The co-generation facility will use the bark and limbs of the trees that are harvested for the wood pellet plant to produce energy. The wood pellets will be shipped out to market on the Canadian National railway that runs through the area.

“Humans are taking a toll on the Earth and we need to start moving towards sustainable, green energy in order to correct the balance in the way humanity is going,” says Whitesand Councillor Norman Matinet. “The big reason for us supporting this project is for our future generations. We’re hoping to show all of Ontario, all of Canada and even the rest of the world that if a small, tiny community such as ours can accomplish such a huge project, that we want the rest of Canada and even the rest of the world to know that we can all do this, we can all change this world.”

The project received $1.8 million from Indigenous and Northern Affairs Canada, $949,539 from FedNor and $949,539 from the Northern Ontario Heritage Fund Corporation. Natural Resources Canada previously provided $1.1 million for project planning and pre-development as well as negotiations for the power purchase agreement.

“The government of Canada is proud to invest in strategic initiatives that fuel the economy and accelerate growth in northern Ontario’s Indigenous communities,” says Navdeep Bains, minister of Innovation, Science and Economic
Development and minister responsible for FedNor. “Today’s announcement will help usher in a new era of economic development, energy self-sufficiency and environmental stewardship for the people of the Whitesand First Nation.”

“In addition to eliminating their reliance on diesel power, this project will provide opportunities for business development and growth previously unavailable to the community, and will offer residents good jobs in many sectors including forestry, plant operation and silviculture,” Hajdu says.

Michael Gravelle, minister of Northern Development and Mines and chair of the Northern Ontario Heritage Fund Corporation, says the project will re-invigorate the community.

“We’ve been engaged from almost in the beginning,” Gravelle says. “I’ve been supporting Whitesand First Nation since I first got elected to Parliament in 1995 and we’ve been working for a long time on this project and we are going to continue to stay with them as we move towards implementation.”

Gravelle says there is “tremendous support” from the community for the project.

“This will provide long-lasting employment and it will bring about a great revitalization of the community,” Gravelle says.

NHL RADIO CONTEST, Week 2 Word of the Week is: ki te h ni mo we win (Oji-Cree) or Kistenimetowin (Cree). Ask an Elder for its meaning and submit for a chance to win! Contest details are here: http://www.wawataynews.ca/nhlradiocontest