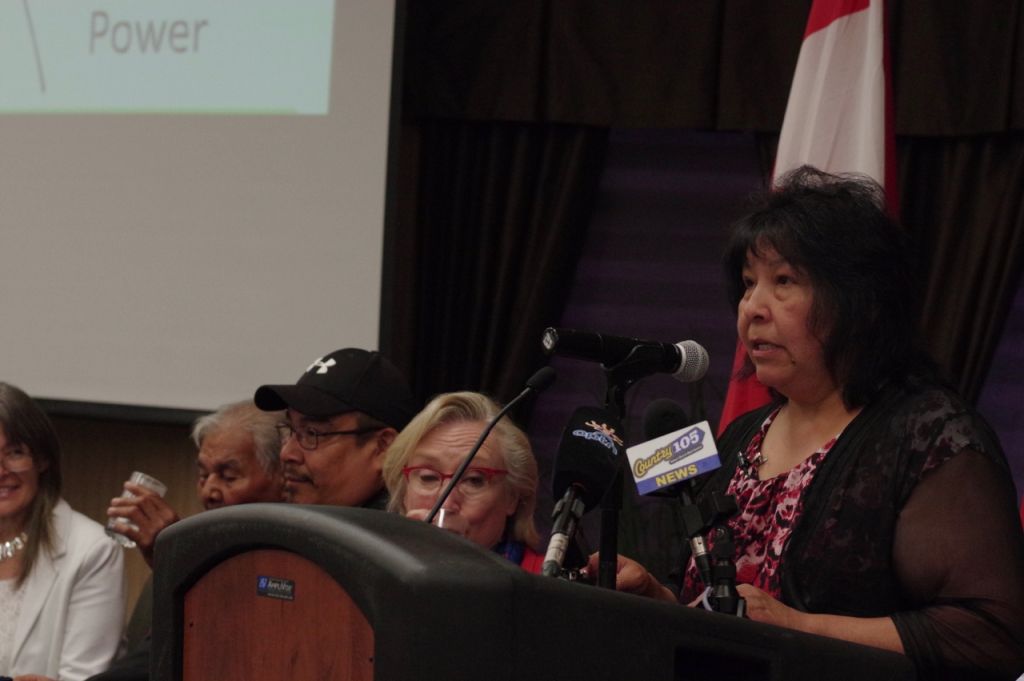 Wataynikaneyap Power CEO Margaret Kenequanash says the 117-kilometre power line project from Red Lake to Pikangikum announced on Aug. 17 will open the door to addressing the energy crisis in remote First Nation communities and the need to connect them to the provincial electrical grid. Photo by Rick Garrick.

The “first step” of the Wataynikaneyap Power line, from Red Lake to Pikangikum, was announced by Indigenous and Northern Affairs Canada Minister Carolyn Bennett on Aug. 17.

“This is about planning for a region as well as for a community,” Bennett says. “This mustn’t be viewed as a one-off initiative; this is about a first step for a region.”

Bennett announced up to $60.2 million in funding for Wataynikaneyap Power, a licensed transmission company equally owned by 22 First Nation communities in partnership with Fortis Inc., to build the 117-kilometre power line with associated infrastructure during a press conference at the Victoria Inn in Thunder Bay.

“This is a first step to a new chapter where they can rely on the power and they can build the kind of hope for their community that is about the future,” Bennett says. “This is something that has been in the works for a very long time. This is out of cycle budget funding that took the finance minister and the prime minister to agree to do.”

Construction on the power line is scheduled to begin in October, with completion expected in November 2018. Pikangikum currently operates a diesel generating station as an Independent Power Authority to provide power for the community of about 2,300 on-reserve citizens.

Owen says the community currently experiences power outages ranging from one-to-three days in duration with the about 38-year-old diesel generating station, which has been operating at capacity since 2010.

“In the back of your mind you are telling yourself this is ridiculous,” Owen says. “Our community, they don’t want to be there, nobody wants to be there during those times (when the power is out). Sometimes a generator will actually have to be pulled out of its unit and transported out to Winnipeg and serviced. During the times when we have less units going, we are told to conserve energy as best as you can. And one of them is don’t cook too much.”

Owen says the community looks forward to being able to expand once the power line is completed.

“We are very hopeful now that we will be able to grow in terms of much needed infrastructure, water and sewer, more housing, a new health centre,” Owen says. “We do have major cleanups that need to be addressed after we’ve shut down our generators.”

Grand Chief Alvin Fiddler says the funding announcement was a “great day” for the community.

“It was a long time coming,” Fiddler says. “What we said though is that it is only the first step — it’s a significant first step for this community in terms of being able to sustain its growth now that they will have adequate power within a year.”

Fiddler says the Wataynikaneyap Power line is designed to significantly reduce the financial burden for First Nations while eliminating the health, safety and environmental impacts associated with diesel.

“It is our hope that Pikangikum will now, with adequate power, be able to plan for the future, whether it is expanding the community, improving their infrastructure to begin to address their housing needs and to ensure they have access to clean, safe drinking water for the whole community,” Fiddler says.

Margaret Kenequanash, CEO of Wataynikaneyap Power, says the power line will open the door to addressing the larger energy crisis and the need to connect other remote First Nation communities to the provincial electrical grid.

Kenequanash says the timeline for completing the phase one 300 kilometre 230 kV transmission line to Pickle Lake to reinforce power supply in the area is 2019 and the timeline to connect 15 phase two communities north of Red Lake and Pickle Lake is 2023.

“Investing to build better-connected electricity systems and promote cleaner, more reliable energy supply in rural and remote communities will help create new opportunities for social and economic development in these communities,” says Jim Carr, minister of Natural Resources. “Our government will invest in projects to reduce reliance on diesel fuel in rural and remote communities across Canada as part of our broader plan to build the low-carbon economy.”

Wataynikaneyap Power was selected by the provincial government in July 2016 to connect 16 remote First Nation communities that rely on diesel power to the provincial electrical grid through about 1,800 kilometres of 230 kV, 115 kV, and 44 kV power lines.