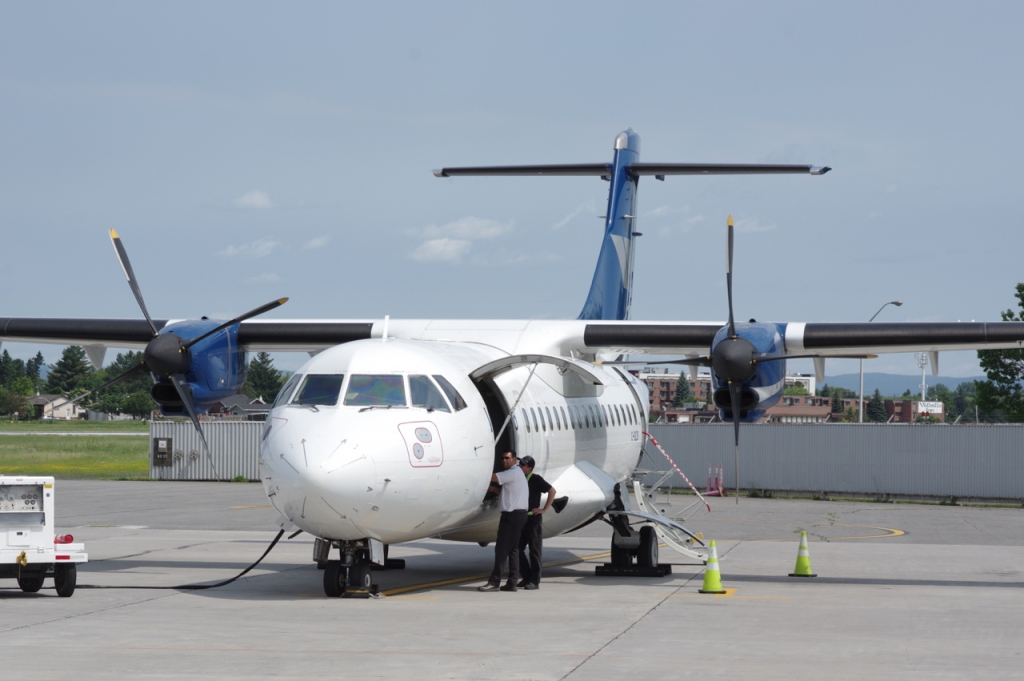 North Star Air is operating a two-engine turboprop ATR 42-300 aircraft for a two-month trial period on a Flex Flight route from Eabametoong, Neskantaga and Webequie to Thunder Bay. The aircraft is leased from West Wind Air in Saskatchewan. Photo by Rick Garrick.

“The flight was good, the seatings were good, everything was good,” says Irene Boyce, from Eabametoong. “You can use the washroom in there too, so yeah, I enjoyed my flight.”

Roy Moonias, from Neskantaga, says it was an “awesome” flight on the ATR 42-300, which is being leased from West Wind Air, a First Nations and employee-owned airline based in Saskatchewan.

“It was very smooth,” Moonias says. “You’ve got more room and it was a good flight. There’s a washroom and they give you snacks, just like any other bigger airlines. It was very nice, very clean.”

North Star Air added the ATR 42-300 to its fleet as part of the company’s overall investment strategy to serve new routes and support the growing needs of communities and customers. In addition to the Flex Flight route to Eabametoong, Neskantaga and Webequie, the ATR 42-300 is also be available for charter flights.

“The addition of the ATR 42 to our fleet is a major milestone allowing us to respond to the evolving market requirements while offering the highest standard of comfort and safety,” says Frank Kelner, president and CEO of North Star Air. “Working with our First Nation strategic partners remains a top priority.”

North Star Air plans to operate the ATR 42-300 on the Flex Flight route to Eabametoong, Neskantaga and Webequie for a two-month trial period, beginning with the first flight on July 14.

“Once we have a couple of months of trying out this specific route, we will evaluate it and see if we can add more flights, keep it longer or add it to the other routes that go up north,” says John Beardy, community relations manager with North Star Air.

Although North Star Air initially planned one flight in the morning for the Flex Flight route, the airline has since added an afternoon flight to the route due to the demand.

“It looks like we’re doing another flight this afternoon,” Beardy says. “That’s just how we manage our passenger services. We call it the Flex Flight network because we cater to the demands of the passengers travelling on that specific
route.”

The ATR 42-300 is designed to carry up to 44 passengers, with four seats across the passenger cabin.

“It has a cabin that you can stand up in, a large cargo area as well,” Beardy says. “It has a washroom and we will have a flight attendant. And also we serve some snacks and beverages. We are always looking for ways to offer our customers more value in our service.”

Beardy says there has been a “very positive” response from the communities about the ATR 42-300 service.

“They like the comfort of spacious seating as well as being able to take in your carry-on,” Beardy says. “There are overhead bins where you can store your carry-on.”

Aircraft bookings are available online at northstarair.ca or through reservations at 1-844-633-6294 ext 3.

North Star Air was founded in 1997 and now provides passenger, charter and cargo services with a fleet of 12 aircraft through bases in Thunder Bay, Sioux Lookout, Pickle Lake and Red Lake.