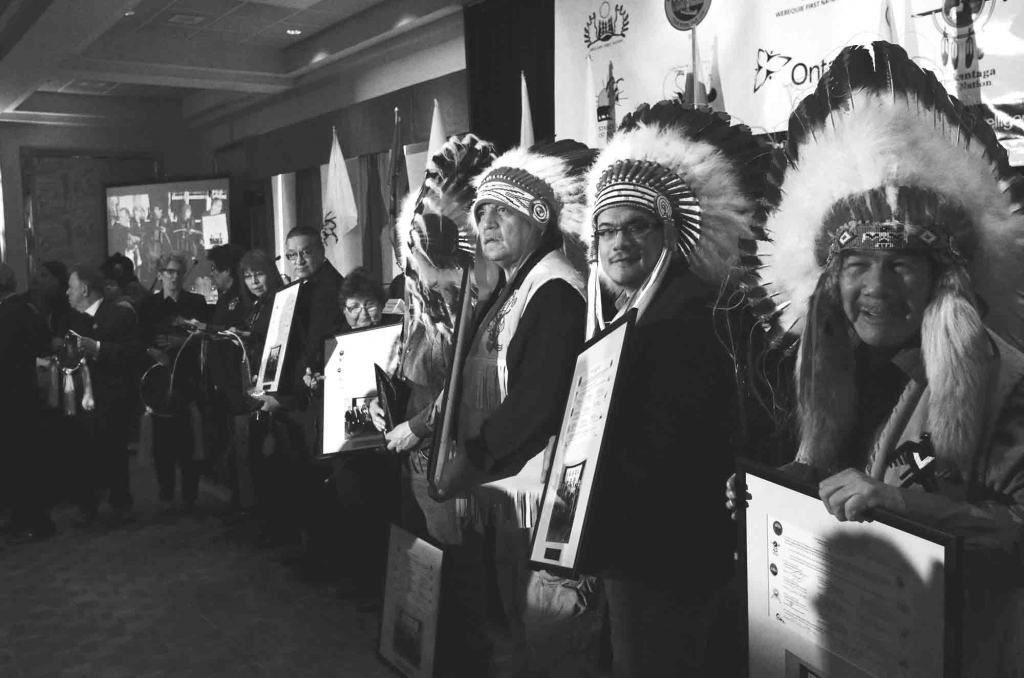 Neskantaga Chief Peter Moonias called for more “meat” on the Ring of Fire regional framework agreement during the April 24 celebration with Premier Kathleen Wynne in Thunder Bay.
“The framework is only a first step,” Moonias said. “We have to put some meat on it. We are the people in Matawa that need to tell (the federal and provincial governments): ‘this is what we need, this is what we want, this is where we want to go.’ That is what we have to do in the next few months, in the next few years, whatever time it takes.”
Moonias said the Matawa chiefs did not sell their traditional lands by signing onto the regional framework agreement on March 26.
“Our people think we are selling the land here — we are not selling the land,” Moonias said, noting that the traditional lands are still important to First Nations people. “The land was taken away from us; we are only taking it back.”
The Matawa chiefs celebrated the regional framework agreement with Wynne, Michael Gravelle, minister of Northern Development and Mines, David Zimmer, minister of Aboriginal Affairs, and Bill Mauro, minister of Municipal Affairs and Housing and a crowd of community members at the Valhalla Inn. A pipe ceremony and drumming and dancing were held during the celebration.
“With this agreement, we have taken an important step forward together – we have adopted a different kind of negotiating process that is based on respect,” Wynne said. “We now have a framework to guide our discussions as we work toward achieving our common goals, and ensuring that everyone benefits from development in the Ring of Fire.”
The regional framework agreement is a first step in the historic, community-based negotiation process that will bring together the nine First Nations and the province of Ontario to discuss and negotiate an approach for development in the First Nations’ traditional territories. The process will help ensure that First Nations participate in, and benefit from, Ring of Fire developments.
“Since the discovery of the deposits at Wawangajing (Ring of Fire), there have been many premature initiatives, from the continuing, and much-maligned, railroad corridor, to the proposed slurry pipelines through the muskeg sponge,” said Marten Falls Chief Eli K.
Moonias.
“Our two winter protests, which highlighted the lack of consultation, were designed to slow down the ideas and take stock in reality. The MOU (memorandum of understanding) our First Nation has with Ontario is aimed at achieving involvement with the individual (First Nation), and the regional framework is an extension of that effort to include others in the surrounding proposed development area.”
Eli Moonias said many MOUs, frameworks and other agreements have come and gone since the Ring of Fire mineral deposits were discovered, including the dismantling of the Indian Commission of Ontario in 2005 by Indian and Northern Affairs Canada.
“Currently there is no instrument to conduct tri-level talks, but there is no question about the need for trilateral discussions for development in the Ring of Fire,” Eli Moonias said. “I believe our local MOU and the regional framework provide the window for that.”
The regional framework agreement ensures First Nations and Ontario can work together on resource development opportunities, including long-term, regional environmental monitoring; enhanced participation in environmental assessment processes; resource revenue sharing; social and economic supports; and regional and community infrastructure.
“This regional framework agreement is a tremendous achievement that represents a significant step forward in our community-based regional negotiation process,” Gravelle said. “I am incredibly proud that our collaborative work with Matawa-member First Nations continues to progress and we continue to make important advancements on regional, environmental and economic developments.”
Although Aroland Chief Sonny Gagnon said the regional framework agreement demonstrates the Matawa communities are open for sustainable development, he also called for more information about potential impacts from development.
“We need to know what are the impacts of this development, today, tomorrow, 100 years down the line,” Gagnon said. “We need to know that and to understand the language that these people bring. I signed it, but then again I’m very cautious. To move forward, we have to understand what we’re getting into, because when the mines are cold and have gone, we will still be here.”
Gagnon wants to seek further direction from his community on which path to take in the future.
“We need to talk, we need to get direction from our community groups, our pillar groups, the youth and the Elders,” Gagnon said. “The day has just begun; we need to do a lot of work to get what we want. It’s sad to see that we are still on boil water (orders), we still have children that are lacking in education. They’re about two or three grades behind. This can’t go on. Our health and our social problems — this can’t go on. All these need to be studied.”
The Ring of Fire, located about 540 kilometres northeast of Thunder Bay in the Hudson Bay lowlands, contains about $60 billion in known minerals, including the largest deposit of chromite ever discovered in North America. Chromite is a key ingredient of stainless steel.