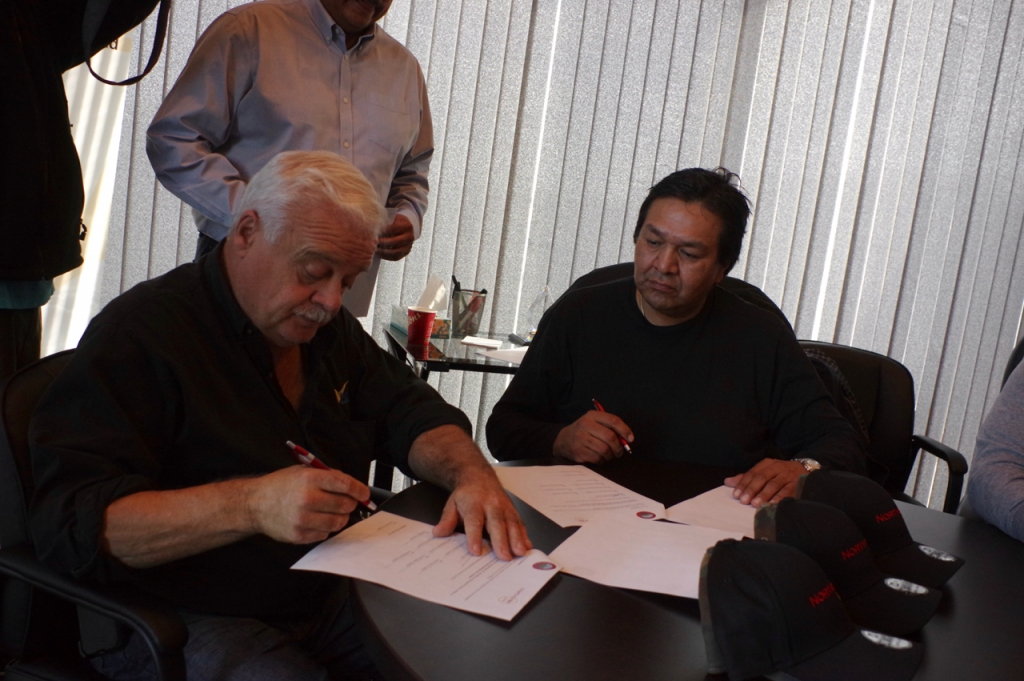 Marten Falls is looking to benefit from increased service to the community and better comfort on flights through a strategic business agreement with North Star Air.

Achneepineskum and North Star Air president and CEO Frank Kelner signed the agreement, which includes a revenue sharing agreement and the introduction of flights between Thunder Bay and Marten Falls beginning on Oct. 16, on Sept. 27 at the North Star Air office building in Thunder Bay.

“We stay very focused on what the First Nations want — service, safety and all the projects they may have,” Kelner says. “We want to be there for them and we want to be very supportive for their success.”

“We’ve been getting tremendous satisfaction with the communities,” Kelner says. “It is allowing us to bring in bigger airplanes which they have never seen before in the north, especially for the passenger services. It is something we are going to grow on as well, the passenger services, and still stay as good as we always did in the freight business. The freight business is a big thing for us, and that is what we do best, because that is what they need. They need a one-stop shop — they need a place where they can go to and rely on the airline to do anything they want to do, from every level of air transportation.”

North Star Air brought in an ATR 42-300 two-engine turbo-prop aircraft on a two-month trial basis this past summer for a Flex Flight route from Eabametoong, Neskantaga and Webequie to Thunder Bay.

“The reaction has been outstanding with that aircraft,” Kelner says. “The people really feel safe. They feel that it is the ultimate way to travel — it has a flight attendant on board and it can carry over 40 passengers.”

Kelner says North Star Air is currently using a Dash 8 aircraft until it brings in an ATR 72-500 twin-engine turbo-prop regional aircraft in about three-to-four months.

“This (ATR 72) aircraft can carry over 80 passengers,” Kelner says. “However, it is going to be configured around 50 seats with unlimited baggage. There will be no such thing as leaving baggage behind — that’s been the biggest issue on the First Nations.”

Kelner says the ATR 72-500 is a beautiful aircraft.

“We’ve got some configured into cargo and we are going to be using that in the high Arctic for the longer flights,” Kelner says. “But at the same time we chose the (ATR) 72 for passengers, because everything will be the same as far as parts.”

The North West Company purchased North Star Air this past summer for $31 million plus closing expenses.

“They (North West Company) allow me to focus on giving better services, not just in freight, but in every environment that we can do for the First Nations,” Kelner says.

Achneepineskum says his community is pleased to be working with an established and reliable carrier as air transportation is essential for economic growth and quality of life.

“One good thing is we are going to have a direct flight from Marten Falls to Thunder Bay,” Achneepineskum says, “in a very comfortable aircraft.”