US and THEM film screens in Thunder Bay 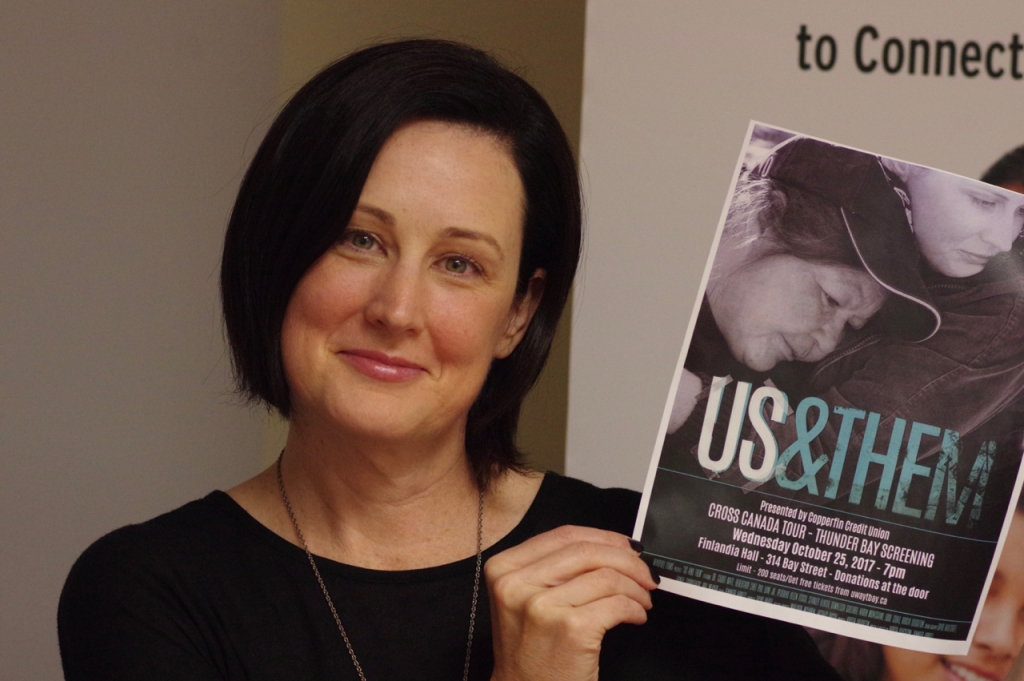 US and THEM film director Krista Loughton screened her film about four homeless people and her relationship with them over 10 years on Oct. 25 at the Finlandia Hall in Thunder Bay. Photo by: Rick Garrick.

US and THEM film director Krista Loughton was surprised with the response to her film’s screening on Oct. 25 at the Finlandia Hall in Thunder Bay.

“I’m a little bit shocked at the state of the situation in terms of homelessness and the deaths in Thunder Bay,” Loughton says after the screening’s question-and-answer session. “The word of the night is shocking, because it is a gateway city to the north. There are so many people to support here.”

Loughton plans to include Thunder Bay in her next film project, which will be focused on Indigenous homelessness.

“How can I not include Thunder Bay in that movie,” Loughton says. “What would I do — I don’t know yet. I would probably try to find a homeless youth on the street, somebody to connect with, someone to follow and find out what is your situation, what happened to you, what is available to you, how can we help you.”

Loughton says it is important to create intimate portraits of the people featured in a film to make the film work.

“(It’s) like what I did with the four (people) in US and THEM,” Loughton says, noting that Jesse Thistle, a Metis PhD candidate at York University who was addicted and homeless in his 20s and just released the Definition of Indigenous Homelessness in Canada, will be involved in the film project. “He’ll guide us through the oppression and all the systems that keep people in this place of intergenerational trauma and I’d say intergenerational poverty and lack of access to any way out of that poverty.”

Loughton created the US and THEM film along with filmmaker Jennifer Abbott to bring attention to the issue of homelessness and addiction. She focused on the stories of four homeless people over a 10-year period.

“The story is about my personal experience befriending four chronically homeless people,” Loughton says. “I set out to help them and they end up helping me.”

Loughton says after one of the homeless people passes away, she realizes she needs help and approaches addiction expert Gabor Maté for assistance.

“And he turns it around on me and basically says: ‘What is your experience of pain that you need to relieve it in the world,’” Loughton says. “And then my emotional stuff comes up on camera. But it’s my three remaining street friends who counsel me on how to get through that.”

The US and THEM screening was presented by Copperfin Credit Union in partnership with United Way of Thunder Bay and the Lakehead Social Planning Council.

“The one thing with the film that we wanted to be able to show, and I think it was done, is the story of homelessness is complex,” says Jered Zieroth, executive director of the United Way of Thunder Bay. “It’s complicated, it’s difficult, but the accomplishment is these are real people, they have real stories and they are real people whose lives get transformed.”

Community citizens Pia Erkkila and Janet Napash enjoyed the opportunity to learn more about homelessness by watching the film and listening to the question-and-answer session afterwards with Loughton.

“The film (highlighted) a lot of important areas that have not been addressed,” Erkkila says. “I think it would be very beneficial for a lot of individuals to see it.”

“It was a window of opportunity to learn about people and how people can fall victim of some of the things that have happened in their life,” Napash says. “And continue to be a victim until they realize that they can make a change in their life given the proper opportunity to get out of homelessness.”

NHL RADIO CONTEST: Week 3, follow the link to discover the Word of the Week and enter for a change to win a trip to Toronto to see a Leafs game! http://www.wawataynews.ca/breaking-news/new-bridge-provide-year-round-ro...