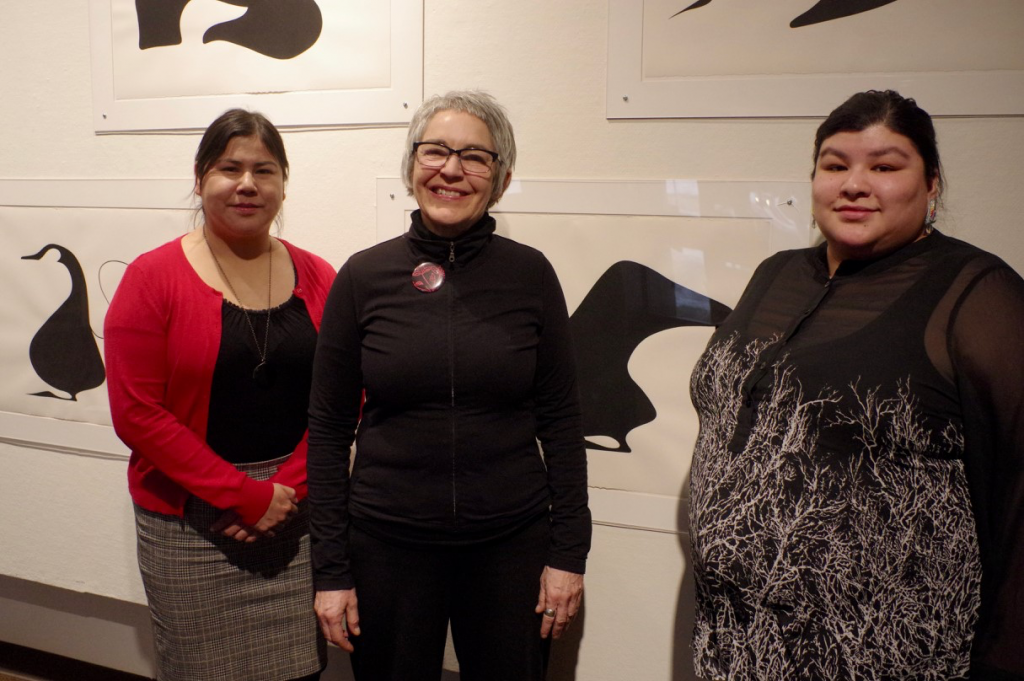 Thunder Bay art Gallery staff members Betty Carpick and Caitlyn Bird met with Regina Mandamin, manager of Indigenous relations and inclusion at the City of Thunder Bay, left, during the launch of the Ode’imin - Art Experiences for the Young at Heart series on Jan. 14.

The Thunder Bay Art Gallery launched Ode’imin - Art Experiences for the Young at Heart, a free and accessible guided tour and workshop series for Indigenous seniors and older adults, on Jan. 14.

“It’s an initiative to create excitement and support gallery visits and workshops by Indigenous seniors in our community,” says Betty Carpick, public programming coordinator at the Thunder Bay Art Gallery. “We’ll be doing some of the work at the gallery and we’ll also visit people off site as well. The idea behind it is to strengthen ties within the community and to build relationships and have some fun, because art making is a joyful experience. We’ll be making things and having conversations about the art, so it’s very much a sharing.”

Carpick says Ode’imin means strawberry or heart berry in Anishinabemowin. The strawberry carries many teachings through its use as a food and medicine in Indigenous culture.

“We like the idea of the strawberry,” Carpick says. “So we’re kind of playing on that idea of making kind of heartfelt and authentic experiences.”

Carpick says the goal is to work with organizations in the city that are already working with Indigenous seniors.

“So we’re relying on those partnerships to build this program,” Carpick says. “We’re hoping that Fort William First Nation and the City of Thunder Bay and others will work with us to enhance these experiences.”

“Wonderful stories about the art can emerge when Elders are able to visit the exhibitions,” Godwin says. “Creating opportunities for older adults to share those memories and experience new things is at the heart of this program. We hope community groups will participate in this special opportunity.”

The Ode’imin series is scheduled to run from January to the end of March through funding from the Ontario Ministry for Seniors and Accessibility.

“We’ll be offering guided tours of the current exhibits and then the art will be tied to the themes of the exhibits,” Carpick says. “It’s all integrated and it’s all intended to be accessible in terms of ability and as well to be sort of a gentle way to appreciate art and to listen to each other.”

Carpcik says there has been a good response to the Ode’imin series so far.

“Everyone is excited,” Carpick says. “They think it’s great.”

The Thunder Bay Art Gallery currently has two exhibitions on display, the Benjamin Chee Chee: Life and Legacy which is on until Feb. 23 and the North Now: Northern Ontario Juried Exhibition, which is on display until Feb. 15.

“(Chee Chee) is really known for his iconic Canadian Geese,” Carpick says. “(The North Now exhibition features) emerging and established artists working in all different media. The Thunder Bay Art Gallery’s focus is on contemporary Indigenous artworks plus the artworks of people from northwestern Ontario.”

Caitlyn Bird, the Ode’imin assistant mentee, looks forward to working with the Indigenous seniors during the Ode’imin series.

“Especially with Indigenous Elders, we hold them in high regard and we treat them with respect,” Bird says. “So I’m really honoured to be able to provide this opportunity for them and to engage and learn from them.”