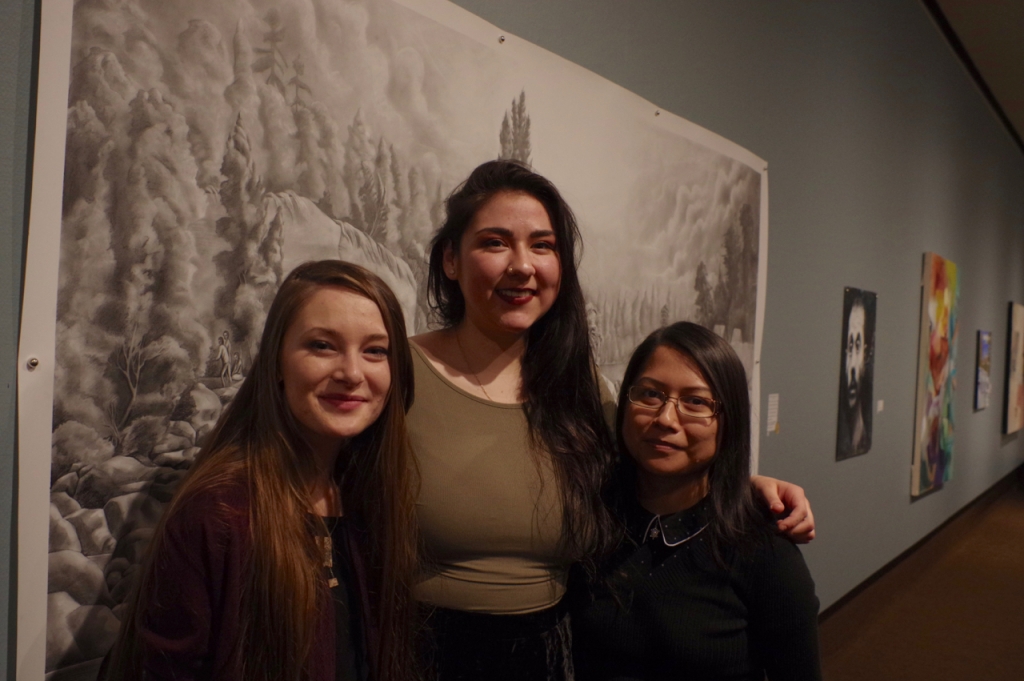 Couchiching’s Mary McPherson received seven awards during the March 9 Opening Reception and Awards presentation, including multiple awards for her Scene of My Elders Emerging from an Inauthentic Past art piece.

“Scene of My Elders Emerging from an Inauthentic Past is me, my father, my grandfather and my great grandmother on an amalgamation of two Paul Kane paintings,” McPherson says. “I chose the Paul Kane paintings because they kind of display these romanticized stereotypes of who we are and these perceptions that kind of really impact us and our identities. I wanted to really disrupt that and show that through the generations things have happened to us and continue to happen to us and show my family really disturbing that perception of who we are, (those) really stereotypical and demeaning perceptions.”

McPherson adds that her art piece features her and her relatives all holding a document that was significant for them.

“I have my great grandmother holding Treaty #3 because she was at the treaty signing and my grandfather holding a passbook because the Indian agent would control when he could leave the reserve and my dad holding a Lakehead (University) degree, and it says degree in being civilized because it wasn’t long ago when you could become enfranchised, you could lose your status, by attending university,” McPherson says. “And me holding my status card saying this status is like stuck to us now, this perception, this government ID is stuck to us, (and) we can’t get rid of it.”

“My art is personal,” Atlookan says. “It has to do a lot with my own experience and the people that are in my life and were in my life. So with my embroidery work that you see when you walk in (the art gallery), that is a self portrait of the disease, Lupus, that I have.”

Atlookan’s charcoal portrait of her late grandmother, Goo Goo, was recognized with one of her awards.

“It’s part of a series,” Atlookan says. “I’m doing six drawings and she is the third that I drew. It’s about the women who are influential in my life.”

Atlookan says she uses her art as a healing tool.

“Because it’s so hard to talk about other things like intergenerational trauma and other issues, it’s like I can talk through my art,” Atlookan says. “It’s a voice, it’s my voice.”

Aroland’s Shelby Gagnon received one award for her art during the awards presentation.

“What my painting is about is mind through media,” Gagnon says. “It’s pretty much how the mind perceives things through social media and how everyone kind of has a different perspective of it and how it affects how you see different things.”

All three artists are involved with Definitely Superior Art Gallery’s Neechee Studio, which provides a free space for Indigenous and other youth to create art in an inclusive environment.

“We’ve been around for five years,” says Atlookan, co-founder and coordinator for Neechee Studio. “They inspired me, they motivated me to go back to high school and come to art school.”

Louise Thomas, owner of Ahnisnabae Art Gallery and a member of the board for the Thunder Bay Art Gallery, presented the Roy Thomas Family Award to McPherson.

“She has amazing talent,” Thomas says. “So I can see her going real places with her art.”