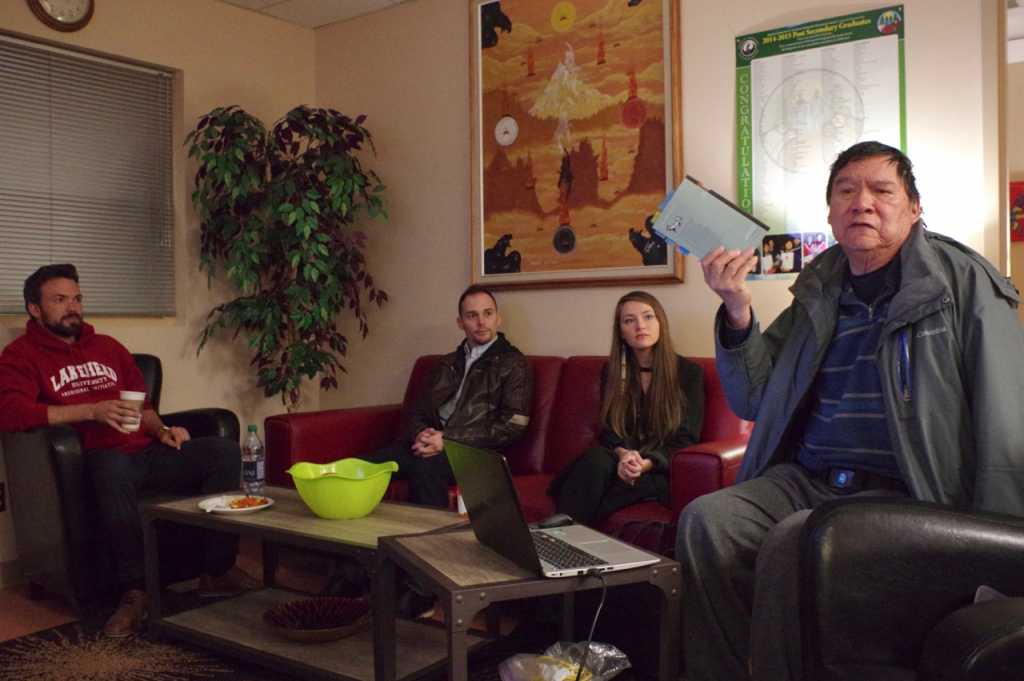 Lac Seul writer George Kenny, a masters of environmental studies: archeology student, shared information on pictographs, Anishinabemowin place names, his book Indians Don’t Cry and a film based on one of his poems during an Oct. 26 Transitions Workshop at Lakehead University's Aboriginal Student Lounge. Photo by: Rick Garrick.

“The Lac Seul Anishinabe believed in a spirit-filled universe full of magic and the supernatural, including the existence of little hairy people who lived in rocks and caves,” says the Lakehead University masters of environmental studies: archeology student. “They were called Memagkwayshewuk.”

Kenny also screened a photograph of a Lac Seul citizen looking at a pictograph of a Memagkwayshewuk during the workshop at the Aboriginal Student Lounge.

“Some of you, if you study the history of the area, may know of or have heard of pictographs,” Kenny says. “They are paintings on rock walls made of red ochre paint and a mixture of eggs and different greases and charcoal from fires.”

Kenny says anthropologists have not determined why pictographs were created, but he has developed a theory based on the vision quest ceremonies in his home territory.

“I think that is what those pictographs are, the results of visions and dreams from people seeking their adult name,” Kenny says. “My father had a 10-day vision quest on an island — 10 days without food. He had to drink water to
survive, but 10 days without food. So he had all these dreams and visions about Lac Seul.”

Kenny then described two Manitou pictographs that are located in the Lac Seul area.

“In this one there is a sun walking across the sky,” Kenny says. “There’s his rays of power and sunlight coming off of him.”

Kenny also spoke about his book of poetry and stories, Indians Don’t Cry, which was published in 1977.

“Over many years it sold over three million copies in Europe,” Kenny says. “It’s been translated into five languages so far.”

“I’m still poor today because I didn’t keep the copyright,” Kenny says. “If any of you ever write a book, don’t sell the copyright — keep it for yourself.”

Kenny also spoke about the latest edition of the book, Indians Don’t Cry: Gaawin Mawisiiwag Anishinaabeg, which he worked on with editor Renate Eigenbrod, who wrote the afterword, and translator Patricia M. Ningewance, an
Anishinabemowin translator and book publisher from Lac Seul.

“My son and I are writing a sequel to Indians Don’t Cry,” Kenny says. “The sequel is called Indians Do Cry.”

Kenny also shared his writing process with the students during the workshop.

“When I write, it comes from my memories and it flows from my brain, my thoughts, into the pencil I am holding on a piece of paper,” Kenny says.

“Most of the poems in Indians Don’t Cry and most of the short stories are based on memories of people I’ve known all my life,” Kenny says. “And there’s even poems that I’ve written about my pets over the years.”

Kenny also spoke about the Anishinabemowin place names for many of the rivers, lakes and communities in northwestern Ontario during the workshop.

“Obishikokaang — that means the place of white pines and refers to Lac Seul, the lake where I was born and raised,” Kenny says.

NHL RADIO CONTEST: Week 3, follow the link to discover the Word of the Week and enter for a change to win a trip to Toronto to see a Leafs game! http://www.wawataynews.ca/arts-entertainment/us-and-them-film-screens-th...