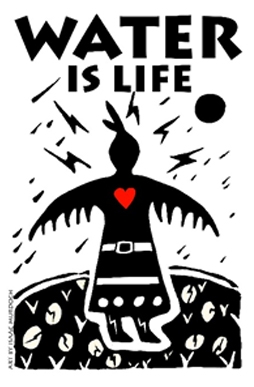 A shared retrospective exhibition between Indigenous artists Christi Belcourt and Isaac Murdoch — Uprising The Power of Mother Earth — will be featured at the Thunder Bay Art Gallery from June 22-Nov. 25.

“The pieces in there all speak to the need for us as Indigenous people everywhere to mobilize and protect the land,” says Belcourt, a Michif (Métis) visual artist and lead coordinator of the Walking With Our Sisters project. “Our ancestors have known for a long time that the earth itself is alive and that there are spirits in everything. The only way we have ever survived is to honour those spirits and to recognize and make our offerings to them, and that formula has worked for our people for 20,000 years.”

Murdoch is an Anishinabek storyteller and traditional knowledge holder from Serpent River.

“What we see now is a massive threat to life on earth through global warming and climate change,” Belcourt says. “Indigenous people have knowledge, traditional knowledge and wisdom that (was) passed down through generations, that could be of a real benefit for the rest of the world.”

Belcourt says this is the first retrospective of her work.

“Most of the really large pieces that I have ever done in my life are all going to be there,” Belmore says, noting that some of the pieces are 12 to 14-feet in length. “It will be the first time they have ever been together in one place.”
Belcourt says her most recent piece — The Revolution of Love — will also be featured in the retrospective.

“(It) is about water and the sacredness of water and the Indigenous peoples rising up to protect the water in a ceremonial way,” Belcourt says. “I’ve just finished that and it has never been shown anywhere. It is 15-feet long. The pieces are quite big and some of the ones that have floral with dots have upwards of 250,000 dots on the canvas.”

Belcourt says she was raised with beadwork and smoked tan hides around her but didn’t do any beadwork until later in life when an aunt gifted her a pair of beaded mukluks.

“I thought: ‘Hey, those were really pretty, I should just paint those,’” Belcourt says. “So I started painting the flowers and I realized I didn’t know enough about beadwork to really be painting it. So then I started to really look at it and I started to teach myself how to bead so I could really understand it.”

Belcourt says she also realized she didn’t know enough about plants to paint them so she studied them for the next 10 years.

“(I) was trying to understand them, trying to find out what they were called, find out more about them and the relationship between plants and the land, the insects, ourselves, the water,” Belcourt says.

Sharon Godwin, director of the Thunder Bay Art Gallery, says Belcourt’s work is about the land and water.

“Christi is an activist,” Godwin says. “Through her work, I think we’ll inspire people to take some action around environmental issues. That is her hope, and that is why, especially in the last few years, why she has been producing the work that she does. She is very interested and obviously worried about our environment and wants people to take a stand and take some action around it.”

Godwin adds that the exhibition will fill all three galleries for five months.

“We’re completely filling our whole gallery with her work,” Godwin says. “We’ve never had a show that took up the entire space for that long. So we want people to come from far and wide.”

Belcourt and Murdoch are also scheduled to do a two-day art build during the week after the opening.