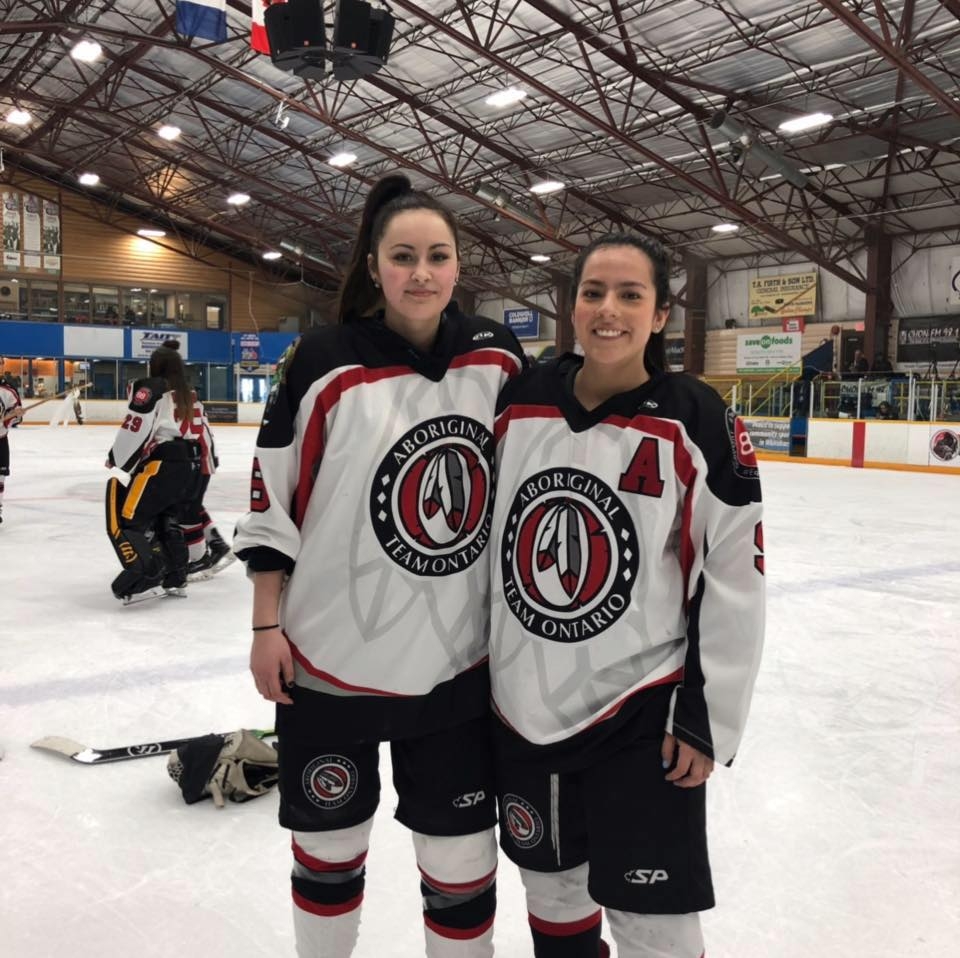 Two Indigenous youth from Northern Ontario were selected to compete in the 2019 National Aboriginal Hockey Championships (NAHC) held this past May in Whitehorse, Yukon. Kira Tangie, a citizen of Brunswick House First Nation (FN) and Tanner Flood from Matachewan FN joined more than 400 elite Indigenous hockey players from across Canada to compete in the week long event.

Tangie, 16 years of age, competed as a member of the female division for Team Ontario while Flood, who is 17 played in the male division for Ontario. Tangie’s Team Ontario placed third with a bronze medal showing while although Flood’s team did not place in the top three, he was selected as the Player of the Game for one of the games he played.

Eighteen teams representing every region of the country took part in the NAHC, which ran from May 6 until May 12 at the Canada Games Centre and Takhini Arena, in Whitehorse. Midget and bantam aged players participated on female and male teams representing the regions of: Alberta, Atlantic, British Columbia, Eastern Door & North, Manitoba, New Brunswick, North, Ontario and Saskatchewan.

Both Tangie and Flood put forth a great effort to compete in the event which required a flight from southern Ontario to Halifax, Nova Scotia to pick up the eastern teams and then a continued flight to Whitehorse in far northwestern Canada.

“This was my second time playing in this event. I also competed last year when it was held in Nova Scotia but this time, it was more complicated to get to our destination and we flew across the country from Ottawa to Halifax and then to Whitehorse,” commented Tangie.

Flood noted that he had started his hockey path in British Columbia when he was very young and this opportunity resulted in his renewing old friendships with some team mates from those early days.

“I enjoyed seeing old friends and making many new ones. I was very honoured to have been selected as MVP for the third game as the calibre of hockey was very high. This was an opportunity to be noticed at a high level and I am hoping it will help with my aspirations for my goals in this sport,” explained Flood.

He and Tangie have been playing on rep teams since they were young and they have been encouraged and assisted by their parents from the start.

Tanner Flood’s father, David, who is a professional involved in forestry business development and his wife Tammy, an award winning body builder, have dedicated a lot of time, effort and financial investment to assist Tanner on his hockey journey. Tanner Flood has had much encouragement, support and advice from his brother Tristan who also played rep hockey. The family started on the hockey trail with Tanner when he was a child in British Columbia, then they moved to New Liskeard where he played for the New Liskeard Puck Hounds for seven years. He was selected to join the North Bay Trappers and for a year the family travelled back and forth from New Liskeard to North Bay and then they made the decision to move to the city to take full advantage of the opportunities in hockey. He also participated over the years in the Little Native Hockey League (Little NHL) tournaments.

Tangie was also supported at every step of her development in the sport by her father Chad and mother, Heidi. She fell in love with the sport as a child and has consistently played rep hockey on mixed teams and then in women’s teams. She has excelled in the sport as a member of the Soo Midget A Wildcats in Sault Ste. Marie and this year is playing for Soo Jr Greyhounds Girls Hockey. In addition she was also noticed and selected by ‘Hit The Ice’ television program, hosted on the Aboriginal Peoples Television Network (APTN), to participate in the show which was based on a hockey training camp. She was involved in the production and film shoot for a month during the summer of 2018 where she made many new friends and met members of Team Canada’s women hockey coaches and some of the players.

“It was great to be involved in these two years of high level hockey with the NAHC events and to be part of a major APTN film production. I learned so much and I understand what an honour it is to stand as a role model for young First Nation women and in particular for those who come from my home community of Brunswick House FN. My First Nation has been supporting and encouraging my efforts in hockey through the years and I am so thankful for that,” explained Tangie.

She gave thanks to her grandmother Christine Venedam , her sisters Taylor, Avery and brother Tyson for their support and encouragement. She has hopes of moving on with her hockey efforts and to play at the highest level possible and obtain a scholarship for education at one point.

Tanner Flood is hoping for a position with a major junior A team and would like the opportunity to play at a higher level in Toronto area. He is currently considering his options and offers that are before him. He considers his family the main contributors to his success so far in the sport and he has high praise for many who have helped him on his way.

“There are so many people that have helped me hone my hockey skills like Mike Stockfish and Guy Blanchard who were such great influences on myself my team mates in North Bay. I also want to thank my dad and my mom for sacrificing so much time and even moving to the city of North Bay to help me with my hockey goals. No matter what I achieve at whatever level in hockey, I can always be grateful for their guidance in keeping me active and involved in such a positive world of hockey and I know that it has helped me become a better person, improved my discipline and provided me with a wonderful learning experience,” explained Tanner Flood.

He also pointed out that he was assisted by an online training program provided by Dr. Craig Slaunwhite, in putting together off ice training plans that have contributed to his game. Slaunwhite is a professional fitness trainer who works with the Winnipeg Jets hockey team.

“I am amazed when I think about it just how many people I respect and thank for running our hockey associations, organizing tournaments and games. It has also been so great to have been assisted by Matachewan First Nation, my home community through the years. I hope in some way any success I manage demonstrates to other First Nation youth that they can achieve their dreams and do great things,” commented Tanner Flood.