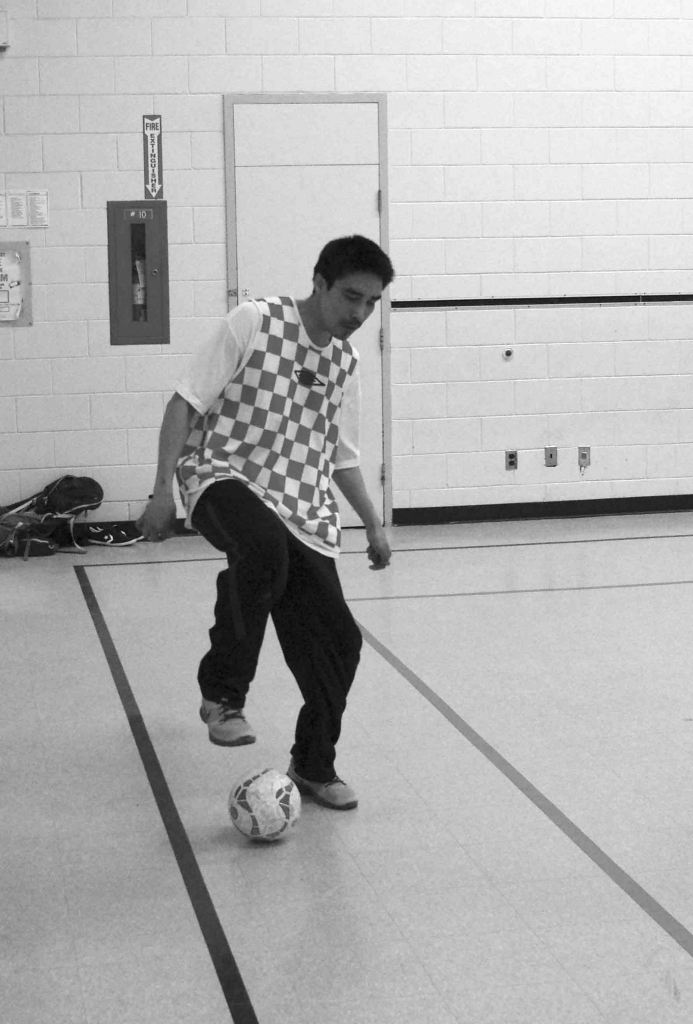 A group of Thunder Bay’s homeless soccer players are practicing on Thursday evenings for an opportunity to play in the Canada Cup Tournament from May 28-31.
“It’s good exercise for me,” said Kitchenuhmaykoosib Inninuwug’s Derek Redsky. “It’s a positive activity they’re trying to do. I encourage more people to come out and play. It’s street soccer, it’s recreational and it’s good exercise.”
Redsky said about four homeless people usually show up to play on Thursdays with a group of volunteers, but he has seen up to eight homeless players on some days.
“The most people we’ve ever had was seven to eight; we average about four,” Redsky said. “I used to live (at Shelter House) about a year-and-a-half ago, so I know most of them.”
The Canada Cup Tournament, taking place at Kinsmen Field in North Vancouver, is the first national tournament to be held in Canada. In the past, street soccer teams participated in regional tournaments to pick players to represent Team Canada at the Homeless World Cup.
“We’re trying to organize a team for the Homeless World Cup,” Redsky said. “It’s world-wide apparently; it’s pretty big.”
This year local organizers and Street Soccer Canada officials will be scouting players at the national tournament for the national team, which will represent Canada at the 2014 Homeless World Cup in Chile.
Big Grassy River’s Alexander Andy enjoys playing with the other soccer players.
“I’m playing with people who are probably as good as me or better than me,” Andy said. “I’m really competitive and I like to win.”
Andy said soccer was always his favourite sport when he was growing up, noting he used to play soccer in Rainy River.
“I wish I could have pursued this when I was in high school,” Andy said. “My dream was to play with Team Ontario.”
In addition, Andy also attends events at other youth centres. He uses the weekly practice sessions as a way to keep away from drugs and alcohol.
“When I came here to Thunder Bay, I was supposed to quit drugs and alcohol, but then for a couple of years it got worse,” Andy said. “I’m trying to do better for myself because I have a second kid coming on the way.”
Andy’s partner, Natasha Mamakeesic, from Sandy Lake, enjoyed her first game with the other homeless soccer players on April 24.
“I think I’m going to come back here every Thursday,” Mamakeesic said “It’s fun; I like it.”
Ken Miller, project coordinator at Shelter House Thunder Bay and organizer of the weekly homeless soccer practices, said the turnout has ranged from between three to about 15 homeless people since the practices began in January.
“There are a couple of people who said they really enjoy being a part of this,” Miller said. “They get to meet with their friends and just have a good time and forget about whatever.”
Miller recalls one woman who came out for the first practice in January but was hesitant to play.
“But by the end of the practice, she was up there,” Miller said. “She was kicking the ball around and she was laughing her head off. She was just having a great time.”