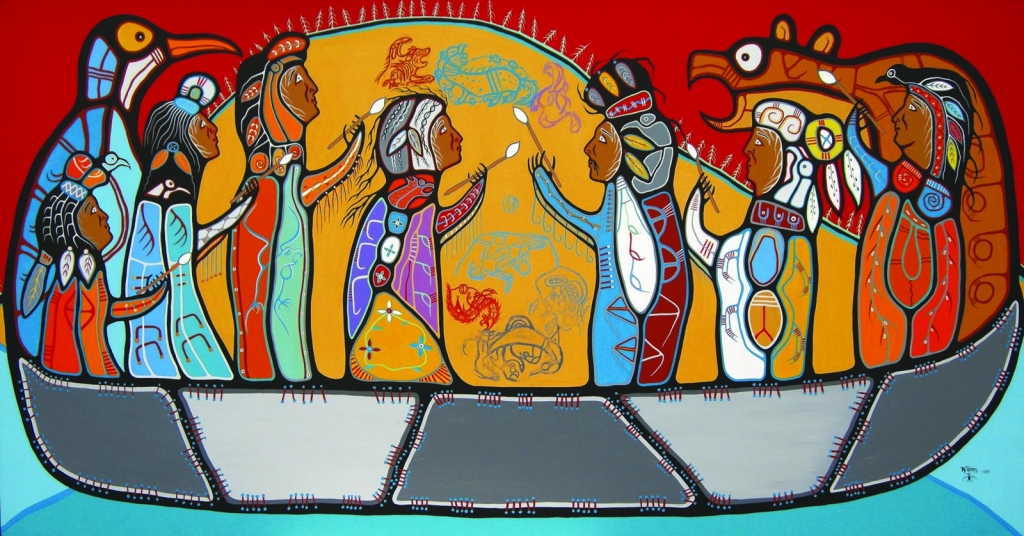 Louise Thomas remembers seeing her husband painting in his studio, music playing softly in the background while he worked on multiple projects that contained strong vibrant colours.
“I would ask, ‘How do you know where to put that colour?’” Louise recalled, smiling at the memory. “And he would say, ‘Lovely, I just know.’”
The use of colour was a key feature in the works of Roy Thomas, an Anishabe artist from Long Lac. Vision Circle: The Art of Roy Thomas A Retrospective, is an exhibit that opened on June 7 at the Thunder Bay Art Gallery.
More than 60 pieces of Thomas’ paintings, ranging from his earliest to latest works, is on display at the art gallery until Sept. 9.
Thunder Bay Art Gallery director Sharon Godwin said they have always wanted to put on a big show dedicated to the Ojibwa artist.
“It was important that we do it in Thunder Bay because this is where Roy spent a great deal of his life and his family is here,” she said.
The gallery brought in the various works from public and private collections from all over Canada and one from the U.S. for their first solo exhibit of Thomas’ work.
“Roy really deserved recognition,” Godwin said. “He is one of the finest Canadian artists and I don’t think he had the recognition he deserves.”
Born in 1949 and raised in Long Lac, Thomas was guided by the memories of his grandparents as child, and they taught him how to paint. The first time he drew, he used his pointing finger to draw figures on his grandmother’s back as she told him stories. Later, he used a stick on the ground, snow, and beach.
According to the Ahnishnabae Art Gallery website, Thomas would tell his grandparents that these drawings would disappear. His grandparents told him, “One day my grandson, these drawings will come back to you, what is yours is never gone away forever.”
Thomas’ work is often categorized as the “so-called Woodlands style” of painting, though Godwin said, “It’s not label I don’t think Roy was keen on.”
Lac Seul artist Ahmoo Angeconeb said he had heard about Thomas for many years and admired his work. In the mid-80s, he finally met him when Angeconeb moved to Thunder Bay.
“I thought he was a really great guy,” Angeconeb said of his first impression of Thomas. “He had a great sense of humour and he also liked to share and teach.”
Angeconeb, who said he was honoured to hold the opening prayer and ceremony of the exhibit, admired the teachings that go with Thomas’ work.
“For example, the importance of the four sacred gifts: water, land, air and fire,” Angeconeb said. “And also his composition: the way he placed and painted different animals in different arrangements
“And of course the colours. The colours are really vibrant.”
Godwin said Thomas was “technically fine painter” and one of the most notable works in the exhibit is a piece called, “We’re All in the Same Boat.”
The piece was painted in 1984 after Thomas was in an exhibition at the Art Gallery of Ontario with six other Woodland artists. It features the six artists: Norval Morriseau, Carl Ray, Daphne Odjig, Joshim Kakegamic, Blake Debassige and Thomas himself, in a boat with their own paintbrushes painting their own works on a rockface.
Thomas moved to Thunder Bay in 1989 and lived there until he died of cancer in 2004.
Louise spoke about meeting her future husband during the exhibit’s grand opening.
As a single mother, Louise said Thomas entered her life when she attended a dance with a friend. There, they ran into a friend, Harold.
“And Harold comes in with a striking friend,” Louise recalled. The man was Thomas, but since Harold was a counsellor at an institute, “I thought Roy was one of his clients,” Louise recalled and the crowd laughed.
“Roy came over and introduced himself and he was confident and you could tell he was proud of who he was and he dressed as wonderful as always,” she said.
Thomas asked Louise to go to another dance, but Louise declined. Then while at work the following Monday, Louise was surprised to see Thomas walk in.
“And I got up and I remember walking around the desk and shook his hand and I thought, This is the man who I’m gonna marry,” she recalled.
When she started to see his work, “I knew this man was special.”
Thomas and Louise opened the Ahnishabae Art Gallery in Thunder Bay in 1997 to “showcase his work and to illustrate and promote the Ahnishabae culture,” according the gallery website.
Thomas is an inspiration to many Aboriginal artists, Louise said.
“And there were times too, he would say, ‘Lovely, I feel my paintings loving me. I just feel the colours,’” she recalled, and then pointed to his various works. “As you can see, when you walk around, colour does amazing things to the human spirit. It just makes you come alive.”