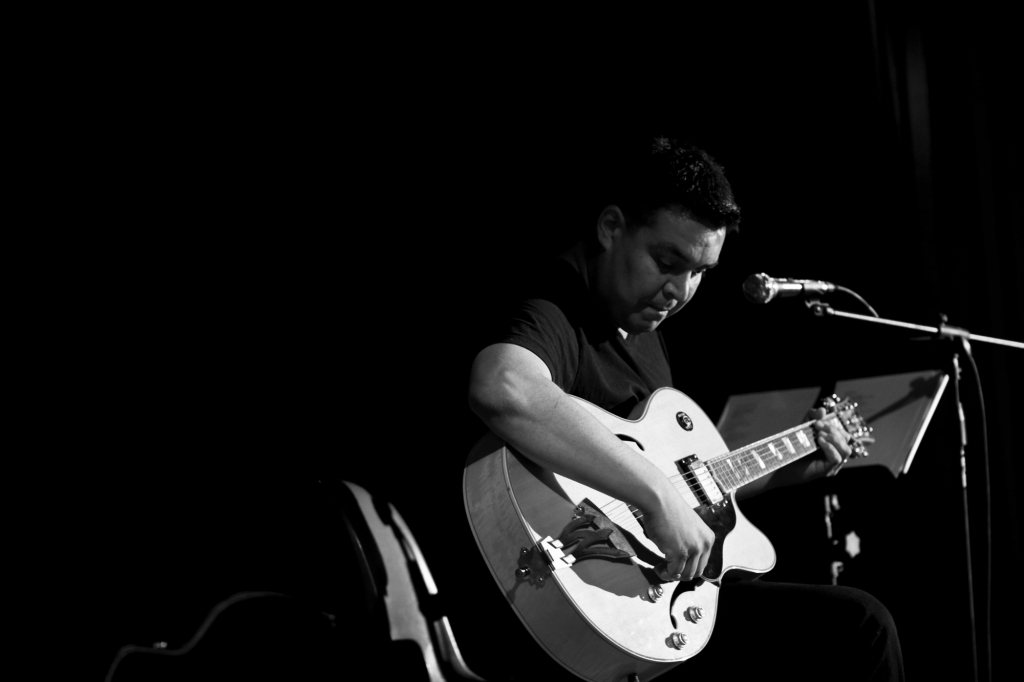 While walking the streets of Toronto in his early-20s, Robin Ranger heard a guitar-playing busker hit a chord that captivated his ears.
Using some of the $40 he had that was to last him three days in the city, the Fort William First Nation member paid the guitarist to play the song again.
“I paid attention while he was playing the song and waited until that chord rolled around,” the 39-year-old recalled. “Then I went back to the hotel, picked my guitar up and made the same chord, and it completely affected the way I played music.”
Up to that point, Ranger was into rock and heavy music like Tool and Ministry.
But the chord – a B-flat minor6 – converted him to a new style. He began to mess around with seventh, ninth and major-seventh chords and wrote songs based on them.
“After a while, another musician friend of mine said, ‘Wow man, this sounds a lot like jazz,’ and I’m like ‘Jazz? I don’t listen to jazz.’
Based on the comparisons, Ranger decided to give the genre a listen. He asked a friend that since jazz is a 100-year-old medium, where should he start. He was recommended Miles Davis’ 1959 album, Kind of Blue. Ranger was immediately obsessed with the album, considered the best-selling jazz record of all time.
“I listened to that, to the exclusion of everything else, for two years,” he said. “And I couldn’t get over it. And I still can’t, and I’ve listened to it millions of times since.”
Ranger’s newfound love for jazz led him to listen to and perform jazz music almost exclusively.
Ranger recently released his first studio album, The View From the Seventh Sky. The name refers to the Seventh Sky, a “cool and happening” café located in the Tower Arktika, the tallest building in Murmansk, Russia, where he wrote the songs.
Ranger had always written songs since he began playing guitar when he was 18, but he lacked the confidence in singing them. Upon returning to Canada, Ranger performed the eight or nine songs he had written overseas and began to develop his voice.
“It was the first time I really started to sing in front of an audience,” he said. “It was a turning point.”
Taking vocal cues from Ralph the Dog of the Muppet Show and famous jazz vocalist Louis Armstrong, it took about two years for Ranger to accept his voice for what it was.
“Really gruff voices,” Ranger said. “Just comes out the way it sounds. It is what it is, and I had to accept that.”
The true moment where Robin found his voice – where it wasn’t shaky – came when he performed at a fundraiser for the B’iindigaate Film Festival in the summer of 2010.
“I don’t know what it was, but it just came together then,” he said.
While Ranger initially listened to horn players, he discovered it’s the bass players he loved.
“The fella that played bass on Kind of Blue was Paul Chambers,” Ranger said. “So anytime that Paul Chambers played bass on a record, I bought it. And he taught me everything I know about jazz.”
And while Ranger headlines his own performances and is the main composer in View From the Seventh Sky, he has more modest goals.
“I don’t want to be a star,” Ranger said. “What I’d really like to be is a bass player. Just stand in the corner in some dark club with a band, and be able to walk through some standards (jazz repertoire). That’s my dream.”
Being a First Nations person, Ranger gets a lot of comments about the oddity of being an Aboriginal jazz musician. Ranger estimates there are about six or seven that perform regularly in Canada.
“Jazz chords aren’t something we hear a lot in our communities,” he said. “As a culture, we’re not big jazz appreciators. I hope that’s changing, because jazz is cool. More people should listen to it.”
Funded by an Ontario Arts Council grant, The View from the Seventh Sky was recorded over two years in a private studio in Thunder Bay.
It can be purchased at the Ahnisnabae Art Gallery in Thunder Bay and sampled online at www.robinranger.ca.