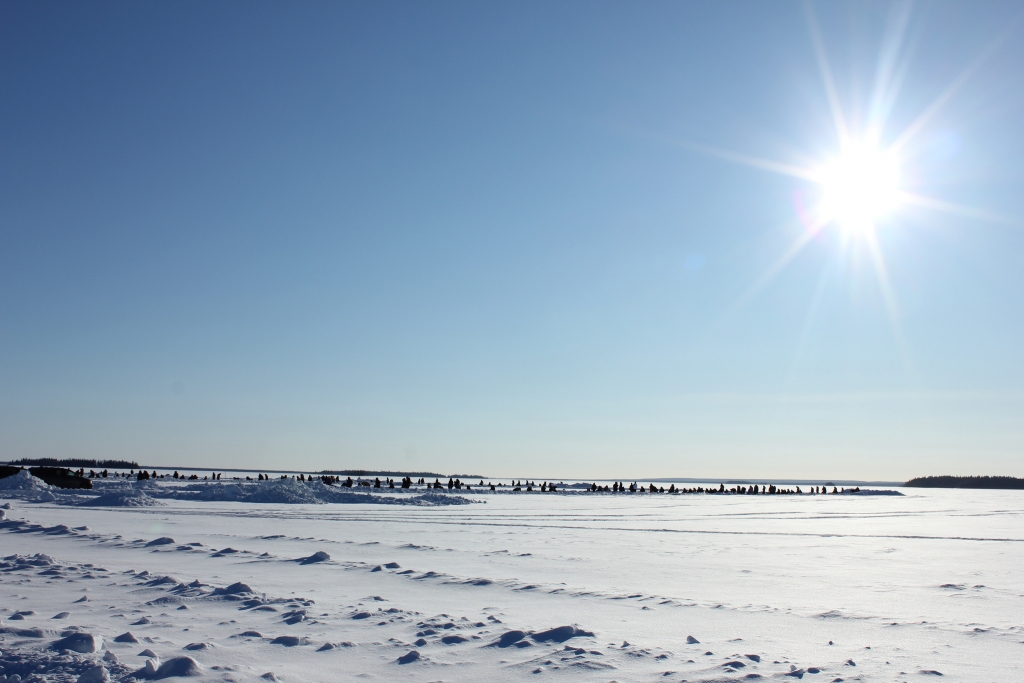 More than 250 people gathered on Sachigo Lake on Feb. 25 to take part in one of the biggest fishing derbies on northwestern Ontario.
All participants dropped their lines into a randomly drawn fishing hole as part of the 9th Annual Sachigo Lake First Nation Ice Fishing Derby, where the first prize was a brand new 2012 Dodge Ram 1500.
When a horn sounded at noon to signal the start of the derby, hundreds lined up to draw a number that determined their fishing hole, which were pre-drilled the day before.
By 2 p.m., Alvin Beardy of Sachigo Lake had yet to catch anything. This is nothing new to the recent Lakehead University grad and store-owner. In taking part in the last seven derbies, he has never caught a fish.
“Just a few nibbles here and there,” he said. “But that keeps me going. It keeps my hopes high.”
For Beardy, the biggest challenge in taking part in the derby is patience.
“And the stress of getting the big one,” he adds with a laugh.
Beardy said that while he tries to prepare every year by buying new lines or lures, he loves that anything could happen. Like last year, when the grand-prize winning fish was caught within the last 10 minutes of the derby.
“There’s a chance for everybody,” he said. “That’s how I look it at. Fish don’t go to one specific spot or lure.”
To help pass the time, Beardy talks to the people around him, which he believes is part of the derby experience.
It’s a sentiment shared by Sachigo Lake Chief Titus Tait, who also brought his line and reel to the derby.
“It’s a get-together,” he said. “I think one of the things we enjoy as Native peoples is that we do things together. We do that, and it benefits the community as a whole.”
The derby also drew in visitors from other parts of the province.
Igor Matic drove for 14 hours from Thunder Bay the previous day to ice fish for the first time. The Macedonia-born 21-year-old grew up in Mississauga, Ont. and had never been anywhere north of Thunder Bay, where he attends college.
“I gotta say, this is nothing like I’ve seen before, that’s for sure,” he said. “I’ve never been on a frozen lake before, so it’s kinda blowing my mind right now.”
Matic was enticed to attend the derby by his friend and classmate, who is from Sachigo Lake. The friend advised him to dress warm, as temperatures could drop to -40 and -50 in the community. Sitting next to his fishing hole, Matic had three layers beneath his snow suit and three pairs of socks.
“I’ve never beeb in this climate here, that’s for sure,” he said. “Made sure to bundle up.”
Matic’s classmate Jordan Bowes loves taking part in the derby. The 20-year-old from Kingston, Ont. took part in last year’s derby and loved the experience.
“It’s a fun trip,” he said. “Just 14 hours with your buddies (on the drive) and taking part in the community event. It’s awesome.”
When 3 p.m. rolled around, optimism rang through the three lanes of fishing holes.
“One hour left,” one participant said. “No worries, no worries.”
To help keep warm and full, participants could buy hot chocolate, coffee, hot dogs and bannock and chili. The items were sold by Grade 8 students at Martin McKay Memorial School, who were fundraising for a class trip to Toronto.
The horn sounded again at 4 p.m. to signal the end of the derby.
The derby had prizes for each of the top 10 winners, which was determined by the total weight of their catch.
Flora Beardy of Muskrat Dam took home the third prize, a 2003 Kia Sorento, with a total weight of 32 pounds. Eli Pivnick, a teacher in Sachigo, took the second prize, a 2004 GMC Jimmy 4X4. His catch totaled 32.4 pounds.
He was barely beaten out for the grand prize, a 2012 Dodge Ram. The prize went to Jackie Nanokeesic of Muskrat Dam, with a catch totaling 32.5 pounds.
Wes Barkman, one of the organizers, called the derby a success, as number of participants at least equaled to that of previous years.
“It went pretty good,” he said. “Everyone had fun, and that’s the main thing.”