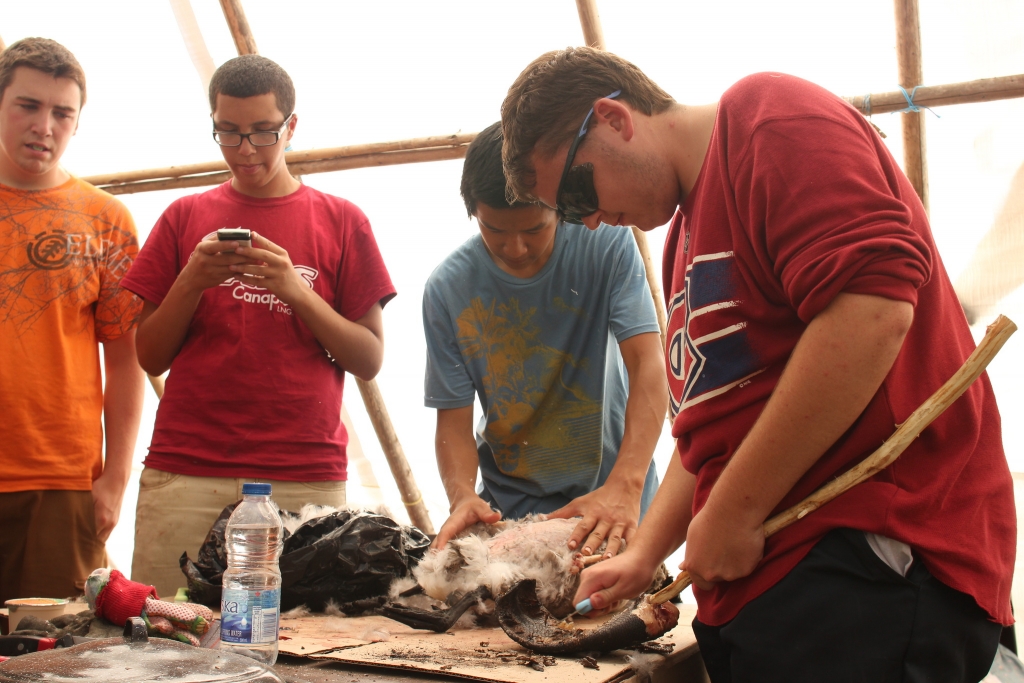 About eight members of the Ontario Ranger Program arrived in Moose Factory to help set up for the Creefest and Gather of Our People (GOOP) festivities from July 25-28.
Consisting of youth from across Ontario, the Rangers (formerly Junior Rangers) assisted in an array of activities, from setting up the tipis, tents, and shaptwon and cutting firewood, to helping prepare traditional foods.
Yassine Boutaya of Hamilton said he decided to come to northern Ontario when a signup sheet appeared at his school.
“It was a random draw and whoever got picked got to come up here to help out,” he said.
The 17-year-old said that while learning about the history of Canada in school, First Nations history was not given much focus.
“I met a lady here, and she offered deep information about it,” he said. “She talked about the inside stories about when the Natives lost their land. And how the Creefest is about communities coming together and being one and having fun.”
Since arriving to the Mushkegowuk territory, Matt Gravelle of Sudbury said the highlight has been helping prepare the traditional foods. Working the traditional cooks, he helped prepare a variety of wild meat.
“It’s interesting to learn how to they clean all the animals,” the 16-year-old said. “(The Elders) treated me great and showed me the ropes. They’re very nice.”
The Rangers were able to taste meat they have never tried before.
“It was different and it was really good,” Gravelle said. “Like the beaver tail, it tasted great.”
While Boutaya previously tried more commercial fish like salmon, he was able to try sturgeon while in Moose Factory.
“And I never had moose meat before and that tasted great. And later, we’re going to taste moose nose and I’m ready for it,” he said.
Boutaya was impressed by the skill of the cooks in plucking geese.
“It was weird and I saw the Elders doing it and they were plucking it like it was nothing,” he said. “And when I did it, it was pretty hard. You have to get in it and use your strength.”
Gravelle was impressed with the community’s reception of the Rangers.
“They’re great. They treat us well and they welcomed us,” he said.
Boutaya said they mostly worked out of Cochrane prior to coming to Creefest and GOOP.
“We did canoeing and stuff like that, but coming here, it brought it up,” he said.
“Everybody is nice, like they want us to be here,” he added.