Mattagami forced to evacuate due to forest fire 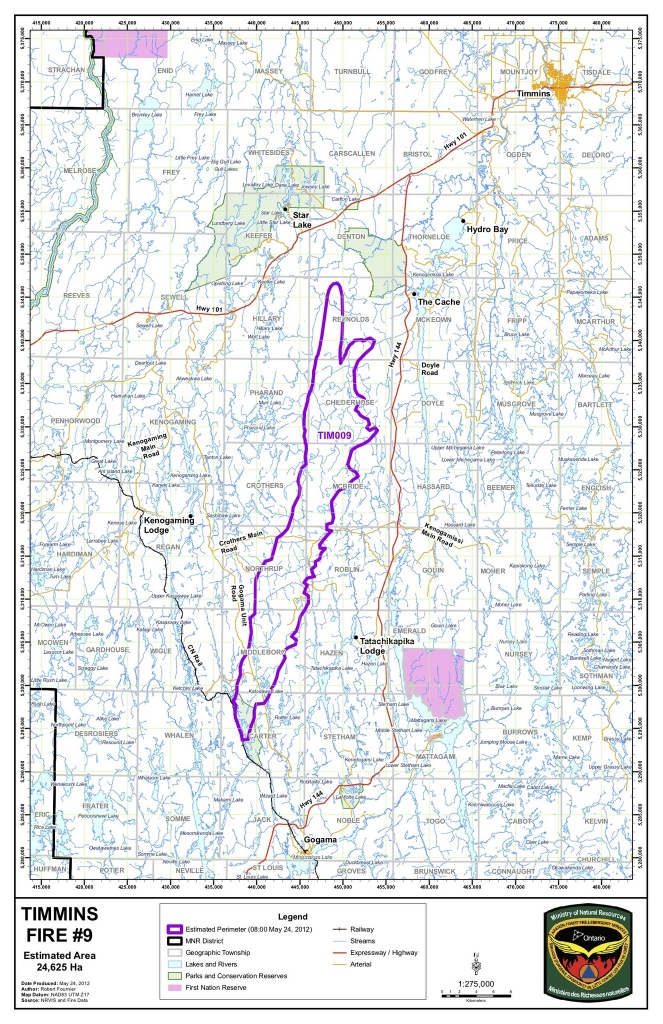 Mattagami First Nation Chief Walter Naveau said it was a trying time for his community when they were forced to evacuate as a forest fire threatened to converge on the reserve on May 23.
“It’s very hard to see your people (go through this),” Naveau said on May 25 in Kapuskasing. “Some of them are crying when the debriefing began,”
On May 23, Naveau declared an emergency as the Timmins No. 9 forest fire burned northwest of the community. More than 190 community members were evacuated – most to Kapuskasing – while Naveau and more than 30 community members stayed behind to protect the valuables and provide updates to the other community members.
The following day, strong winds enlarged the fire to a size of 24,000 hectares and a width of more than 40 kilometres. The fire, which began on May 20 southwest of the Highway 101 and 144 Junction, threatened to cut off the escape route of the reserve.
That afternoon, police told Naveau that he and the rest of the members who had stayed behind needed to leave to ensure their safety. Within a half-hour, the community members rode out north on Highway 144 under a police escort as the Timmins No. 9 fire continued to burn west of the highway.
“We went through the main part where it’s very smoky,” Naveau said. “You could feel it in your lungs – the burning.”
As they drove, Naveau said they could see the fire burning, ashes blowing and “columns of smoke all over.”
“You couldn’t see the sun even though you know it’s there,” Naveau said. “Everything was orange. It was eerie.”
The caravan made it to the Highway 144 and 101 Junction and drove through the city of Timmins before arriving in Kapuskasing in the late afternoon, joining the other community members who were evacuated the evening prior.
Naveau said he could sense the fear in the community members as the caravan drove alongside the burning forest, but as the chief, he kept calm.
“I wasn’t nervous or anything,” he said. “I was calm and as a leader, I have to keep that.”
Naveau said the safety of the community members was his “first and foremost” priority throughout the ordeal, even before the community was evacuated.
“I told my wife, I have to be the last to leave to ensure our people are safe,” he said.
Naveau was able to maintain an air of calm until he reached Kapuskasing.
“When I got to my room, it all hit me: the gravity of the situation for our people,” he said. “And then I had no more energy. I had to lie down and get my energy back.”
The next morning, the displaced community members convened for a debriefing on the situation.
“There are people crying this morning because they were scared,” Naveau said. “And it struck me too. I’m only human.”
The City of Timmins declared a state of emergency on May 24 as billowing smoke darkened the skies of the city. The city also implemented an outdoor water ban. Smoke and ash from the fire led to the closure of the Timmins airport on May 25.
By May 25, the Timmins No. 9 fire reached a size of 31,600 hectares and was 30 kilometres away from the city centre.
The fire continued to grow until May 27, when rain, cooler weather and the addition of 20 four-man crews of firefighters from British Columbia helped to quell the fire. The next day, Timmins lifted its state of emergency for the time being.
As of May 29, the fire was 38,519 hectares in size and 70 kilometres long. It will take weeks to “fully establish lines around (Timmins No. 9),” according to the MNR website.
Meanwhile, with the immediate threat gone, the Mattagami First Nation residents were able to return home on May 28, where there was no damage to the community.
“Everbody is in high spirits,” Naveau said. “When my wife saw her cousins, she broke down and started to cry and hugging. It’s so good to see what people do when they see each other and say, we’re home.”
Naveau commended the police officers who escorted them, the MNR firefighters for protecting their community and ensuring their return home, and the residents of Kapuskasing “for being such good hosts.”
“Our whole community would like to thank Kapuskasing for being very kind and taking care of us,” Naveau said. He also thanked NAN Grand Chief Stan Beardy for calling to check in on the residents.
Despite the end of the state of emergency, all fire restriction zones and implementation orders on Crown land in the area remain. As of May 29, there are 27 active fires in the province, five of which are listed as “Not Under Control,” according to the MNR website.